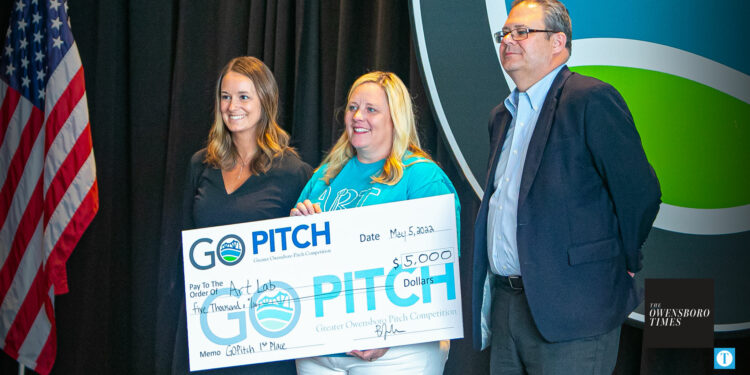 Art Lab Owensboro, which opened April 1, provides high-quality art and STEM activities to children in an environment conducive to experiential learning and individual growth. It is owned by Amy Burgan, an experienced educator, who has also created and sold her own art for 15 years. Art Lab Owensboro will help children see the connections between art and STEM, develop skills in both areas, and create products that use both art and science.

“I’m just so excited,” Burgan said of winning the competition. “It’s encouraging for me to just be able to know that I should just work harder to provide what’s needed. I’m hoping to use the prize money to buy robotics equipment to start robotics for children in the fall.”

Burgan said she’s been pleased so far with the turnout at her business, located at 1722A Sweeney St.

“I’ve had sold out activities,” she said. “I want to have more, I just have to figure out how to work with family schedules and school schedules and how to manage all of it.

Benchsmart Benches is the creation of three Daviess County High School Seniors: Daniel Flick, Noah Clark, and Preston Smith. They created and have produced a bench that allows a person to charge their devices via solar powered electronic chargers. The concept stems from society’s increased reliance on technology, the need for more renewable energy, and peoples’ urge to go outside despite having responsibilities online.

Smith said he was awestruck to both get second and win the crowd vote.

“To win crowd favorite is also very touching because it means that we really resonated with people in the room, not just the people who know the financials and the actual business side of things, but also the public relations side as well,” he said.

Smith said the next step is to make sure they can get a patent for their product, which he said will be unique from other smart benches that can be found online.

The competition was hosted by the Greater Owensboro Economic Development Corporation (GOEDC) and the Owensboro Small Business Development Center. A total of 20 businesses submitted business plans, and a committee chose five finalists. The judges were Aaron Kizer, Allison Ross, David Oetken, and John Marshall Moore, and the winners was determined based on a scoring system.

The other three finalists were Mindful Mushrooms, Sundance & Sam Books, and Tiki Lab.

Mindful Mushrooms is owned by Jill Taylor and Gillian Grant, entrepreneurs and business owners that are trained in mycology – the scientific study of fungi. They have been cultivating small harvests of culinary and medicinal mushrooms and would like to expand their business on a larger scale by offering additional products, such as supplements. They envision selling their gourmet mushrooms to local restaurants and grocery stores.

Sundance & Sam Books will help Owensboro’s readers explore, connect, and create by combining the literary roots of an independent bookstore with the social opportunities of a local coffee shop or neighborhood pub. Molly McCarroll, Founder and Store Manager, wants to make book buying a special experience and create a venue where reading is a joy. McCarroll is a native of Owensboro that wants to demonstrate a commitment to literacy, and to those writers and readers who value it, with a vibrant independent bookstore.

Tiki Lab is a tropical tiki-themed bar that will serve premium quality drinks and a light menu in a relaxed island vibe atmosphere. The bar will be located in downtown Owensboro. Tiki Lab, owned by Daniel and Maria Keaveney, will also offer bartending classes and event rental space. Daniel is a nationally recognized bartender, and both have degrees in the Culinary Arts and Nutrition.