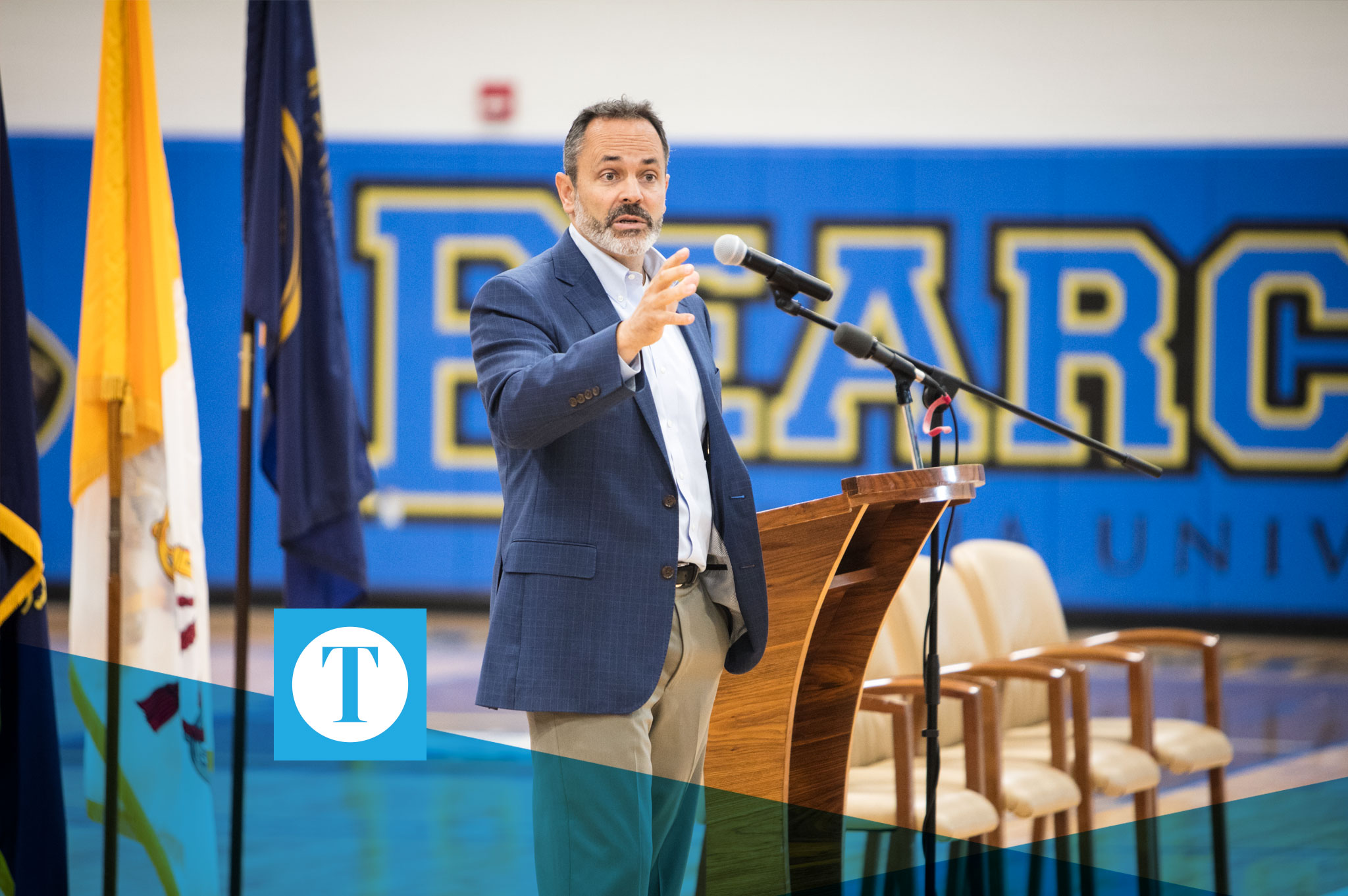 Governor Matt Bevin spoke today at the Brescia University gymnasium as part of an Economic Development Forum hosted by the university.

Bevin began by apologizing for the short notice regarding his arrival, then dove straight into his stance on education, defining it as a necessity and “critical” to the workforce. He went on to say that, with nine children of his own, two of whom are attending college this year, education is “very near and dear to me.”

Several Brescia University students sat in the bleachers to hear Bevin speak, and the governor extended his appreciation for their attendance. He spoke about the teachers of Kentucky, describing their jobs as “a calling.”

“Certain people are called to do certain things,” said Bevin. “For certain people, this is a calling. You don’t do this for the positive feedback. You give a lot of yourself.”

The recent pension crisis that caused strife between Kentucky teachers and Bevin was noted, and Bevin called it “the worst-funded pension system in this state.”

When asked in the public forum whether he still stood by a previous comment made, hinting that Kentucky teachers didn’t have their students in their best interests, Bevin recoiled and said that his original comment–which received backlash across the state–was misconstrued by most everyone.

“With as many family members as I’ve had who are teachers, my issue is not with the teachers,” he said. “My issue is with the KEA.” Bevin blames the KEA for spending millions of dollars toward their own interests.

“I’m the only governor who gave 100 percent of the lottery money toward the education system. I’ve put more money into the pension system than any other state official.”

As for himself, Bevin doesn’t feel students should go to college to seek a career in politics, but they should take on a different career path before considering the alternative. “I didn’t even study political science,” he said.

According to Bevin, Owensboro is on the brink of a major population increase, due to the I-65 spur that will connect Owensboro to the interstate via the William H. Natcher Parkway.

“This whole community is about to explode,” Bevin said. “We want to create an environment of opportunity here in Kentucky,” Bevin added that growing up, he left home at 18 because of the lack of opportunities in his hometown. He said he’d like to keep younger people in Kentucky and create more opportunities for growth.

When questioned about the coal industry and its impact on the environment, Bevin said there was nothing to worry about as Kentucky is currently blessed with an abundance of clean air and water compared to other states.

“Only Alaska has more moving miles of water than Kentucky,” he said.

Bevin added that coal serves as the largest contribution to electricity and that Kentucky was also blessed with an abundance of coal. While solar had come a long way, he said, Bevin think it’s going to be a while before solar energy is implemented in most Kentucky households.

“A lot of things that are good in theory might not be worth it if your tax dollars are subsidizing them,” he said. “We should think twice about what we spend.”

“The consumption of coal in Kentucky has been going down,” said Bevin. He added that for everyone who thinks climate change is due to fossil fuel consumption to remember that America was once covered in ice, and to realize that Earth has been warming since the beginning of time.

When confronted with a promise he’d made three years earlier about legalizing medicinal marijuana in Kentucky, Bevin listened to an outspoken audience member who felt Bevin didn’t keep his promise.

“I did say that,” said Bevin. “There’s no question there’s medicinal value in THC. I’ve always supported that. But the governor doesn’t have the ability to make this happen. When that bill hits my desk, I will sign that. It’s a legislative process.” Though Bevin said he believed marijuana did amazing things for people with cancer and epilepsy, he said he was not on board with passing a bill for recreational use.