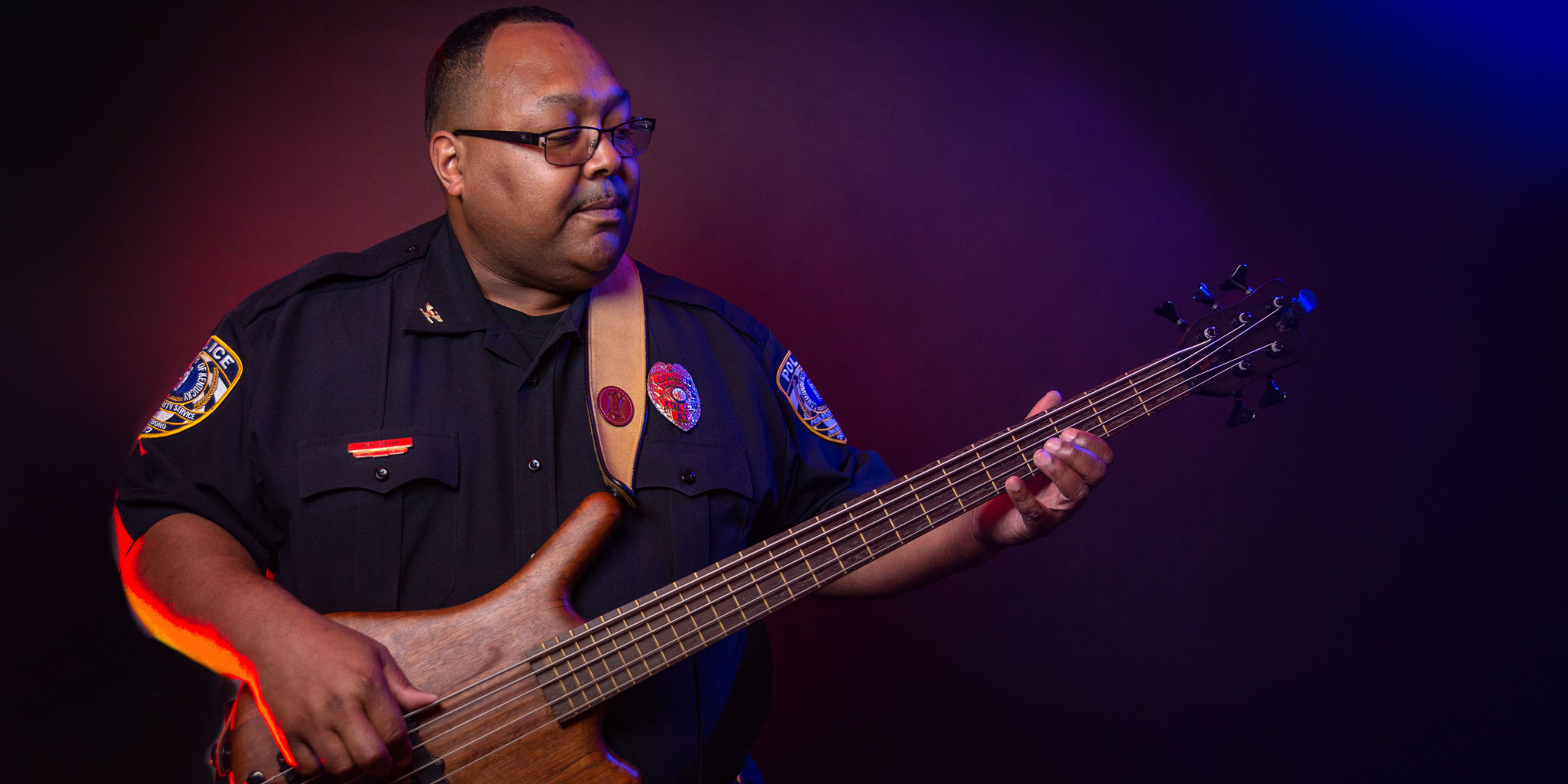 You may have heard that Owensboro Chief of Police Art Ealum was named 2018 “Police Chief of the Year” by the Kentucky Association of Police Chiefs at their executive conference. It was an honor that Ealum said left him feeling “shocked, humbled and blessed.”

But did you know our “humbled” and “blessed” chief also plays a wicked bass guitar?

When he’s not in uniform, Ealum plays bass in the soul, R&B, hip-hop cover band Soulunique, which he’s been in since the late ‘90s. The band has played at the International Bar-B-Q Festival, Friday After 5, Taylor’s Tavern and other Owensboro venues, as well as regionally in Western Kentucky and Indiana.

If you haven’t had a chance to hear Soulunique, they will be playing at Bar Louie on September 7 and the Grandview Fall Festival on September 15.

Ealum says he’s been a bass guy since his Uncle James bought him his first bass when he was a young boy. Once he started jamming with his uncles he never looked back. Even after taking piano lessons, guitar lessons and harmonica lessons, Ealum always stuck to his first
love — bass guitar.

“Bass is just my thing. It brings me peace. With this job, I need to do something. And this is my way to unwind,” Ealum said.

He also credited his deeply rooted family with his love for serving the community. Ealum is from a neighborhood in Evansville where neighbors and family members regularly checked in on each other. People helped each other with whatever was needed and didn’t expect payment because that’s just what you did.

Ealum said it was his mother who inspired him the most.

“When I was a boy, I saw my mom walk to my grandmother’s house twice a day to give her insulin and bring her food,” Ealum said. “Rain, snow, you name it. She was just that kind of caretaker. She gave it her all. Even to this day, at 80 years old, she still looks out for people and helps everybody all the time. It’s just in her nature.”

It was that example of selflessness that inspired Ealum to devote his life to public service.

Now, after 27 years on the force at OPD, including nearly six years as chief, Ealum says he’s nowhere near retiring.

“I’m still committed. I still love the job. And I try to give it my all every day. Especially when I have officers that make it a pleasure to come to work,” Ealum said.

Taking the big picture approach, Ealum said, is the one thing most people don’t understand about his role as police chief.

“My job is to articulate the needs and separate the wants,” Ealum said. “I have to look at everything and consider how every idea or decision affects the public, my officers, the city and everyone involved. Everything from assignments to vehicles to the weapons we carry. All those things. The last person on my list of concerns is me.”

That attitude, along with his willingness to initiate new programs, contributed to his selection as Chief of the Year. But don’t expect him to have a big head about it.

“I’m no more deserving than any other chief,” Ealum said of the award. “The things we do for
our communities [as chief] we should all be doing. So to be singled out is truly an honor. But the people I work with day in and day out, the officers on the street, they make it easy to do my job. I’m truly blessed.”

Home » Features » Community » ‘Chief of the Year,’ Ealum has a soul for service