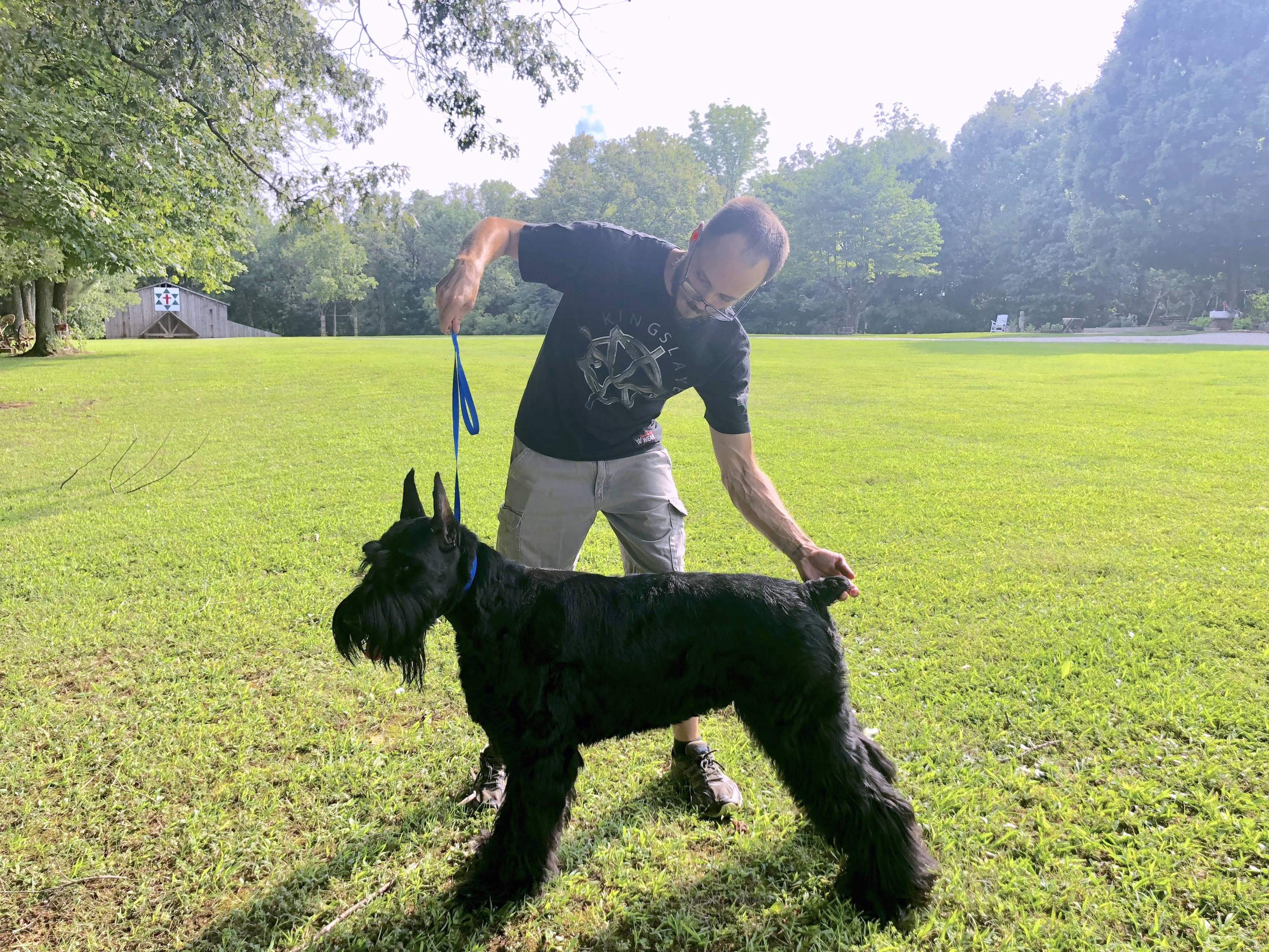 The Owensboro Convention Center has gone to the dogs — or at least it will this week as the 2018 River Valley Cluster Dog Show takes place.

Pooches from the Owensboro River City, Southern Indiana and Evansville Kennel Clubs will participate in the American Kennel Club all-breed dog show, as well as obedience and rally trials, from Thursday to Sunday.

Sam Boyd of Philpot has been in prep mode for weeks as he works with Dean, his one-year-old giant schnauzer, to get ready for their first dog show. “I wouldn’t say I’m nervous,” he said, “But I’m prepared for lots of laughs.”

The preparation will continue until show time for Boyd, who has been grooming and working with Dean daily. Still a puppy at just one year old, Dean is a lovable, 85-pound giant who likes to greet new friends with a loving leap.

“I’m a little bit worried because he still thinks everyone needs a bear hug,” Boyd said.

Dogs of Dean’s size are expected to be protective of their owners to some extent, Boyd said, but they have to be well-behaved for the judges. To aid in keeping Dean calm, Boyd will likely have pockets full of treats at the show.

Boyd is used to helping dogs be at their best. He’s also the man behind The Pet Manny, a local full-service grooming salon. His passion for grooming is what got him interested in show dogs.

He found Dean through Happy Trails Giant Schnauzers, a kennel outside Louisville, and brought him home at just 11 weeks old. Originally he was going to co-own Dean with his breeder, Robin Baker Clifton, who would handle showing the dog. But with Clifton already busy showing dogs of her own, Dean became solely Boyd’s, requiring Boyd to learn the ins and outs of dog shows.

“There’s still a lot I’m learning,” he said. “(Clifton) is great. She’s been doing shows for years so she knows everything.”

It may be Dean and Sam’s first show, but Clifton has been around dog shows since 1979.  “Went to my first dog show with a new puppy, just to see what it was all about, and was hooked,” she said.

She’ll be showing two giant schnauzers of her own at the show this weekend – Cowboy, who happens to be Dean’s father, and Gaucho.

Cowboy, at age two and a half, is the number one Owner-Handled Giant Schnauzer in the country and is the youngest Grand Champion in breed history. Two-year-old Gaucho is working on his championship.

For those outside the dog show world, judging can be a bit confusing. In the simplest terms, dogs are judged within their breed, then move onto be judged within their particular groups, such as hound breeds or working breeds. Then those winners go on to compete in Best In Show.

Cindi Bosley, a longtime member of the Owensboro River City Kennel Club and Show Chair, said they will award two Best in Show winners on Thursday, and a Best in Show winner daily Friday, Saturday and Sunday.  The Thursday show offers two all-breed shows in one day.

“Spectators can enjoy observing the canines being groomed and prepared for the show ring, the actual competition and more,” Bosley said. “The confirmation portion of our shows is similar to the Westminster Kennel Club show that is broadcast in February.”

“Many of the canines travel the United States weekly and attend various shows.  Some of the top-ranked dogs in the country will be in Owensboro this week,” she added.

Beyond the dogs, it’s the friendships she’s made over the years that keep Clifton coming back, show after show. “Getting together to talk, go out to eat and just be around each other is truly the greatest blessing,” she said.

For  Boyd, he’s excited to enter the dog show circuit and make those connections. And, of course, to hopefully bring home a championship.

The show starts at 8 a.m. Thursday – Sunday and ends after Best in Show is announced.  Admission is $5 for adults, $3 for children under 12 and seniors 60+ are $3. To see when your favorite breed shows, check out the judging program here.