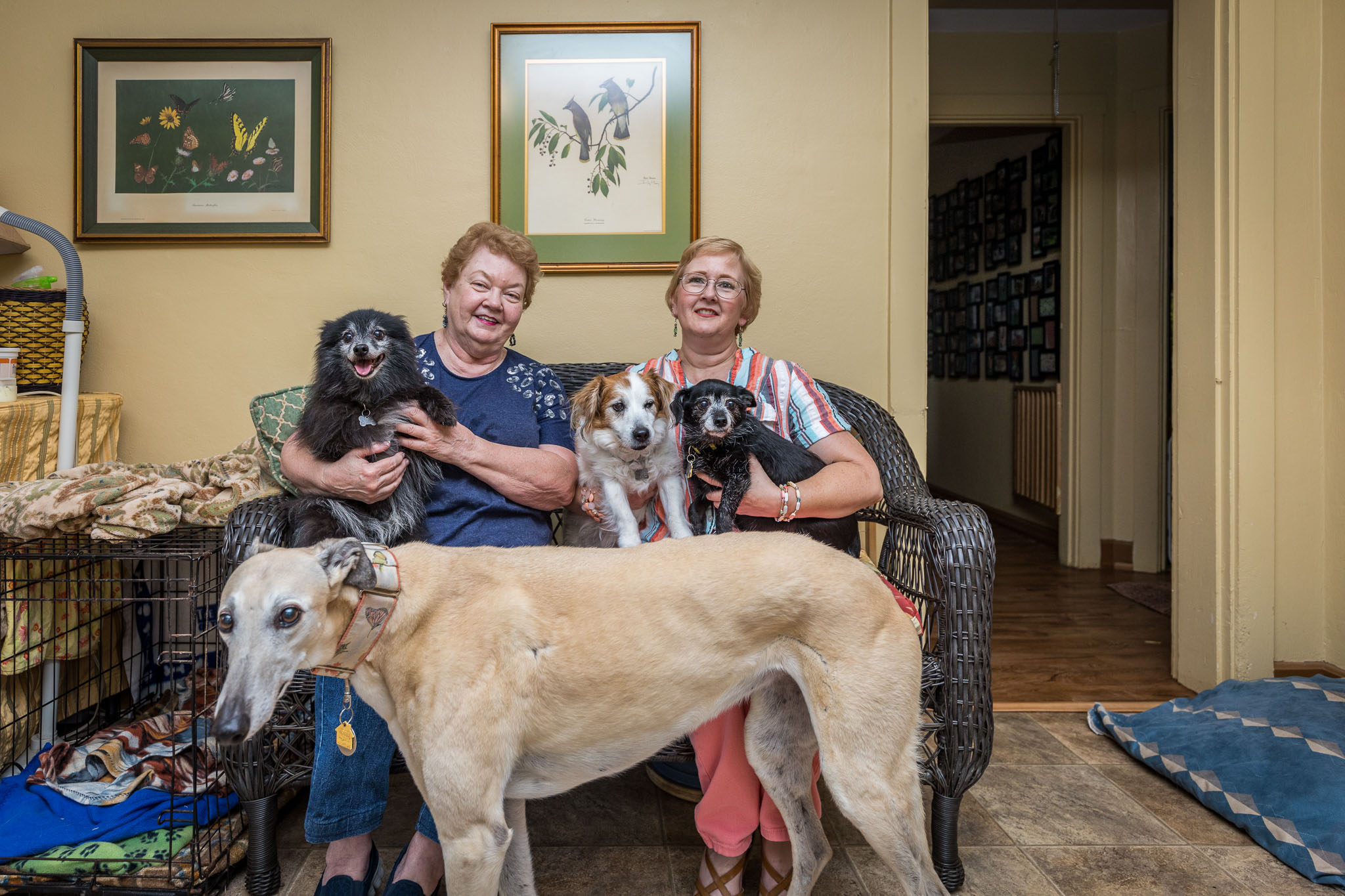 “I don’t know how you do it,” is a comment that Stacey Utley McCarty and her mother, Shirley Overfield, hear often.

The mother-daughter duo is behind the local non-profit Spirit’s Homestretch, an animal sanctuary that takes in elderly dogs that find themselves without a home. The organization’s namesake, Spirit, was a beloved greyhound of McCarty’s and “Homestretch” was both a nod to the dog’s racing background and the fact that the animals are in their last phase of life.

Right now McCarty has 14 senior dogs in her home and Overfield has eight, the oldest in the bunch being 20 years old.

The two have always had a love for animals, but never dreamed they would open up their homes to quite this many. Since opening in 2012, McCarty and Overfield have taken in over 80 dogs. McCarty had as many as 18 dogs in her home at one time and Overfield nine. Dogs have been with the women as short as 27 hours and as long as four years.

“What we do is crazy,” McCarty said. “It’s expensive. It’s heartbreaking. But it’s the most rewarding part of my life.”

Most of the animals of Spirit’s Homestretch come from the Daviess County Animal Shelter.

“They have us on speed dial,” McCarty said.

In the six years that Spirit’s Homestretch has been taking in dogs, they have dealt with just about every physical ailment an elderly dog could have — kidney and liver disease, cancer, heart issues and diabetes are among a long list. McCarty and Overfield estimate they spend an average of $2,500 per month on food, medicine and vet costs.

While they are a non-profit, Overfield says they do not fundraise. They also don’t qualify for much grant money as an animal sanctuary and not an adoption organization, according to McCarty.

They do get community donations and often times the animal shelter will publicize Spirit’s Homestretch on their social media accounts, which helps cover the initial $200 to $300 vet visit upon adoption.

“We don’t take vacations, we don’t have nice clothes or furniture,” Overfield said. “All of that money goes to these dogs.”

McCarty, who clearly has a bond with each animal, agreed with her mother.

“What good is a vacation if you come home to an empty house and what good are nice clothes if they don’t have dog hair on them?” McCarty said.

McCarty and Overfield say that taking in elderly dogs is not the same as owning a pet for its lifetime.

“We know what we are signing up for,” Overfield said.

But both ladies admit that when the time comes to make the decision of when it is time to put a dog down, the decision is made based on the dog’s quality of life.

“I would rather it be a day too soon for me than a day too long for them,” McCarty said.

With the goal to prevent suffering, Spirit’s Homestretch will always make the tough decision when it’s needed, but that doesn’t mean it’s not sad.

“What eases the pain is knowing there are still so many more that need me,” McCarty said.