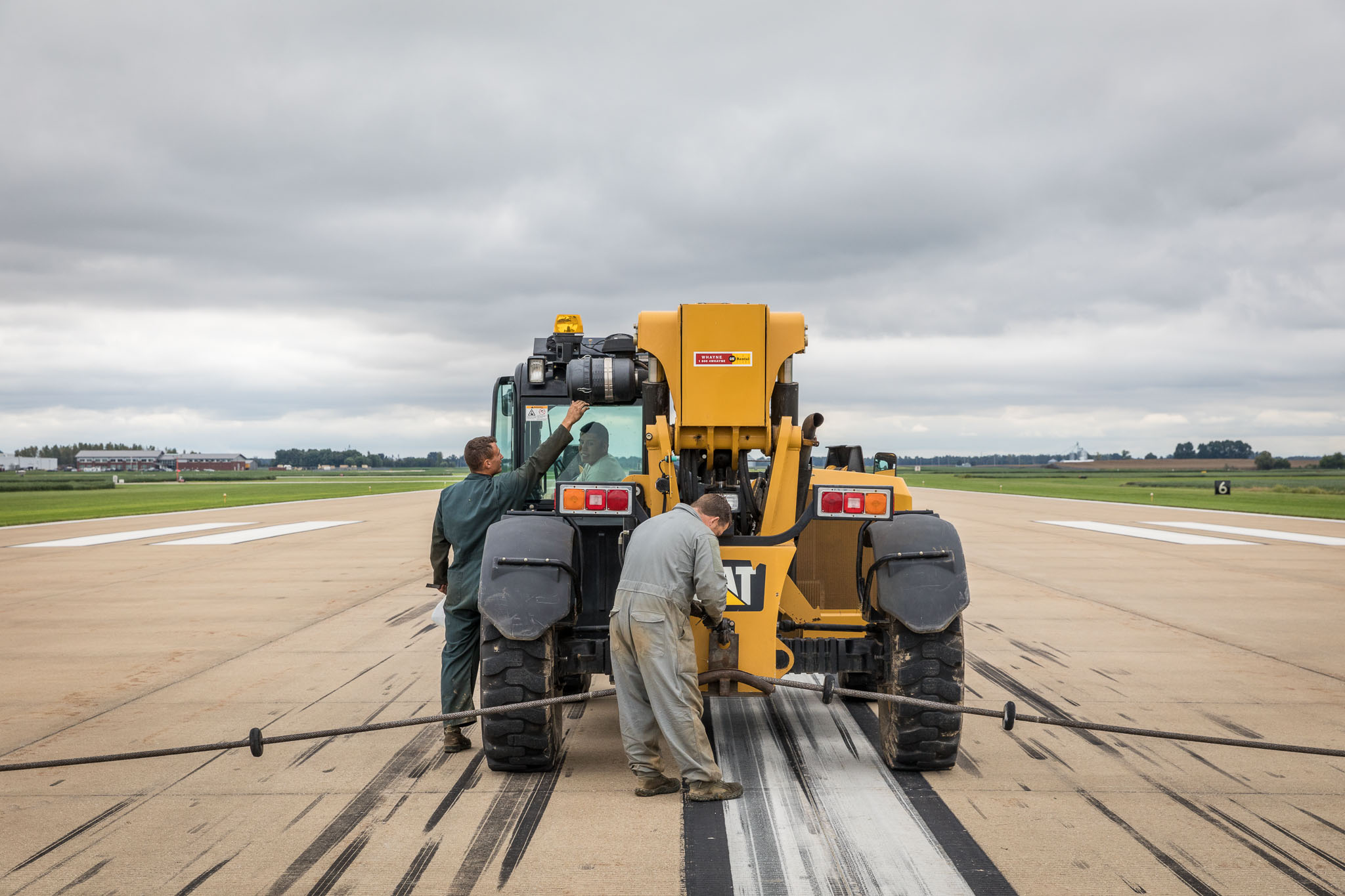 Blue Angel F/A-18 Hornets are shiny, sleek and agile. They’re also fast — their top speed at the Owensboro Air Show this Saturday and Sunday will reach 700 miles per hour leaving crowds dazzled by their aerobatics, speed and precision.

Those same crowds probably have not imagined what would happen if a Blue Angel had an in-flight emergency and needed assistance coming to a stop when it landed. How do you stop a 30,000-lb fighter jet coming in hot at 150 mph?

The answer is a Mobile Aircraft Arresting System (MAAS), required by the military wherever fighter jets are operating. Permanent bases have permanent systems, but crews install mobile systems for events such as air shows or presidential visits escorted by fighter jets.

A seven-man Air Force crew from the 823rd Red Horse Squadron out of Hurlburt Field, Fla., has been in Owensboro since Saturday, installing the arresting system on the 8,000-foot runway at the Owensboro-Daviess County Regional Airport.

Set up about 1,500 feet from the end of the runway, to give the plane room to touch down, the system includes a cable that is stretched across the runway and secured on each edge by two separate units. When a Blue Angel comes in for an emergency landing, it drops its tailhook from the body of the plane so it can snag the cable, which uses controlled friction to pull the plane to a stop in as little as 300-400 feet. The cable attaches on each end to cargo straps that wind and unwind onto large spools.

The system is designed with one main purpose according to Tech Sergeant Harold Normoyle (“Sgt. Norm”), who is leading the execution team.

“The primary mission is to save a pilot’s life,” he said. “Aircraft are expensive, but they’re secondary.”

The units securing the cable at the edge of the runway are each held down by 32 stakes plus six chains driven five-and-a-half feet into the ground with a jackhammer. The crew then tests them by pulling up with a 10,000-pound hydraulic force for one minute. If they see the ground move or shake during the test, they’re instructed to install the system at a different spot. Engineers require the ground to be level and the soil to be of a certain constitution, although it can even be installed in sand.

It takes two full days to install the arresting system, Sgt. Norm said. His crew worked through the driving rain on Saturday.

Once installed, the system has to be certified to make sure it works properly. An oversized forklift tested the cable on Monday, and a Blue Angel is scheduled to test it on Wednesday.

Small rollers keep the cable up off the runway so the hook can grab it. The cable can quickly be taken off the runway to allow other planes to land normally, so it is only in use when the Blue Angels are flying. While the jets won’t be fully loaded with fuel and weapons for the show, the system is rated to stop even heavier planes, up to F-22s.

“It’ll stop anything with a tailhook,” Sgt. Norm said.

He just returned from a scouting trip to Argentina, where his crew will be installing the arresting system for the G20 Summit the United States is participating in this November. His crew is one of five or six around the country keeping the Blue Angels and other fighter jets safe with their engineering know-how and ability to execute.

Every Blue Angel pilot appreciates it.

For information on the Owensboro Air Show, visit www.owensboroairshow.com.