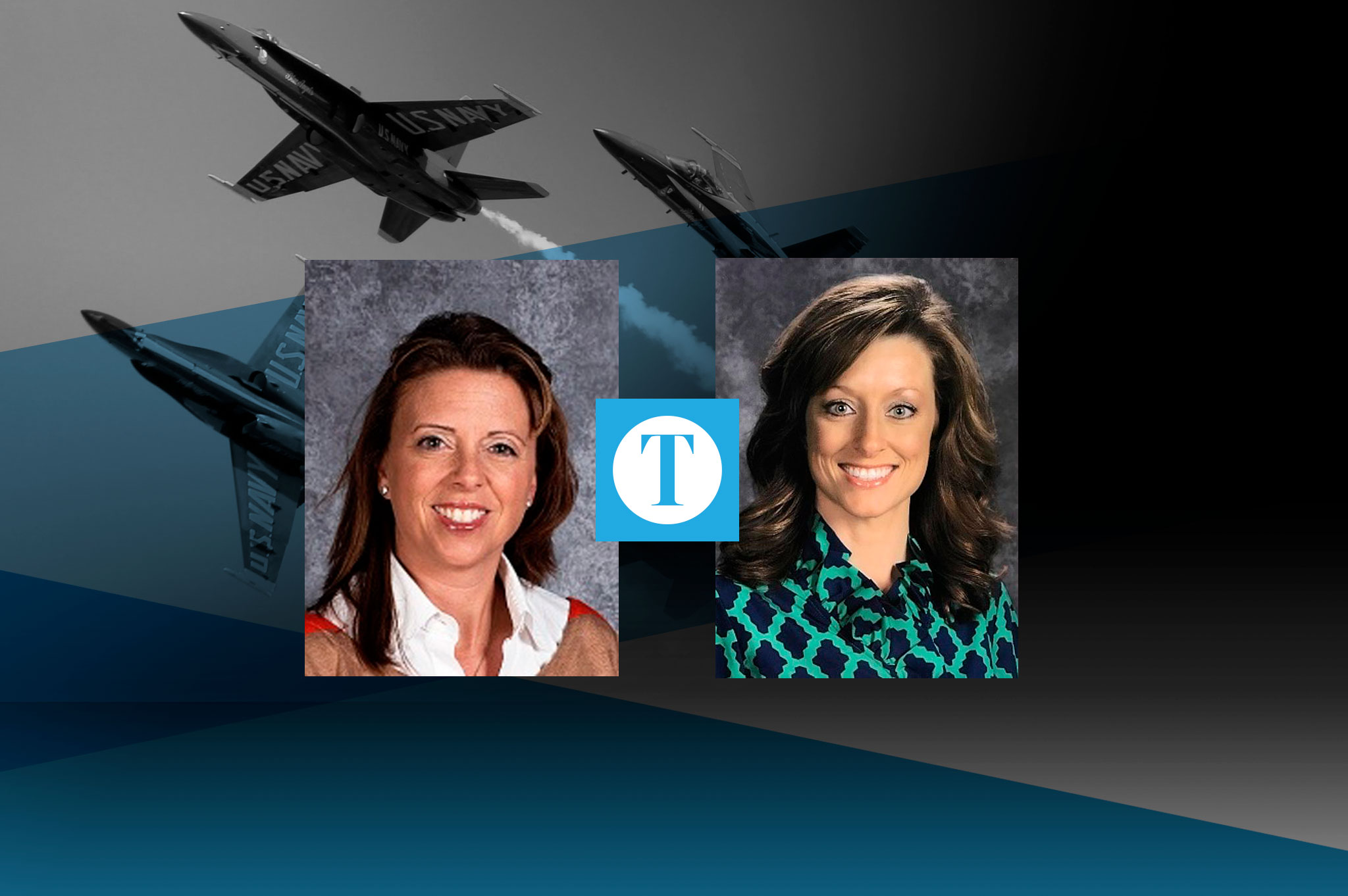 Leslie Peveler and Tricia Murphy were selected to fly with the Blue Angels.

When Whitesville Elementary School principal, Tricia Murphy, Ph.D., created this year’s school theme, “The Sky’s the Limit,” with her leadership team this summer, she may not have realized that she would soon be a literal example of the phrase.

Murphy and Highland Elementary School principal Leslie Peveler were recently selected to fly with the Blue Angels as Key Influencers in the community.

According to an email sent to both principals by the Director of Public Events for the City Of Owensboro, Tim Ross, the Blue Angels were searching for certain qualities in the fly-along candidates this year.

“The Blues are looking for people who help to shape attitudes and opinions of youth in their communities,” Ross said. “Numerous people from the Owensboro community were nominated to the Navy Blue Angels team as being Key Influencers to the youth of our community.  We are excited for Tricia and Leslie to have the opportunity to experience a flight with the Blue Angels and share their experience with everyone.”

Prior to their selection out of about a dozen community members, Murphy and Peveler had to submit short biography pieces detailing how they have impacted the lives of the youth in the community, as well as complete medical paperwork verifying they would be physically capable to fly in the F-18.

When Murphy found out about her selection this past Friday, she said it was still “a little surreal.”

“I really wanted to say, ‘That sounds like the craziest thing I’ve ever heard,’” she said. “It’s a bit of a mental struggle for me. Every video I’ve watched, everyone has either passed out or thrown up.”

Although Murphy laughed at either consequence, she believes that this experience will be a powerful example for Whitesville students to learn how to push through life’s fears and challenges.

“I think the message that it sends to kids is that you have to take a risk…to really push yourself and challenge yourself,” she said. “In order to be really great at what you do, you really do have to step outside of your comfort zone.”

Murphy said she does not necessarily see herself as a key influencer, however, she does see where she has the opportunity to influence others and views this as just one more example.

Leslie Peveler, whose husband served in the military, has similar feelings to Murphy, in that she too is excited about the once-in-a-lifetime experience but is still a little nervous about the outcome.

“I’m probably most nervous about maneuvers,” Peveler said. “I’ve been watching videos, preparing…I love roller coasters, but I hope I don’t faint or throw up.”

Peveler hopes the students at Highland learn several lessons through her journey. She believes that overcoming both fear and failure can lead to very powerful learning opportunities.

I just really think that it is important for our kids to see our willingness to take risks and have courage,” she said. “I think this is the chance of a lifetime and  think my kids at school will think it’s amazing.”

Both women were nominated by another individual in the community, both have watched videos in preparation and they both (not so secretly) hope that their pilots will do a flyover above their respective schools.

Local 14 News anchor Shaelie Clark was also selected to fly with the Blue Angels, which means three influential women in the Owensboro community will have the opportunity to soar into the sky in an F-18 Hornet on Wednesday.