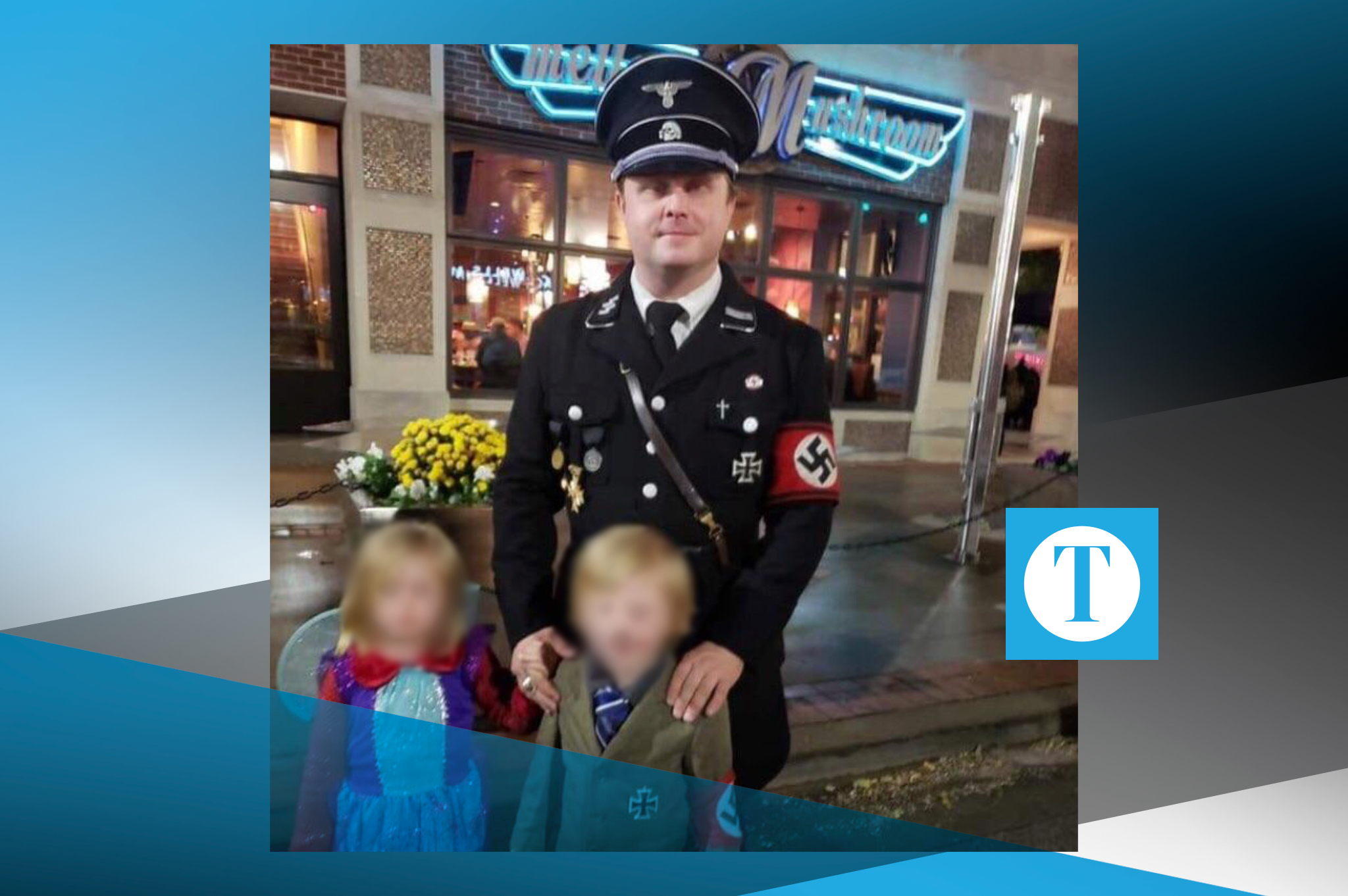 While there were more than 5,000 trick-or-treaters at Thursday’s Trail of Treats in downtown Owensboro, two costumes stood out in the crowd, sparking outrage and making headlines across the country.

Bryant Goldbach, of Owensboro, attended the event dressed as a Nazi soldier and dressed his 5-year-old son as Adolf Hitler.

A photo of Goldbach and his son spread across Facebook quickly Thursday night. His personal page was flooded with negative comments from the Owensboro community, as was the business page for Goldbach Watch & Clock Shop, a business that Goldbach said has been closed for two years.

The photo of Goldbach and his son went further than just Owensboro. Evansville Courier & Press, Lexington Herald-Leader, The Daily Dot, The Alan Cox Show on iHeartRadio and Yahoo.com all picked up the story.

The photo was also posted to Reddit by Mikey Brown, of Owensboro, who said he was offended by the costumes and believed others needed to be made aware.

“I believe everything can be funny in the right light, but this was a public event with a lot of children present,” Brown said.

A moderator of the subreddit eventually locked comments on the post because of the negative conversations taking place, but the post still has nearly 36,000 upvotes. The popularity of the post was enough for it to temporarily make the front page of Reddit.

Goldbach said he loves history and often portrays historical figures. Last Halloween he was a Confederate soldier and the year before that a Catholic priest.

When his son asked to match his costume this year, Goldbach said he “didn’t think it through.” History plays a big part of his family’s life, said Goldbach, who performs in both Civil War and World War II reenactments. In September, Goldbach played a German soldier in WWII Days, a reenactment event in Rockford, Ill.

“I wasn’t trying to make a statement or put my son in any position,” Goldbach said. “It was bad judgment. I want people to know I am sorry.”

Goldbach said that he is not a racist and believes white supremacy to be “disgusting.”

“My brother is half-Iranian,” Goldbach said. “I have black friends. My last name is Jewish.”

Because Halloween costumes portray “blood, gore and villains,” Goldbach said he did not think portraying a historical villain would be any different.

“I now understand what that costume means to other people,” Goldbach said.

However, Goldbach said the extreme nature of the comments he has received has scared his family.

“I understand that people are mad, but please leave my family alone,” said Goldbach of the multiple death threats he says he has received.

According to the father of four, he has been threatened he would be “beaten with bats,” and that he “needs to watch over his shoulder.” Out of fear, Goldbach says he and his wife are limiting their time outside of their house.

Lori Thurman, a member of the NAACP and local educator who has been teaching for 24 years, said she is disappointed at the social media response she has seen from Owensboro.

“Would I have dressed my son like that? No. But I wouldn’t spew hate like that either,” Thurman said.

According to Thurman, it is the “in-your-face” nature of this racism that has caused the public uproar. Thurman said racism exists in Owensboro every day, but it is more of a “polite” version, where people are not even aware that what they are doing or saying is racist.

Goldbach’s viral photo comes at a time when national attention has been brought to Halloween costumes after Megyn Kelly defended blackface. On her show Wednesday, Kelly questioned why dressing up in blackface for Halloween is inappropriate and further defended a reality TV star who darkened her skin to dress up as Diana Ross. NBC announced Friday that Kelly’s show will no longer be aired.