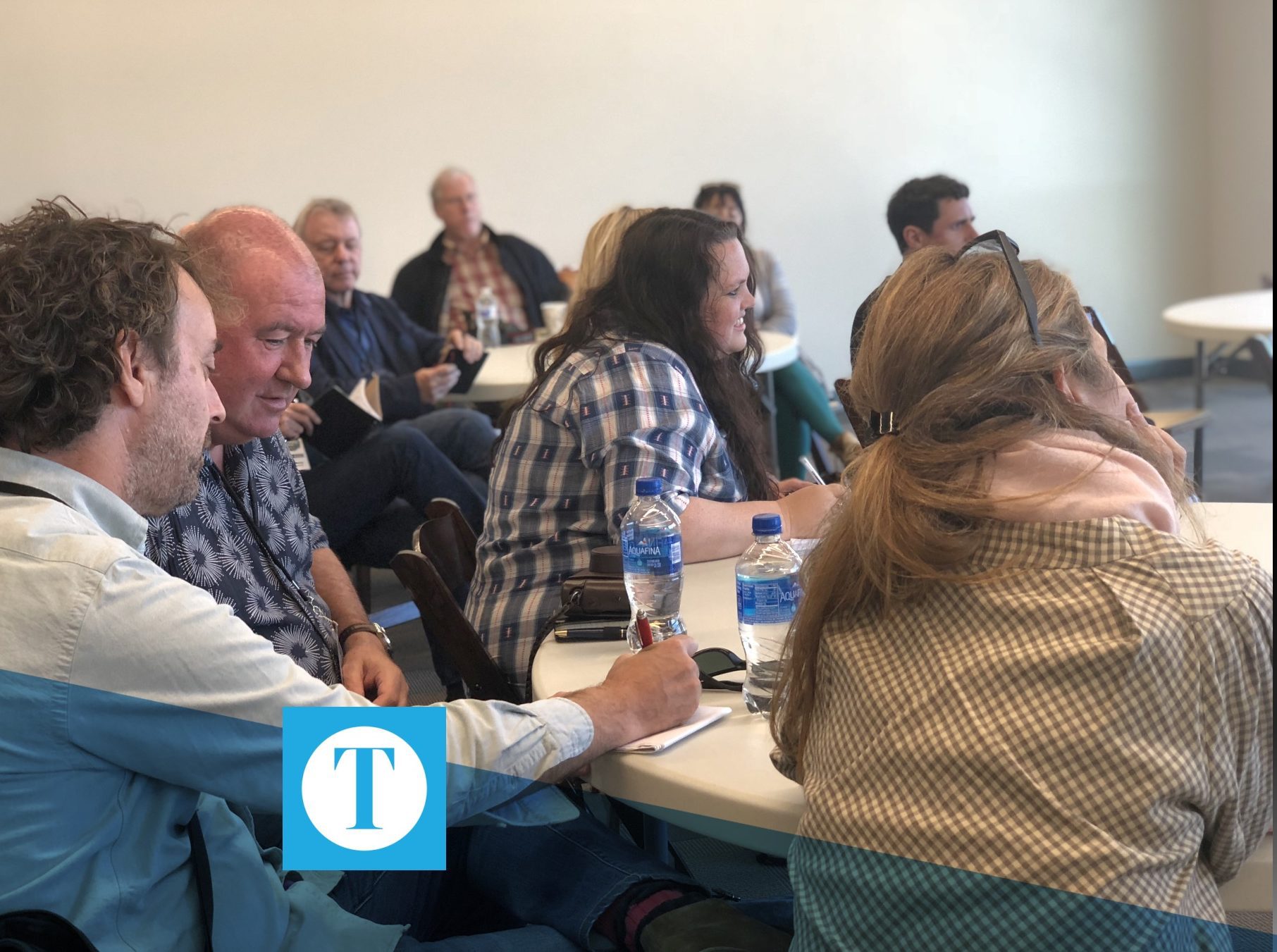 International writers visiting Owensboro had the opportunity to interview Yonder Mountain String Band at the Bluegrass Hall of Fame and Museum Saturday. | Photo by Owensboro Times

A group of international journalists and media personnel are visiting Kentucky, and their trip has included two nights in Owensboro for the grand opening of the Bluegrass Music Hall of Fame and Museum. Owensboro Daviess County Convention & Visitors Bureau (CVB), in collaboration with the Kentucky Department of Tourism (KDT),  is hosting the guests from Oct. 15-22 as they gain first hand experience of the local culture.

Dave Kirk, who works in destination management for the CVB, says he wanted the group to get a glimpse into the bluegrass music culture after experiencing both the bourbon and barbeque aspects of Kentucky earlier in the trip.

Originally from Pennsylvania, Susan Schwartz resides in London and writes travel articles as a freelance writer and blogger. Schwartz said she’s been surprised by the “wonderful” hotels and hospitality Owensboro has offered.

“As an American having never been to Kentucky, and being from the northeast, I guess I’m blown away by the sophistication of the little towns [in Kentucky],” Schwartz said. “These cities have such vibrant, young, hip scenes, and I guess I wasn’t really expecting that from small-town America in Kentucky because I don’t really feel that when I’ve been to small towns in Pennsylvania.”

Three other writers agreed with Schwartz that Owensboro and the other parts of Kentucky they’ve visited have been an eye-opening experience for them regarding culture, hospitality and scenic beauty.

London native Neil Hennesy Vass, who writes for the publication About My Generation, etc., regarded Owensboro as the kind of place where people find genuine interest in the lives of others.

“I think there’s a lot of pride about what Kentucky is and what it represents — its hospitality and that kind of warmth that goes through it and, of course, the bourbon and the horses — the two big kind of drivers toward money and tourism, I suppose,” Vass said.

Trying different brands of Kentucky bourbon has been an exciting experience for the writers, whom said London doesn’t yet offer the same variety but has increased its bourbon importation exponentially in recent years.

The group has traveled to various locations on the Kentucky Bourbon Trail since they’ve arrived in the state, including Maker’s Mark Distillery. They’ve also traveled to Lexington to watch horse races at Keeneland Race Course. Their Owensboro trip has primarily been focused on Bluegrass music as the group attended concerts held at the Bluegrass Music Hall of Fame and Museum’s grand opening on Friday night. The group was given the opportunity to interview the weekend’s headliner — Yonder Mountain String Band — on Saturday.

“It’s part of the Kentucky experience packaged for us which, to me, seems to be adequate,” Vass said. “We’ve been to the races, we’ve been to the distilleries, and now we’ve been exposed to a significant amount of bluegrass.”

While most of the travel writers were fairly unfamiliar with bluegrass music before Friday night, they’ve found a new appreciation for it since gaining first hand exposure to it in Owensboro.

“Even for someone who may have never listened to a bluegrass song, [English music] is influenced by a lot of Americans,” Schwartz said of the originality of bluegrass music.

The writers said they feel strongly that the Hall of Fame in Owensboro is, not only a positive for the community, but also something they wish they saw more of in London, adding that they couldn’t remember the last time a museum had been built in dedication to their music culture.

Coming from a group of people who’ve had various experiences during their travel, the group had nothing but positive things to say about Owensboro’s community.

“There seems to a real pride in the serving people and looking after people in the service industry whereas elsewhere it can just disappear — it just doesn’t exist,” said Robert Spellman, of London. “There’s this thing of presentation, of looking someone in the eye and saying, ‘Here you are’ and ‘Have a nice day.’ There’s an importance of people here getting on, and on an everyday level, which is different to Britain, in a way.”

Schwartz completely agrees. She recently told her mom that if she ever moved back to the states, she’d choose to live in Kentucky.

“I really have loved every single minute of it.”