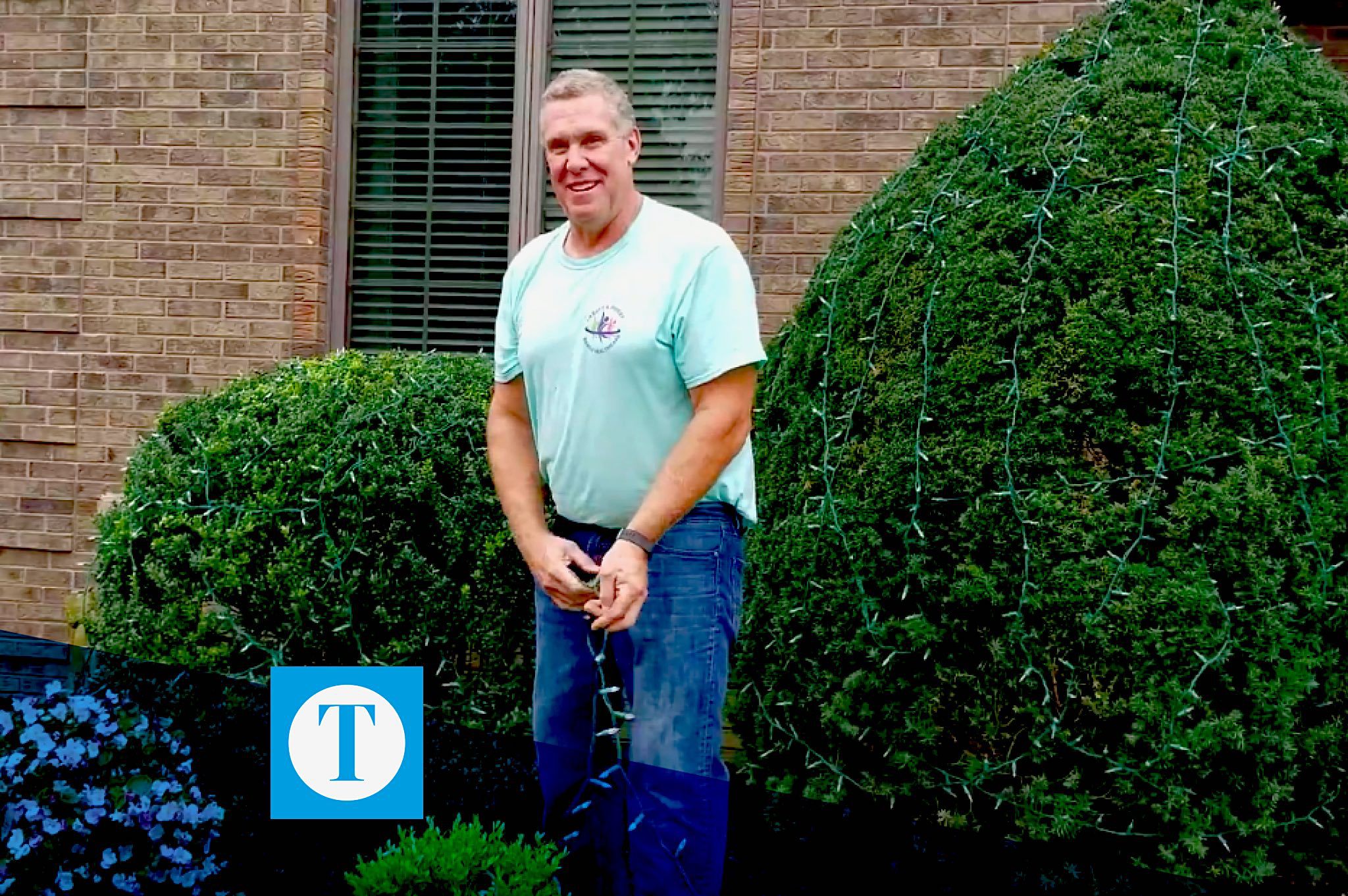 The second Saturday in October finally saw the arrival of cooler weather, signaling the commencement of pumpkin picking and other fall activities.

Jeff Lashbrook, however, had a different plan in mind. With just 73 days left until Christmas, Lashbrook began hanging up his first Christmas lights.

This will be the 25th year for the Lashbrook Christmas light display at Stonegate that brings thousands of visitors from various states to Owensboro each year.

With all three children grown, two of which studying for professional exams this weekend, Lashbrook was on his own to start wrapping the bushes out in front of the house.

Four years ago, this same house appeared on the ABC show, the Great Christmas Light Fight. This past Christmas, 2017, the show contacted the Lashbrooks about a second appearance.

They were told that this year needed to be different than the last visit, so Lashbrook and his son Tyler spent the summer researching and creating new items for this year’s display. Unfortunately, the show did not have enough participants and has decided to delay production for one more year.

“They were going to do a rematch, and only had 3 houses, not four. So they’re going to wait a year, thinking they’ll get another person,” Lashbrook said.

Even though ABC may not be paying a visit this year, Lashbrook is aware that thousands of drivers-by still will, so he intends to continue to make this year’s display bigger and brighter.

“We’re going to put in a big 20 ft. snowman. We thought we were going to be on the show, so we worked on it all summer,” Lashbrook said. “There’s one in Greece that’s 19 ft. We only found one in the world, so we decided, well, we’ll make it a little taller. It’s unlike anything else out there; it’s one-of-a kind.”

While he does not plan to have all of the decorations up until the weekend following Thanksgiving weekend this year, Lashbrook does plan on having the snowman ready.

He has already taken down the tree on the corner of the lot in order to clear the perfect spot for the snowman Due to its immense size, it will require a forklift for assembly.

The tree on the corner is not the only tree Lashbrook anticipates taking down this year.

“This is probably the last year for my Christmas tree,” Lashbrook said, referring to the towering Spruce tree on the side of the lot near the street. “They did highlight that tree when they did the show. It’s the prettiest that tree ever was.”

While it does pain him to think about chopping down the Spruce, he does plan to add a new lighted tree this year.

Lashbrook has switched many of the lights over to LED lights in recent years, using about 200,000. He alternates between white lights and warm lights and said he only uses about half of what he used to because they (the LED lights) burn longer.

“I like them in a way, just because the electricity bill’s a little better,” Lashbrook said. “But they’re expensive to buy and you can’t fix ‘em (like the old lights).”

Lashbrook, who still works 60 hours a week, does not have a timetable this year now that he doesn’t have a show to prepare for. He still looks forward to his children helping in the coming weeks and said, “When it gets done, it gets done.”

The Lashbrooks will also be featured in an upcoming issue of Kentucky Living magazine as one of the Top 5 Kentucky Homes that “does Christmas big.”