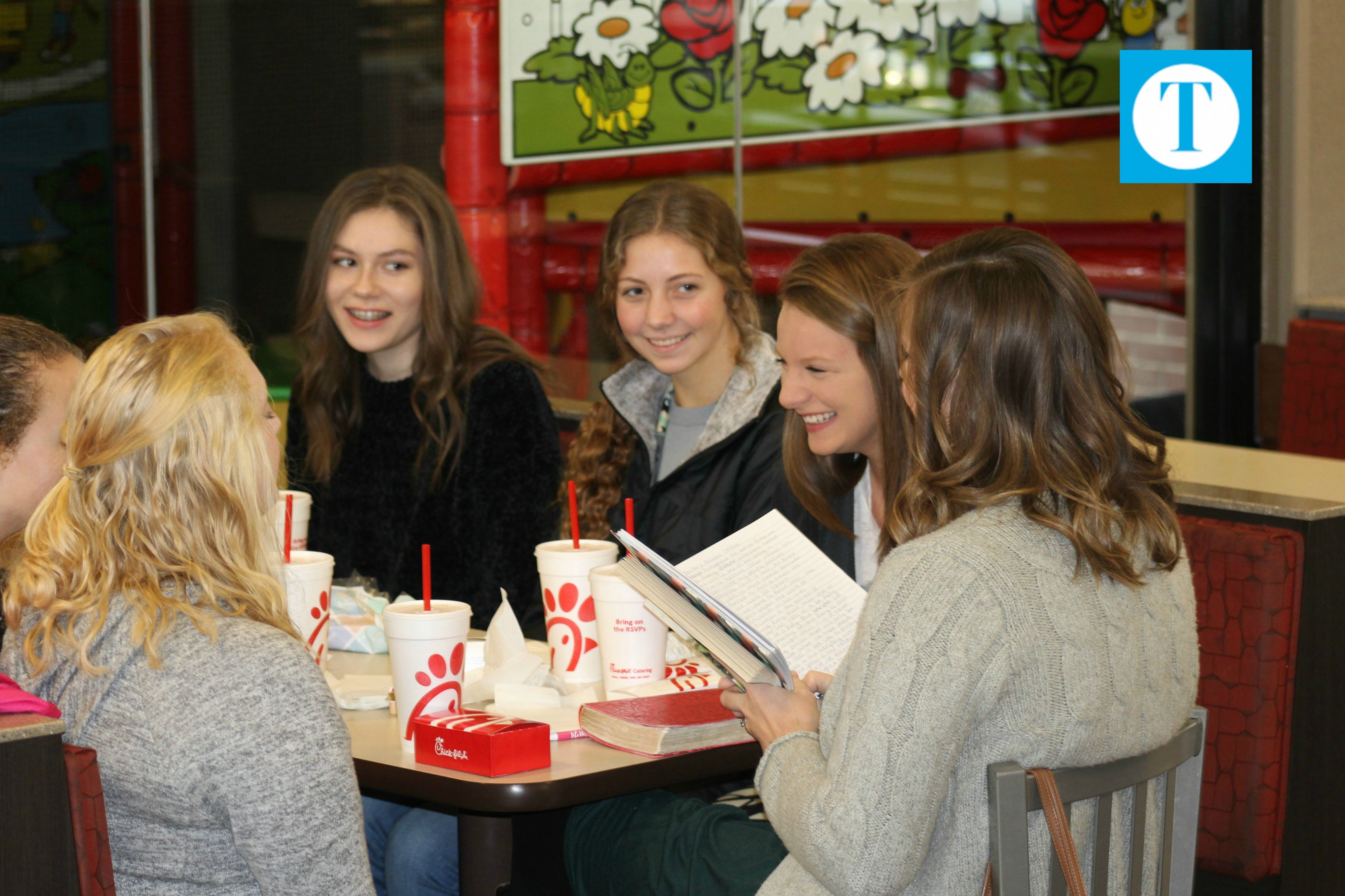 If you were to walk into the Chick-Fil-A on Frederica Street any morning during the week, before school starts, you would probably encounter several high-schoolers stopping in for breakfast. If you were to go on a Wednesday or Thursday morning, you would find a group of Apollo High School girls or boys focused on more than Chick-n-Minis.

Bruce and Victoria Hughes moved to Owensboro in March 2016 to take over the youth ministry at Pleasant Grove Baptist Church. The youth pastor that preceded them held a boys’ Bible study on Thursday mornings at Chick-Fil-A. As the incoming youth pastor, Bruce’s intention was to keep the boys’ group going.

Briley Carter, who is now a senior at AHS, voiced a desire to the leaders to start a girls’ group, and she soon got her wish. The following August, when school was back in session, boys and girls were invited to attend the morning devotional time.

“We originally opened it up to the girls and it got to be too large of a group,” Bruce said. “So now my wife meets with the girls and I meet with the boys.”

The students order breakfast and then sit down and engage as a group. The content can range from devotionals, to spiritual books to guide them through age-related challenges, to selected scripture. While Bruce and Victoria are both there for guidance, sometimes they lead the time, and other times the students take on that leadership role.

“When we meet, we try to carry one another’s burdens; the boys pray and talk about what’s going on in their lives,” Bruce said. “We pray with them when something’s not quite going their way, and rejoice with them when good things happen.”

Bruce and Victoria both said they have noticed that the struggles and temptations for students are occurring younger and younger, and that some of those negative influences are right “at their fingertips.” Bruce added that they are “really starting to see kids starting to struggle with mental health” more and more.

“They don’t have any kind of ‘off time.’ Their minds are so connected to social media because they pretty much have a computer that stays with them and doesn’t turn off,” Bruce said, adding that “others struggle in the content they can find on the internet.”

For this reason, it is really important to Bruce and Victoria, and now the students as well, to have that downtime without electronics when they are meeting.
“It’s crazy how quickly their world has been impacted in such a short amount of time on their phone,” Bruce said. “It’s become increasingly difficult for them to have a conversation, it’s not a skill they have. We work on being intentional with conversations and how to make their conversations go deeper.”

Bruce said they have noticed some positives in the students staying connected with their cell phones by texting and reaching out to one another, and holding each other accountable for weekly meetings.

While Bruce and Victoria joke that they have learned in student ministry that the quickest way to students’ hearts is through food, they also “believe that ultimately we don’t have a platform in their life until they know we care.”

The two also said that the students often comment that these devotional times are a needed “pick-me-up” and the “highlight of their week.”

“It’s pretty humbling to see God work in their lives using the 40 minutes we get to meet and hang out together,” Bruce said.

“It’s just really cool to see them take their faith into the schools where it is definitely needed,” Victoria added.