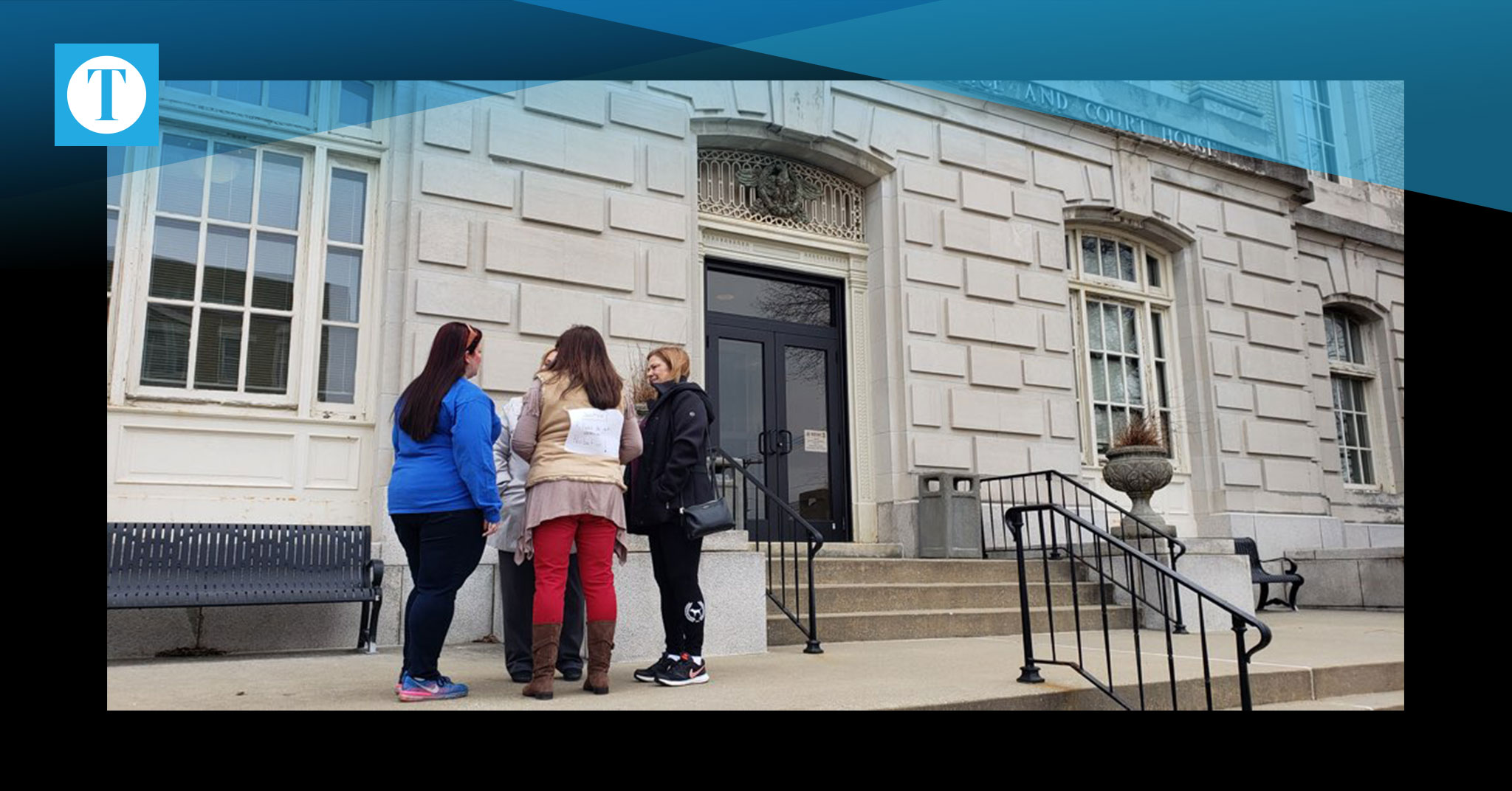 Former employees of Dr. Randall King gathered outside the federal courthouse Monday after Karla King was sentenced to three years probation for wire fraud. One wore a sign taped to her back that read, "Justice? Killers do not deserve probation!"| Photo by Owensboro Times

After pleading guilty to wire fraud in early November, Karla King was sentenced to three years probation in federal court Monday and ordered to pay a $2,000 fine.

According to a sentencing memorandum filed by Assistant U.S. Attorney Madison Sewell on Jan. 18, King illegally ordered and stockpiled testosterone through her Owensboro practice Balance Life Medicine beginning in 2013.

During Monday’s sentencing, District Judge Joseph McKinley said King’s wire fraud was “an unusual case” because no restitution was sought. Sewell agreed, stating that Solutions Pharmacy, where King ordered testosterone, did not ask for restitution and that King did pay for all the prescriptions she ordered.

Sewell said that King’s fraud was threefold. She had an unfair advantage over competitors, who were not stockpiling testosterone. Solutions Pharmacy was unaware of who was receiving the prescriptions they were filling for King. And inaccurate record keeping at Balance Life Medicine posed a risk to patients.

“If this had gone on longer those three risks could have been greater,” Sewell argued to McKinley.

King’s attorney, John Caudill, argued that there was no financial loss, “real or imagined,” in this case.

“This investigation has gone on for five years now, so long that the statute of limitations almost became a problem,” Caudill said.

McKinley found that no loss occurred in King’s case and reduced her offense level from eleven to seven, which removed the possibility of home detention from her sentence. McKinley granted the US Attorney’s recommendation of probation, but reduced it from the suggestion of five years to three and ordered that King pay $2,000 in fines as well as $100 in court costs.

The conditions of her probation included mental health counseling, but they would not be imposed if King paid her fines Monday, which Caudill said she planned to do.

“I am pleased with McKinley’s decision to grant Ms. King probation,” Caudill said. “This has been going on for years now. Ms. King can now get on with her life and continue to care for patients, which is what she loves to do.”

According to the Kentucky Board of Nursing, King’s nursing licensure expired in Kentucky, but she remains licensed in Georgia and Tennessee, where she now resides.

“Her nursing license isn’t impacted on this,” Caudill said in an earlier interview with Owensboro Times. “There is no contention by the government that anyone was harmed.”

King has settled a civil suit with Deloris Pate whose husband died after receiving testosterone therapy and currently has a pending case with Deborah Blandford whose husband also died after testosterone therapy. In Blandford’s civil case against King, a medical review panel, which is a requirement in all malpractice cases in Kentucky, found that King “failed to comply with the appropriate standard of care.” The panel concluded that this was a substantial factor in “producing a negative outcome for the patient.”

Denise Draeger was one of those “patients.” Draeger, who was present at King’s sentencing, was an ultrasound technician for almost 20 years under the late Dr. Randall King, Karla King’s husband. Draeger said Karla King ordered testosterone in her name while she was on vacation. Draeger said she never used or intended to use testosterone and Karla King did not ask permission to order the prescription in her name. But Draeger said the fraud went further.

“The prescriptions were fraudulent. She forged the doctor’s signature,” Draeger said of King, who she contends stamped Dr. King’s signature. According to Draeger, a nurse practitioner cannot prescribe testosterone pellets, which is what King used in her patients’ hormone therapy.

One of those patients, Wendi Humphrey, was also in court Monday to witness King’s sentencing.

Dr. King, Humphrey’s OB-GYN, sent her to see his wife for testosterone therapy after a hysterectomy left her hormone levels in the single digits. Humphrey received four testosterone pellet injections between 2013 and 2014. But when Humphrey began experiencing complications after the testosterone pellets were implanted in her arm, she said Karla King wouldn’t return her phone calls.

“They tested my testosterone levels. At peak time I should have been at 400. When they tested me several months after my peak time, I was at 600,” Humphrey said, referring to the nanograms per deciliter testosterone measurement.

It was this perceived malpractice that led Humphrey to follow King’s wire fraud case and attend her sentencing hearing Monday. She joined a large group of Dr. King’s former employees, like Draeger, who said Karla King’s sentence wasn’t enough.

“She deserved far worse than what she got,” Humphrey said.