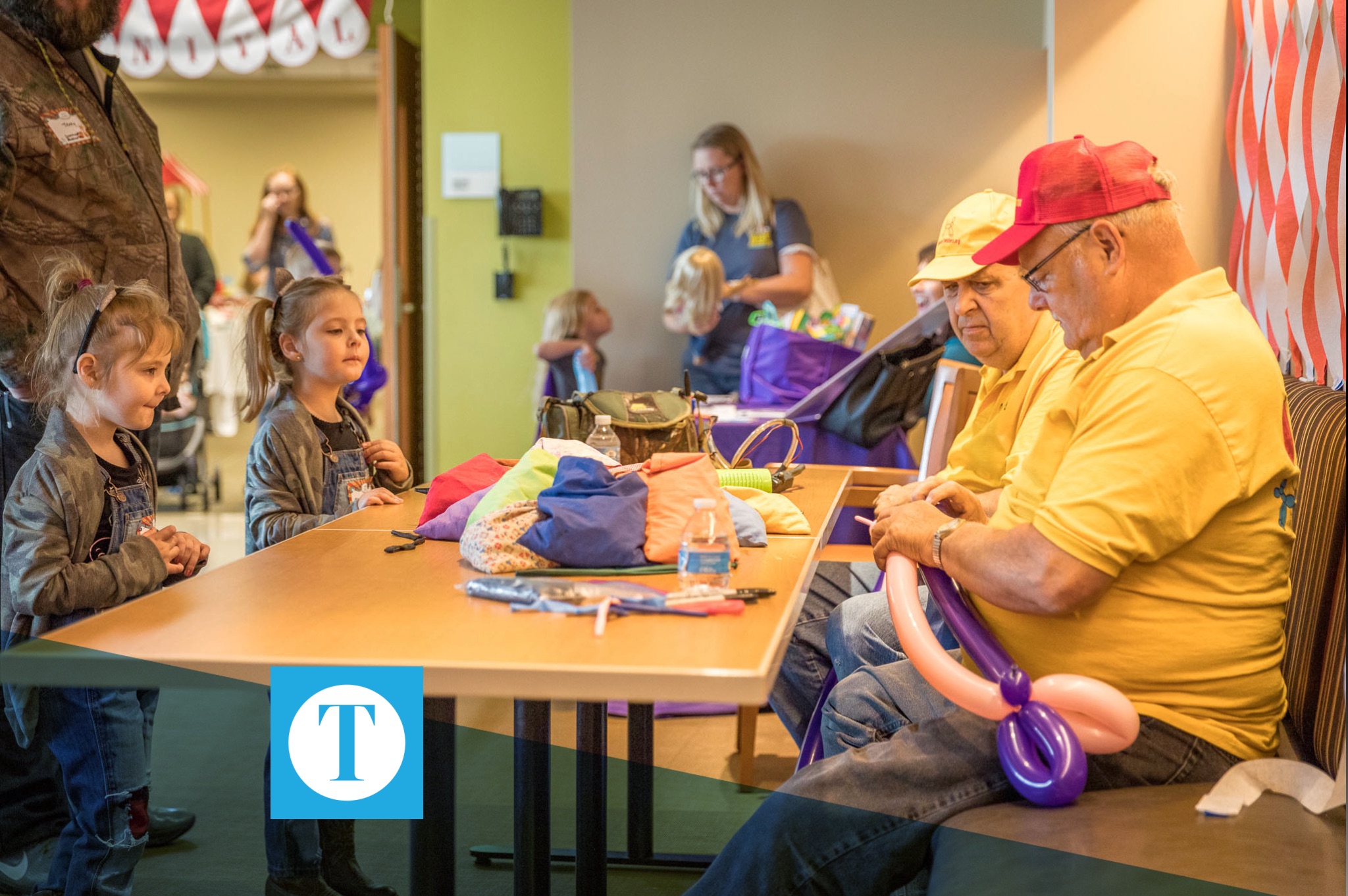 Owensboro Twisters working their balloon magic to the delight of children. | Photo by AP Imagery

They’re easy to spot at local events, with their uniform of yellow shirts and hats and hordes of children clamoring for their own balloon animal or sword.

“The dog, flower and sword are the most requested balloons,” said Richard Thomson, Owensboro Twisters organizer. “The kids love to get swords and fight with them. We can make animals that even use five to six balloons each.”

The late Tom Gaston started the Twisters as one of his random acts of kindness that he wanted to do as often as possible. When he retired from Purdue, Mr. Gaston taught himself magic and how to make balloon animals in his newly-found free time.

After volunteering to twist at the Goodfellow’s Christmas party in 2007 by himself, he was overwhelmed by the number of kids that wanted balloons and knew he needed to recruit some help. Magic fell into place when friends came to his aid.

Thomson took over the twisting group about six years ago, and he’s only been surprised by one balloon request.

“I had a kid ask me once if I could make an Abraham Lincoln. I guess he was a history buff,” Thomson said. “I asked if he wanted a sword instead.”

Each Twister works on a volunteer basis, trading in their free time to make an impact in Owensboro.

While volunteer-based, the Twisters accept donations and all those are given to the Boulware Mission. $80,000 has been donated to the shelter in the last six years alone, generated from 564 gigs.

“It’s for a good cause, to help the homeless,” Thomson said. “We enjoy getting together and twisting. And it’s something to see a young kid smile after getting a ten cent balloon instead of a $50 video game.”

Their crowd appeal and talents have resulted in standing gigs at Friday After 5, 4th of July at Smothers Park and Celebrate the Kid in Hancock County. The Twisters have eight volunteers that they keep on rotation for events, but are always looking for more big-hearted volunteers with a willingness to learn the craft.

“Don’t be scared to learn how to twist. It’s for a great cause,” Thompson said. “We can teach you how to twist three items in just 15 minutes, and most of the more complex balloons stem from those three basic balloons.”

To book the Owensboro Twisters for your next event or to become a Twister, visit their Facebook page or call Mr. Thomson directly at 270-685-5371.