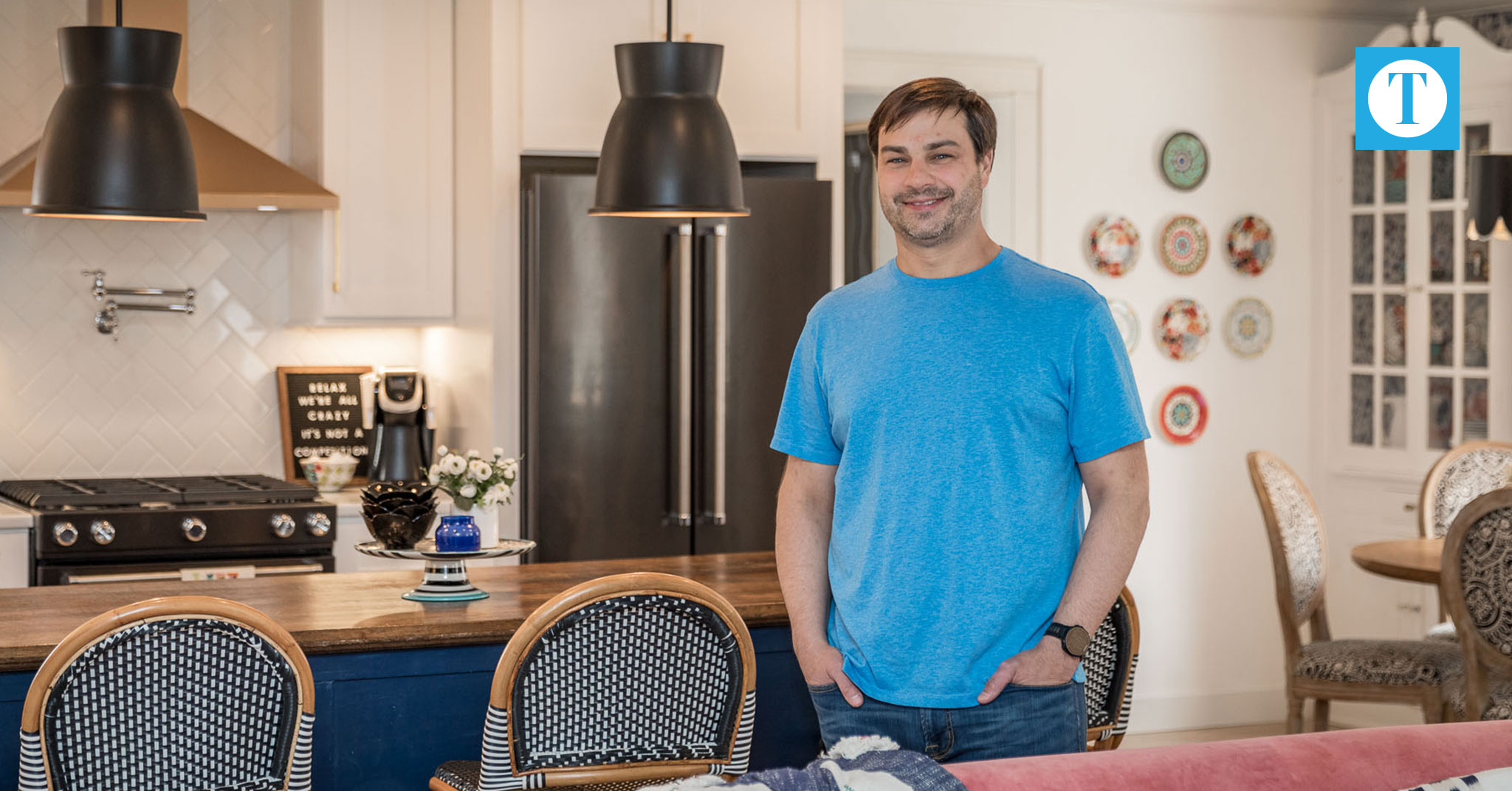 From the flooring to the moving of the corner cabinets, Thomas has researched how to do the project and then completed it. | Photo by AP Imagery

Buying a new home is an endeavor and usually a labor of love, whether it is your first or your fifth home. But for the Thomas family, who purchased a home built in 1935 on McCreary Avenue last year, keeping the integrity of the original design was one of the most fascinating points for Trent Thomas.

One year and a few months later, Thomas said he is ready to be finished with the remodeling, but he sees more to do before he is perfectly finished.

“Until this house, we have always lived in a new home,” Thomas said. “I learned through those processes that anything out-of-the-ordinary or unique that I wanted to do was either expensive or no one could do it or wanted to do it.  So, I have done a wide range of home projects, small and big, over the years – collecting experience along the way.”

Thomas works full-time out of his home for Oracle, one of the leading suppliers of software for information management, database products and cloud products and services. This allows him more flexibility between work and remodeling.

While most kids watched cartoons or action movies growing up, Thomas said he watched “This Old House,” the original do-it-yourself television show that first aired in 1979. From the flooring to the moving of the corner cabinets, Thomas has researched how to do each project and then completed it.

“I’m a computer engineer by trade and, as such, have always been interested in solving problems,” Thomas said. “Along the way, we’d have a project we wanted to do and in this, I’d see it as a problem that needed to be solved. A little research combined with previous experience, and some trial-and-error is usually all it takes. The biggest things I’ve learned along the way is that every situation is usually different in some way and that there is probably more than one right way to do something.”

The Thomases have worked closely with interior decorator and designer Amy Strode, who has created many of the designs that both Trent and Heather, his wife, thought were quirky and, in the end, were exactly what they wanted.

“It all started with a great design, which is at least half the work,” Thomas said. “Amy Strode, who is a design genius, put the plan together for everything we have done. All I had to do was execute the plan. From there, though, I have done a little bit of everything. I have removed interior walls, framed new walls, built mantels, laid tile and hardwood floors, built and installed cabinets, installed and replaced doors, installed exterior siding, refinished stairs, installed a huge amount of trim, installed light fixtures, painted and many other things.”

It hasn’t all been easy, Thomas said, because of the house’s unique features and years of settling the levels can be off and what the measurement is on the left side is not what it is on the right.

Thomas did have to call in help to remove a load-bearing wall, and he had the kitchen wall tiled by a professional because it was cheaper than renting the equipment he would have needed, but beyond that, Thomas has been working to renovate the three-story home himself.

“A lot of the work we wanted to do would have been prohibitively expensive to have someone else do,” Thomas said. “I like looking around the house knowing that I did this or that with my own two hands.”

As he was moving the corner cabinets and removing the layers of wallpaper, Thomas found a newspaper rolled around other papers. Originally he thought he had maybe found money, but, he said that what he found was much more valuable — the original blueprints of the house.

Strode turned these blueprints into a focal point when entering through the front door and the blue of the framed prints matches the accent colors throughout the main level.

Thomas has also made his home a smart home. Working with Apple-compatible products and an Apple HomePod, family members can turn on the fire, adjust the temperature of the house and even close the outside gate with a voice command, along with several other commands.

While Thomas has been remodeling his home, friends have taken notice of the craftsmanship, as well as the technological additions. These friends began asking Thomas for suggestions about their own homes which led Thomas to make a visit and fix the necessary concerns.

At one of these handyman visits, the owner wanted to pay Thomas, something he had not even considered, but then he began thinking about how the art of handyman was a dying profession with professionals becoming more specialized. The more he thought, the more he realized he had a side profession few could rival. And out of this, Thomas Handyman Services was born.

“I have helped my friends out with various projects over the years, and in doing that, realized there was a huge need for someone willing to come out for an hour, or even a half hour, to do small projects around the house,” Thomas said. “Most professionals are interested in larger jobs because that’s how they make their livelihood – and most don’t want to deal with small stuff like hanging a TV or fixing an out-of-square door frame.  I have a pretty wide range of skills, and really enjoy doing the work.”

Using the skills Thomas has perfected while remodeling his house, including the added benefits of knowing how to install televisions and other technologies, Thomas is helping homeowners hide the wires and use voice-command technologies.

Thomas charges $60 per hour and keeps an updated schedule on Facebook, where there is a booking tool as his availability varies from day to day.

“I see this side job as something that fills a need in our community and allows me to help my neighbors and friends — and it is also something completely different from what I do as a career,” Thomas said. “I really enjoy the change of pace it brings.”

To find out more about Thomas Handyman Services or to schedule an appointment, visit his Facebook page.