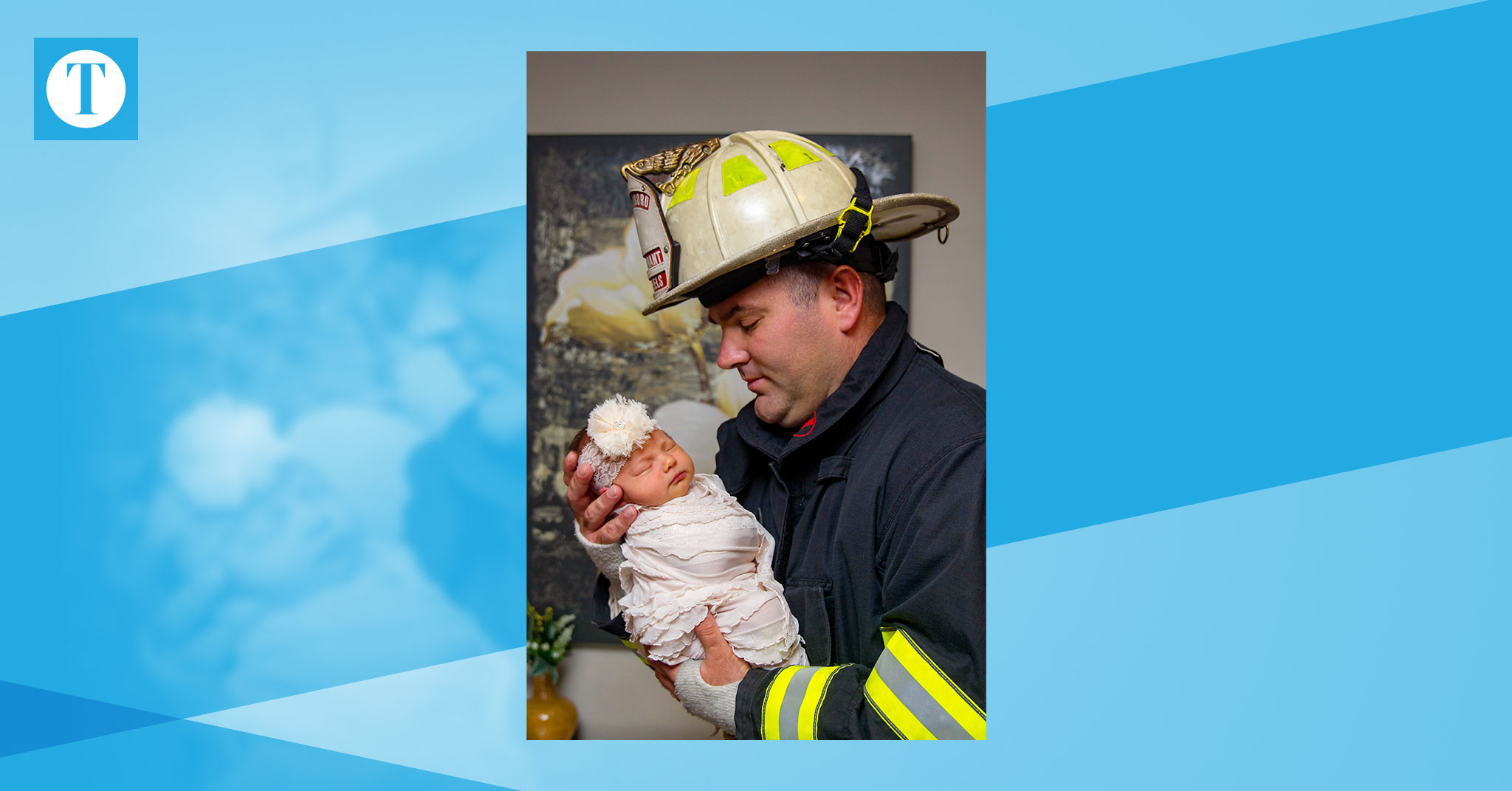 OFD Lt. Larry Freels with his daughter Magdalene, whom he delivered in the front seat of the family's Honda Odyssey. | Photo courtesy of Captured by Cami

As a child’s first birthday approaches, a mother’s mind naturally goes back to the day their baby arrived. They remember the weather, what they ate and where they were leading up to the big event. For local mother, Stacey Freels and her husband Larry, the upcoming first birthday of their youngest child, Magdalene, is the anniversary of a dramatic entrance they could never have anticipated.

On June 22, 2018, Magdalene Marie was born en route to Owensboro Health Regional Hospital. Her father, Lt. Larry Freels of the Owensboro Fire Department, delivered her in the front seat of the family’s Honda Odyssey.

“I couldn’t believe that in the span of about 45 minutes, I went from realizing it was true labor to actually giving birth,” Stacey Freels recalls, saying that the entire event was like “something out of a movie.”

Freels’ previous deliveries had taken over ten hours each, she said, so there was no reason to indicate that her fourth child would make her appearance so quickly. The baby, whose gender was not known before birth, was due on June 21, but that date came and went with no hints as to when labor might commence.

“June 22 started out like all the other days,” Stacey wrote in a detailed story following the birth.

She and her husband took Caleb, 8, and Ella Grace, 7, to Vacation Bible School and took Lucas, 3, out to breakfast at Huddle House. A pleasant but uneventful day passed. About 4:30 p.m, she texted her mom and said her contractions were about eight minutes apart and that she thought “this was the real deal.”

Stacy had planned and prayed for a natural childbirth this go-round, but she had no idea at the time what that would entail.

After bathing the children and getting them packed to stay with their grandmother, the couple headed off to deliver them to Larry’s mother’s house — calling first to let her know that they would “be coming in on two wheels,” as Stacey’s labor was rapidly progressing.

The couple managed to get their children dropped off at their grandmother’s, and Stacey remembers being too focused on managing her pain to even wave at them.

“I yelled out, ‘Jesus and Mary, help me!’” Stacey said. “I was beginning to realize that we were not going to make it to the hospital.”

Stacey said she then yelled at Larry to pull over, and he quickly did. When Larry reached Stacey’s side of the car and saw that the baby was on its way, he ran back to see if there were any nurses or doctors in any of the cars behind them.

While Larry did not find any medical assistance in the accompanying vehicles, that didn’t stop little Magdalene from making her debut at 5:22 p.m. She emerged with hardly a push, according to her mother.

“Larry grabbed her and laid her on my chest,” Stacey said. “I remember thinking that she was a little purplish, but I just rubbed her and patted her back, and then we heard a sweet cry!”

Mere minutes afterward, Stacey heard the sounds of Engine 2 approaching. Firefighters Rob Harris, Brian Rowan, Matt Cissell, and Ted Johnson — all of whom Larry had worked with at one point or another during his time in the fire department — rolled up. The firefighters loaded Stacey and Magdalene up in the ambulance and drove to the hospital.

Though his brothers from the OFD were in full responder mode, Larry said he felt he moved between the roles of father and first responder throughout the short but exciting ordeal.

“When I thought we were still going to make it to the hospital, I was still in dad mode. But when we pulled over and I saw what was happening, I automatically switched to responder mode, calling 911 and thinking about what had to be done,” Larry said.

In the mere thirty seconds that elapsed between him catching Magdalene and placing her on his wife’s chest, Larry said he again switched modes without thinking. Even though his wife was “definitely not just another patient” as he delivered the baby, once it was over he was in awe of Stacey and the new daughter they marveled over together.

“Something so huge was so simple, and where so much could wrong, it went perfect — but it was definitely not easy,” he said.

At the hospital, both mother and baby checked out fine, and Magdalene weighed in at 8 pounds 7 ounces. Stacey said they were referred to as “the van people” for the duration of their two-night stay in the hospital.

Despite her exciting and unconventional entrance, Stacey Freels said little Magdalene has been the “sweetest addition to our family” who loves to be held and snuggled.

“She certainly makes her presence known,” her mother said, adding that, when Magdalene is old enough they do plan to tell her about her “crazy birth.”

“The kids certainly love telling it,” Stacey said. “In fact, when they started back to school after summer break, that was what they told their classes about ‘what I did on summer vacation.’“

With distance from the event and a nearly year-old healthy daughter added to their clan, Larry said, “We can have comedy now,” but he added that if the couple has another child, “As soon as she [Stacey] feels anything, we’re leaving!”