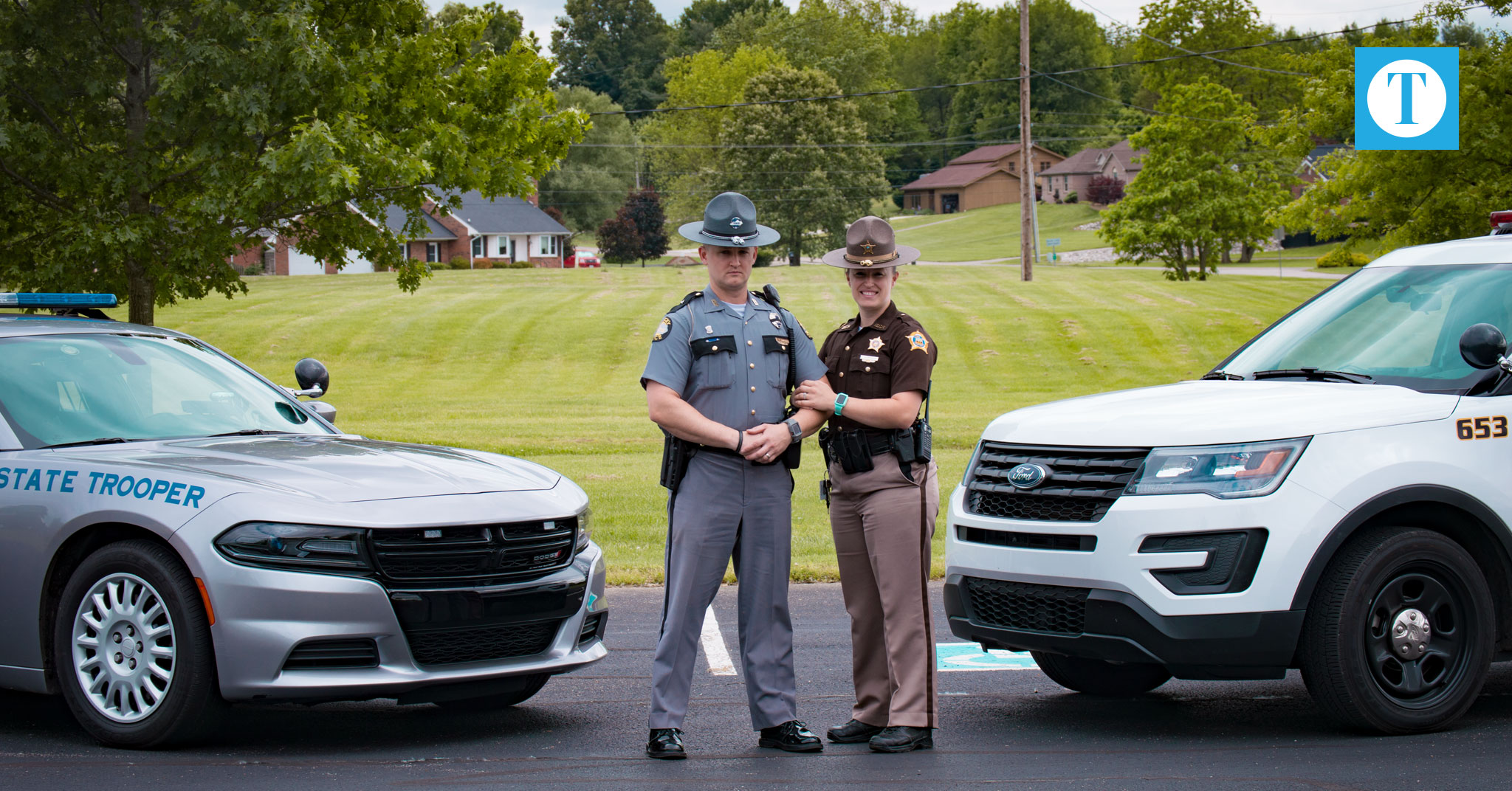 Some couples meet in high school or on a blind date, but one local love story has a very different beginning. Lacey and Shaun Schroader met in jail. Lacey, who worked for the Daviess County Detention Center, would see her future husband Shaun, who at the time worked for the Owensboro Police Department, when he brought people in after an arrest.

“When we tell people we met in jail some people don’t know how to take that,” Lacey said.

Part of the attraction for this couple came from the shared desire to sacrifice and protect others. Lacey, a Daviess County High School Graduate, went to Kentucky Wesleyan College before joining the Army Reserve where she has served for the past ten years. Shaun, an Ohio County High School graduate, completed his undergraduate work at Western Kentucky University where he obtained a degree in exercise science.

After working at the detention center, Lacey would go on to become a deputy with the Daviess County Sheriff’s department where she has served for the past three years. Her husband Shaun served with the Owensboro Police Department for four years and has been with the Kentucky State Police for two years. Between the two of them, they share more than a dozen years experience in law enforcement.

The couple has three children ages 11, seven and one. The biggest challenge of leading a household with two active police officers, is never knowing what to expect. According to Lacey, this can be both a blessing and a curse.

“It’s good for the relationship because I know what he goes through and he knows what I go through,” Lacey said. “At the same time, that’s the hard part; we both know what the other is going through.”

People often ask them, “What’s the coolest thing you’ve ever done?” Perhaps they are looking for a high-action story or a recount of events from an intense day on the job. Lacey’s answer is more simple than that.

“Interacting with the kids at my daughter’s school or being a part of community events would stand out to me,” Lacey said.

Working with the schools and special events brings the chance to serve in a different capacity. Lacey recalls taking the Hummer out to a rookie baseball game in Whitesville. Each year, local law enforcement has several opportunities to show the community that there is much more to the job than meets the eye.

On Police Awareness Day, the Owensboro Police Department hosts a 5K race “Run from the Cops,” that is followed by several local businesses and organizations setting up informational booths around the parking lot of the department. Kids are given the opportunity to ride on a bike course, climb aboard an ambulance, and watch the K-9 demonstration. The event is completely free to those who attend and includes prizes, giveaways, a free lunch and information on community programs.

This is just one example of the many forms of outreach that local law enforcement supports each year. Others include Shop with a Cop, The Real Men Wear Pink campaign, Owensboro’s Lip Sync Battle and the Owensboro Dance Theatre’s Dance Battle Extravaganza, events that raise funds for areas of need in the community. Giving back while off duty is second nature to most officers.

Being an active leader in the community provides this couple a chance to share a common vision and impact others in a positive way. Shaun works Post 16 which includes Daviess County and Hancock County. He has also covered Ohio County and McLean County.

For Shaun, law enforcement goes beyond the borders of a county line, however. Perhaps the greatest part of this career field is being able to step into situations whenever he is needed.

“I wanted to work with the public and do something that made a difference,” Shaun said. “I wanted to help people.”

A new understanding of the demands of the job will come about in August. Lacey plans to start the Kentucky State Police Academy LEAP, or Law Enforcement Advancement Program, which lasts 12 weeks and takes place in Frankfort. By the end of this year, both Shaun and Lacey will work for the Kentucky State Police, bringing their connection to each other’s challenges and struggles even closer.

“Each day is different,” Lacey said. “You never know what will happen.”