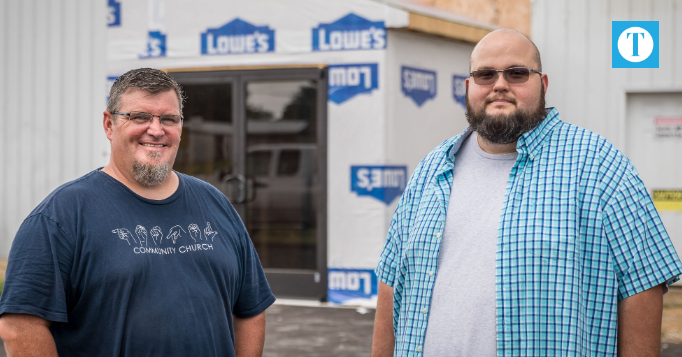 Gospel Community Church leaders Danny Hinton and Joshua Huffman said the church is close to opening its doors at its own location. But it has taken four years and a lot of answered prayers to finally be at that place. | Photo by AP Imagery

Gospel Community Church, a church that seeks to reach everyone in Owensboro, is close to opening its doors at its own location. But it has taken four years and a lot of answered prayers to finally be at that place.

“God had a plan. I really didn’t sit down and have this brainchild of planting this church. It just happened out of necessity,” said Danny Hinton, Gospel Community Church’s Pastor of Preaching and Vision.

Hinton said that the deaf community is the fourth largest most unreached people-group in the United States, especially in the church. Gospel Community Church (GCC) wants to change that.

“There are 7.5 million culturally deaf people in the United States. And with those numbers, there are only between 39-45 churches in the country that were planted to reach that community, and those churches are usually incredibly small,” Hinton said.

Hinton says his path to ministry, especially ministry catering to the deaf community, was not a straight and defined road. He started learning American Sign Language when his parents were considering adopting a deaf child.

“I began to learn sign language really early from a neighbor at 3 or 4 [years old] and never expected to become an interpreter,” he said. “The first interpreter job I had was when I was 13. I got called to interpret for a baby delivery at a hospital.”

GCC doesn’t just accommodate for the deaf community, but they wanted to encompass everyone whether that means someone is deaf, blind or has mobility or mental disabilities.

“When we launched, we wanted the church to not just accommodate to deaf people, but be fully inclusive. The mission was to reach deaf people and make sure they had access to the gospel, but we were willing to try things to find out what worked best. Full inclusion was our goal,” Hinton said.

After jumping from one space to an even bigger one thanks to some local churches, GCC took a leap of faith and purchased a building on Ninth Street in downtown Owensboro.
“We started in a Sunday school classroom at Pleasant Valley Community Church with the understanding that we would probably never be more than a dozen people,” Hinton said.

“When we went to look at the building on Ninth Street, we just prayed. We didn’t have the money in the bank to do this. We didn’t even have chairs to put in the building. We got a phone call about an hour later and chairs were donated. Within five weeks, we received enough money to buy the building outright.”

And the ball kept rolling from there. After struggling to get a bank loan, Independence Bank agreed. Local contractors called to donate labor and materials. Things were looking good until a weather disaster resulted in a major setback.

“There was a flood of people that wanted to help us. We took the mortgage out and then in November 2017, the roof caved in from snow. Olga McKissic from the Neblett Center called and knew we needed a place until our roof could be fixed. She invited us to use the Center and keep engaging with people in our neighborhood,” Hinton said. “I didn’t know what to do other than pray. We met at the building at 4 o’clock every day to pray and we did that for about three or four months. Nothing happened and I wanted to quit so badly.”

The perseverance paid off. Grant opportunities started coming Hinton’s way. Scott Yates at Preferred Roofing called and discounted the roof work and donated labor to get GCC back in business.

“People came out of the blue. We got calls from local churches and churches outside of our area that packed up vans and did whatever work we could give them,” Hinton said.

GCC is truly blazing the trail with the planting of this church, but Hinton said that Owensboro is a special community and that’s why it works.

“With Puzzle Pieces, Wendell Foster and the work that the school systems are doing, I think we’re laying a foundation for full inclusion that you don’t see in many cities,” Hinton said.

Hinton invites anyone and everyone to attend their weekly service Sundays at 10 a.m. at the H.L. Neblett Center…for now.

“We anticipate being moved into the new building by the end of September or October,” Hinton said.

More information about programs and services can be found at their website.