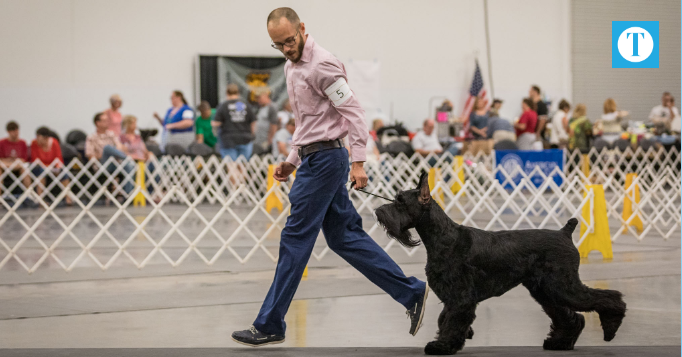 The River Valley Cluster Dog Show will take place at the Owensboro Convention Center from August 22 through August 25. | Photo by AP Imagery

Some may have noticed trailers and an unusual amount of dogs rolling into downtown Owensboro, marking the start of the annual River Valley Cluster Dog Show. This year’s show will take place at the Owensboro Convention Center from August 22 through August 25.

“We have exhibitors coming from New York, California, from all over the United States,” said Cindi Bosley, show chair for the River City Kennel Club. “The actual entries are kept under lock and key until the show starts. We’ve very certain that we’re going to have some top-ranked dogs here that you may have even seen on television during the Westminster Dog Show.”

The annual show is hosted by the Owensboro River City and Southern Indiana Kennel Clubs which are affiliates of the American Kennel Club (AKC). The clubs combined to form the “river valley cluster.”

“We’ve been hosting the dog show at the Convention Center since 2015, but the show started in 1993,” Bosley said. “We partnered with the Southern Indiana Kennel Club to make it a four-day show. The four-day show gives us four best of show winners and allows exhibitors to show for four days.”

This AKC all breed dog show will feature obedience and rally trials.

“We have the best of breed competition with each best of breed winner going into the group competition and a group winner selected will go on to the best in show competition,” Bosley said. “In the rings, you’ll see the dogs be exhibited and judged. It’s very interactive. Definitely a family-oriented event.”

Watching the show is only half the fun as spectators can roam around and watch the primping and preparation the dogs and exhibitors must do prior to entering the ring.

“This show is for anyone and everyone,” she said. “The spectators can expect to watch the dogs be conditioned, groomed and prepared for the show ring. We have bathing stations behind the Convention Center where you can watch them bathe and they’ll return to their grooming area to be dried.”

While you can’t bring your family pet to the show, you can certainly bring them a souvenir.

“We will have vendors on-site that will have doggy supplies, clothing, jewelry. Just a lot of dog supplies that is great for the general public to come shop and learn about the different breeds and products,” Bosley said.

The four-day event draws a crowd from regional spectators, but those competing make an impact on the Owensboro economy for the weekend.

“We saw a nice increase in entries this year,” Bosley said. “We have filled multiple hotels in town with so many exhibitors coming in for the show. I don’t have a firm figure for the economic impact, but the visiting exhibitors usually eat in our restaurants and go shopping while they’re here.”

If children attend, Bosley has a unique suggestion to keep them and the exhibitors safe.

“We recommend that families coming to watch do not bring baby strollers. The strollers usually hit at the dog’s face level and we want to prevent having any safety issues or stress on the dogs,” Bosley said.

Events kick off Thursday at 8 a.m. at the Owensboro Convention Center. Tickets are $5 for adults, $3 for seniors and free for children 12 and under. Spectators can find the judging program at www.orckc.com.