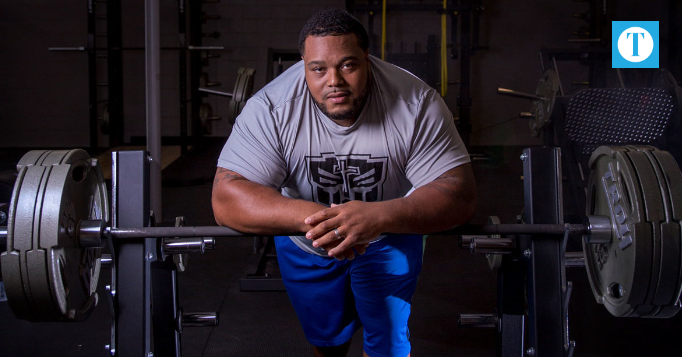 On the last day of August, in Mountain View, Calif., five men spotted a bar holding 739.6 pounds and one man raised it back up to claim the raw bench press world record in powerlifting while hundreds cheered him on.

For the past seven years, Julius Maddox has been lifting weights as a means of relieving stress and refocusing his life in a positive direction. Early on, Maddox set the extraordinary goal of trying to break the world raw bench press record. Saturday was Maddox’s second attempt to break the world record of 738.5 pounds previously set by Russian powerlifter Kirill Sarychev in 2015. In June, Maddox set a new American record by benching 723.1 pounds in Corpus Christi, Texas.

“We weren’t expecting a world record this early — we were hoping maybe by December,” Maddox said. “But no one expected this to happen. Some people thought it would not be broken within 20 years, but I came in and changed the direction and changed everybody’s opinion. It’s crazy — I’m blown away.”

For those watching the lift, whether in person or through video, the instability of the bar’s initial return to the rack caused some concern. But Maddox confirmed that the record was indeed official and he was unharmed.

After a whirlwind of a day on Saturday, Maddox said the reality of being a world record holder has yet to sink in.

“It’s been nonstop after the lift,” Maddox said. “I haven’t even gotten a chance to sit down and take it in and enjoy the moment.”

With his newfound title, Maddox said several opportunities have already presented themselves, from a paid 800-pound lifting challenge to the idea of Maddox and the former world record holder going head to head, something that has never been done before.

As for the future, Maddox is set to compete in meets in January and April, but is uncertain if he will continue powerlifting beyond 2020.

“I want to go on a weight loss transformation and lose about 100 pounds once I’ve wrapped up lifting,” Maddox said. “To be realistic, it’s not healthy to sit at this weight. I’ve achieved what I came for, so I’m going to pray about it and see where the Lord sends me.”

Beyond lifting, Maddox hopes to share his journey with others in hopes that it might serve as a source of encouragement.

“Ultimately, I want to inspire people — I want to be a motivational speaker,” Maddox said. “I just want to inspire the underdogs, those guys that society has counted out and viewed as a lost cause and let them know there’s a way to make it out.”

Maddox said he found his own inspiration with the organization Friends of Sinners, where he now works.

According to Nick Martin, Maddox’s best friend and co-worker at Friends of Sinners, during their 25 years of friendship, Martin has witnessed many of the ups and downs Maddox experienced while transforming his life.

“I’ve seen him go through drug addiction and trouble with the law — to changing his life, serving the Lord and being an active member of his church and a positive member of society,” Martin said. “So I’ve seen his life go full circle from bad to good.”

Martin was visiting a friend at the hospital Saturday and was not able to attend the competition. He said he watched as Maddox broke the world record through a live stream on his cell phone.

“I’m proud of him,” Martin said. “I think it’s a huge accomplishment — not only for him but for Owensboro.”

According to Maddox, his Owensboro friends and family and supportive sponsors helped give him the drive he needed to accomplish his goal far ahead of schedule.

“At the end of the day, God made it to where the people I needed to have were around me — everybody played the role and played it well,” Maddox said. “Without those people in my life I wouldn’t be the world record holder at this moment.”