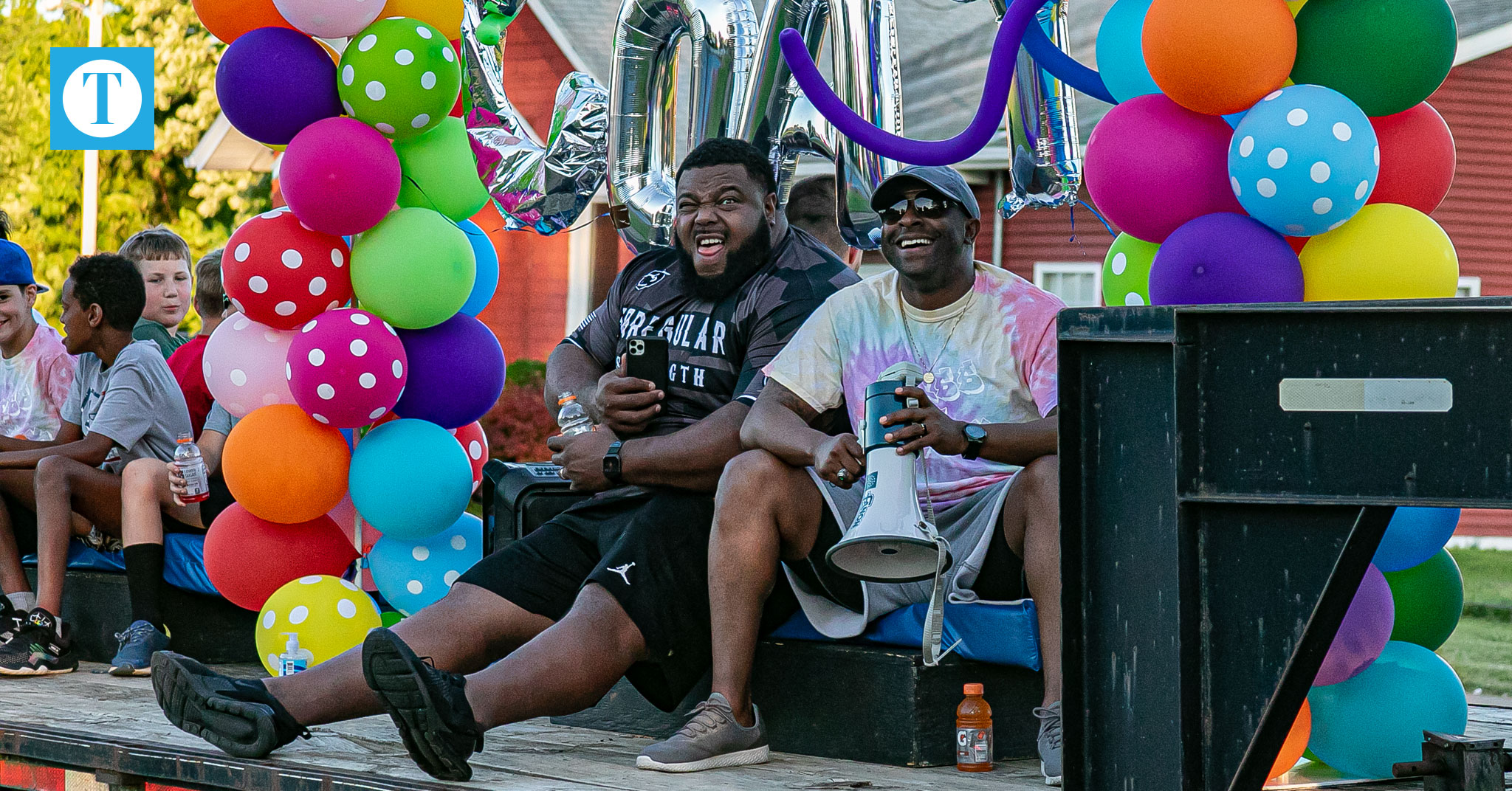 Friday’s “Bless the Block” parade went as well as event organizers could have hoped for, with an estimated 500 residents in the Baptist Town area coming out in one way or another for a fun night in the community.

Children and adults alike flung water balloons from their yards at local heroes Julius Maddox, Chad Morris and Travis Owsley as the trio rode the streets on the “GOAT” float.

Christian rapper E2 of Evansville shot a live music video as children danced near his stage on the flatbed trailer.

Justin Kline, who spearheaded the event, said it was a success considering the night began with a bit of organized chaos since they’ve never done anything like it before.

“I think it went really well,” Kline said. “There was a lot of energy. I’m thankful God provided a beautiful night. It couldn’t have been a better night. There were so many moving parts that came together.”

Typically, Kline holds a Vacation Bible School each summer at his home on the intersection of 5th and Poplar streets. Unable to do that this year, Kline and the community decided on a parade that would weave through the neighborhood and “bless the block.”

Nearly half of the residents stayed in their own yards to help maintain social distance, and the majority of people wore masks.

Kline said what made the night a success was being able to go beyond just reaching the children like at a typical VBS.

“We have adults that come (to VBS) and participate as well and we try to make it an event for all ages as much as we can, but inevitably mostly children come,” he said. “The great thing about bless the block is that we were able to engage with children and adults alike. There were probably as many adults if not more. It was great to see them having fun and dancing as well as throwing water balloons at Julius, Chad and Travis.”

After the parade was over, Maddox addressed the crowd with a message to residents both young and old.

“Know the importance of learning and paying attention in school,” Maddox told children. “Don’t bully. When you see another person being picked on or treated unfairly, I think it’s up to us to be nice to those people — especially when you see someone sitting alone at school, at lunch. That’s very important, stand up for people who can’t stand up for themselves.”

And his message to adults: “Continue to pour into our kid’s lives. Make it a point day in and day out to stand up for the kids. Someone has to do it. As Christians, it’s what we are called to do.”

Kline said he was thankful to have what he dubbed local heroes join in on the fun.

“People know guys like Julius, Chad and Travis — those guys have worked hard. They are all entrepreneurs and role models in the community,” Kline said. “They came out of this neighborhood and people know the hard work they do. People get to see a different side, a fun side of them and an opportunity to hear them speak.”

The Klines also said while they’d like to return to a normal VBS next year, the parade is something they may find a way to do again.

“We are beyond thankful for how it went,” said Rebekah Kline, Justin’s wife. “It served the purpose we wanted it to. We do want to have that one-on-one time with the children, but we would love to bless the block again.”