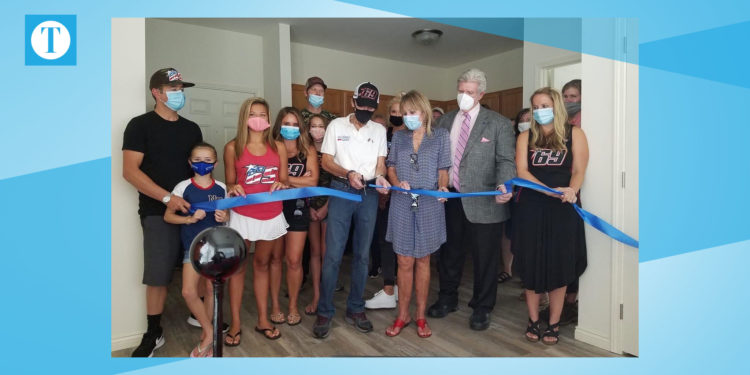 A virtual ribbon cutting ceremony was held Tuesday for the recently completed Nicky Hayden Apartments, which will provide individuals and families a transition from homelessness to permanent housing.

The new apartments, located at 712 W. Fifth St., will serve homeless individuals with incomes that fall 60% or below the area median income.

Each of the 12 apartments contains 640 square feet of space, including a kitchen and full bathroom. Each unit is equipped with a dishwasher and refrigerator, with washer and dryer hookups.

For Jana Pollard, who will soon be moving into the apartment complex as a tenant, the transitional housing opportunity came at a much-needed time in her life.

“During the three years I was homeless, it wasn’t like I wasn’t working. Some people that are homeless — it can be mental. Some have addictions to drugs and alcohol. Mine was a financial setback that was unexpected,” she said. “I’m amazed at the fact that I have the opportunity to have an apartment because I didn’t think I could do it. For a long time I was so depressed, and it was so hard. It’s not just positive for the ones who are in here, but for the community, because everyone needs a chance.”

It took several partnerships to make the project come to fruition. The Daniel Pitino Homeless Shelter teamed up with the Hayden family in coming up with the idea for transitional housing, while the Kentucky Housing Corporation put $900,000 in HOME and AHTF funds toward the project.

The Federal Home Loan Bank of Cincinnati provided $600,000 in funds, while an $800,000 construction loan and more than $22,500 in donations, waived fees and interest payments came from Field and Main Bank. The Daniel Pitino Shelter contributed an additional $69,340 in equity donations.

“This is a project that’s been several years in the making,” said Pitino Shelter Vice Chairman Greg Mullican. “Thanks to the vision of our board and our staff, we’ve got a project that’s a tremendous addition to what our original mission is here at the shelter.”

Owensboro Mayor Tom Watson said there was nothing better than “continuing the Kentucky Kid’s legacy by providing homes for people who need them,” while Wabuck Development president Gary Watkins described the apartment complex as a memorial for Hayden.

“It’ll be a great tribute to his life and for others who can’t help themselves,” he said. “Fr. Bradley and the Daniel Pitino Shelter had worked with us before, and they knew they had a great need to try and transition individuals and families out of the shelter and into permanent housing, and that housing was in short supply. They presented the idea to Tracey [Glasscock] and she came to me. She used her persuasive powers on me.”

Watkins said he hoped the Nicky Hayden Apartments would save many lives to come and that Wabuck Development had been pleased to be a part of it.

Standing alongside the rest of the Hayden family, Nicky’s sister and board member Kathleen commended the Daniel Pitino Shelter for their efforts in supporting the project and the community of Owensboro.

“Through darkness comes light and we are honored to continue Nicky’s legacy by helping those in need, especially through a wonderful organization like the Daniel Pitino Shelter,” she said.