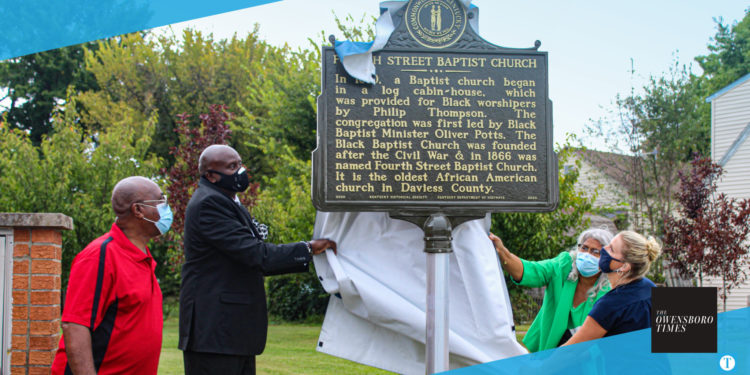 The church — which began in a log cabin-house in 1830 — was originally provided for Black worshipers by Philip Thompson. The congregation was first led by Black Baptist Minister Oliver Potts. The Black Baptist Church was founded after the Civil War, and in 1886 was named Fourth Street Baptist Church.

City Commissioner and mayoral candidate Pam Smith-Wright gathered months of research and numerous letters from City and County leaders supporting the project, then submitted an application in August to the Kentucky Historical Society in Frankfort.

After a lot of back and forth with those in Frankfort, Smith-Wright was able to surprise the congregation at Fourth Street Baptist — where she’s been a longtime member — with news of approval in receiving a Kentucky Historical Marker.

“I do thank Sister Pam Smith-Wright for a job well done in gathering all of the information she did over the last year — getting with the right individuals, the right departments throughout the state of Kentucky,” said the Rev. Mario Pearson.

“I got to thinking, ‘190 years,’ it’s the blink of an eye — 190 years during which this community has seen bad times, and sad times, and good times,” he said. “We have seen marriages and births and deaths. We’ve seen a myriad of things going on around us. But the one constant for our community has been Fourth Street Baptist Church, and those folks who ministered to our community during those bad times, during those sad times, and during those good times. Always with an uplifting message, always encouraging. And I hope someday, 190 years in the future, somebody will stand here and say the same things I did today.”

During the ceremony, Smith-Wright provided a detailed history of the church’s evolution.

“We pray that our whole congregation, our family and our friends know and understand the gospel and that every day, we live as we are taught,” she said.

The Marker, placed to the side of the church’s entrance and in front of a grove of trees, disclosed a brief background pertaining to Fourth Street Baptist’s historical status as the “oldest African American church in Daviess County.”