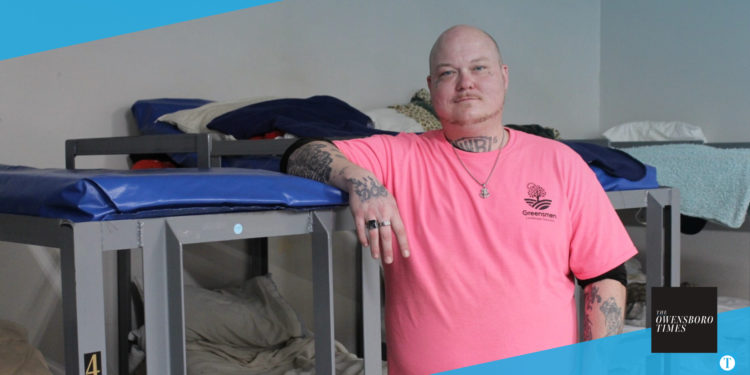 The 64 steel bunk beds that line the east side of the building at St. Benedict’s Homeless Shelter have become more than a place for a man to rest his head. They have become an investment in a man’s future as a dependable employee, a responsible tenant, an involved father, and a healthy and active member of the community.

St. Benedict’s Executive Director Harry Pedigo has been partnering with the community for the past five years through a bed sponsorship. For the first four years, the annual $500 sponsorship from individuals and businesses were used to assist with operational costs, linens, and other services for shelter residents.

“We didn’t reach that goal last year,” Pedigo said. “I think we hit somewhere around 170. At that time it did not impact us in any way negatively speaking — it reinforced what we were doing. Then COVID hit and we’ve kind of taken a major setback. Now the importance of making that goal is making sure we can keep doing what we’re doing.”

In November 2019, St. Benedict’s transitioned from a nighttime facility to a 24-hour shelter and added an additional Women & Families Services facility on Hickman Drive.

Pedigo said when the shelter only operated in the evening, they were only responsible for providing meals to the residents at dinner time.

“Now we find ourselves trying to make sure they have something to eat for all three meals,” Pedigo said, adding that the Daniel Pitino Shelter ensures the residents have lunch.

The Impact of a Pandemic

St. Benedict’s also relies on the generosity of local businesses and church organizations who sign up year-round to provide dinner for the men — up to 64 each evening. However, the impact of COVID-19 has affected the number of groups that can visit and serve at the shelter.

“Some of our food teams have had to stop financially, or out of fear of getting sick,” Pedigo said. “We’ve had to get creative and innovative in ways that we find food teams or find food in general.”

Although the number of volunteers and volunteer services at the shelter have been affected by the virus, Pedigo said the services they provide will still continue.

“Even during COVID, our ability to provide services has not ceased,” Pedigo said. “But funds are needed now more than ever. We may have been impacted like other organizations financially, but we have not allowed that to impact us. The one thing we have refused to cut back on is the way that we serve our people.”

One decision that Pedigo said was necessary in order to maximize their resources was to reduce the operating hours at the Women & Families Services facility from 8 a.m.- 5p.m. to 8 a.m.-12 p.m.

“As a good steward of what funds we do have available to us, we have reduced the hours at our women’s facility, but we have not ceased services there,” Pedigo said. “We’ve actually started providing more services. The limited hours means people get in there to get the help they need.”

As far as goals for resources for the coming year, Pedigo is still hopeful that they can reach last year’s goal for sponsorships.

“I would love to hit 200 bed sponsors, but I would still love to see us hit the 250. That would help us a lot because our reserve funds have depleted due to COVID,” Pedigo said.

“Bed sponsorship is that one event that is safe for us and the only fundraiser that we’ve really been able to do that really works for us. It is more important now than ever before.”

When asked if he thought 250 beds was a lofty goal, Pedigo said, when setting goals, the staff tries to live what they preach.

“We always set the bar kind of high because we teach aiming for the clouds to the people we serve,” Pedigo said. “We believe you can think things into existence. We want to show them that you dream big and pursue big and you don’t want to settle.”

Some might recall 2020 as a year of trials and frustration, but James Vinson said this year has been a blessing and a year of clear vision.

Vinson recalls growing up on the streets of Louisville and shared his experiences selling and using illegal drugs, being shot multiple times, and serving time in prison.

“I’ve done a lot of bad things in my life and it’s hard to accept that [God] still loves and accepts me,” Vinson said.

When he first arrived in Owensboro, through the encouragement of his adopted father Wyman Ray, Vinson said he received a donated black T-shirt and work boots from Living Hope Church. Six months later, he found himself on the streets and was quickly and warmly welcomed into St. Benedict’s.

“Mr. Johnny said, ‘We’re gonna get you a bed tonight and work on getting you a job in the morning,’” Vinson said. “I pulled what I thought was that plain black T-shirt out of my bag in the morning for work, and the shirt said St. Benedict’s on it. That’s divine intervention if I’ve ever seen it.”

Vinson admits “going through the motions” for the first few months, but as he began to see that the staff cared about him, he began to take an active role in bettering his life as well.

“Everything finally started to fall into place once I finally started to take direction from people who have been there, who are from the same walk of life,” Vinson said. “They made me a list of milestones they felt I needed to accomplish. The first one was to get my permit and get put on the list for housing while I worked to save money.”

Within a matter of months, Vinson did just that. He was able to rent an apartment, purchase his first car legally, pay his car insurance up front, and begin to take an active role in his daughters’ lives.

“When I left St. Benedict’s, I had enough money to pay my deposit and pay my first month’s rent,” Vinson said. “They helped me furnish my apartment when I first moved in. Everyone was just there to support me. I can’t express how grateful I am to the place. I’ve never had a real support group. In the past, people in the group were around me for drugs. The changes that have occurred in my life, making sacrifices and leaving my past behind me — I’m here and I’m shining.”

The future continues to look bright for Vinson, who now has a stable job and an opportunity to advance with his company.

“I never thought I’d get out of the street; I never thought it would be possible,” Vinson said. “It’s all because someone sponsored a bed for someone like me. I didn’t deserve it, but it got me going in the direction I needed to go.”

Vinson’s goal for next year is to have enough money to sponsor a bed himself.

“If I’m financially able next year, I’m going to sponsor a bed and buy one of the guys Christmas — I know how it feels to be alone at Christmas,” Vinson said. “People need to know that bed sponsorship, they are not just giving away money. Bed sponsorship is changing lives. I’m a living testimony of it.”

Those wanting to sponsor a bed through St. Benedict’s can do so monthly or annually. For more information, click here.