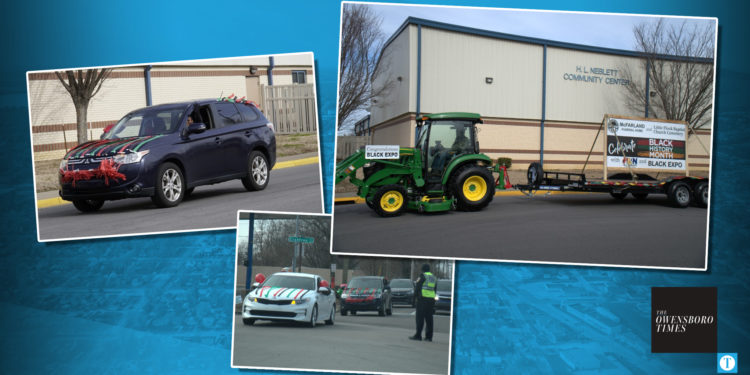 Dozens of vehicles participated Saturday in a parade to celebrate Black History Month. Event organizers said they were excited by the great turnout and positivity that helped kick off a month-long celebration honoring Black communities, cultures and leaders.

The event began at the H.L. Neblett Community Center at noon as a caravan of vehicles lined up to drive in a loop from west to east Owensboro and back.

The H.L. Neblett Center teamed up with the Owensboro Black Expo and the Northwest Neighborhood Alliance (NWNA) to make Saturday’s parade happen. Larry “Chick” Owen, director of recreation at the Neblett Center said he was pleasantly surprised by the high turnout.

“It went really well. There was a lot of participation, and I think that’s a great way to kick off Black History Month,” Owen said.

NWNA Chairperson Rafe Buckner commended Owen for being the “mastermind” behind most of the local Black History Month events that are set to take place during the month of February.

“He put everything together,” Buckner said. “He’s been on the frontline through all of this.”

Owen said a series of events will take place throughout the month of February, including a big drive-in event that will take place on a stage in the Owensboro Sportscenter parking lot. That Feb. 28 event, like most of the others, will be held so that people can remain in their cars and stay safe as the COVID-19 pandemic continues.

Black Expo Secretary Martiza Meeks commended the Owensboro Police Department for doing a “superb” job blocking off the streets, leading the parade and even waving at the kids and families from their vehicles.

“Some of our Black Expo team were tearing up,” Meeks said. “It’s been a tough year. Mentally, sometimes you just need to take a break from the social media stuff, the humdrum, the negative. Today was a positive day for everyone. I had my eight-year-old son riding with me, and I was playing James Brown’s ‘Say it Loud’ in the car.”

Owen said it was meaningful to see the younger generations rise up and show strong leadership in helping to plan and execute Saturday’s event, as well as many others.

“It’s been very pleasing for me to see these younger people coming up and taking leadership roles,” he said. “They’re doing a lot of things that are great for our community.”