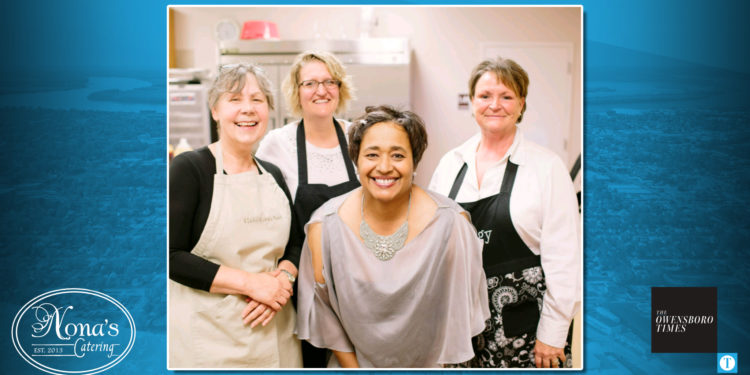 Maria Kelly has been perfecting the art of bringing Owensboro people together through food for the past 17 years. Now, the public has a chance to help Kelly win a national culinary award.

Kelly, the owner and operator of Nona’s Market and Nona’s Catering, has a passion for all things culinary.

This past December, while reading Bon Appetit Magazine online, Kelly came across a contest seeking out home chefs and decided to enter. After submitting three different entries, Kelly received a text in January notifying her that she had been selected as a finalist.

“I’m so excited; I can’t believe I was even a finalist,” Kelly said. “I didn’t believe it at first — I was afraid it was a hoax.”

Kelly said she waited a week to ensure the offer was legitimate before the magazine reached out and asked her if she was still interested. The contestants were each asked to submit photos of their culinary creations and answer a series of questions, including

While Kelly said her most requested dish for Owensboro weddings and events has been chicken, mashed potatoes and green beans, the signature dish she submitted to Bon Appetit was a little more personal.

“My signature dish was a combination of who I am,” said Kelly, who grew up in a military family with a father who served in Army intelligence. “He had a career that afforded us to live all over the world. Most of my life I was overseas, so I was exposed to a lot of cultures and palettes.”

The dish — which consists of herb roasted pork, kidney beans and rice, and sautéed greens with peppers and onions — is a nod to her parents’ roots which run deep through New York and Boston, all the way to Cape Verde, Africa, and South Carolina. Her parents now share a headstone in Arlington National Cemetery.

“I heard someone say, ‘When all you have are the memories, that’s all you’ve got,’” Kelly said. “My parents loved the kitchen and their love language was feeding. Food was the one thing they could always give to make people feel welcome and that’s a legacy I want to continue — the smells of home.”

Raising eight children, Kelly’s home has become somewhat of a test kitchen over the years, as well as a place to carry out that legacy.

“I’m not culinary trained,” Kelly said. “I cook with passion and love and want to give people a good experience.”

For three years, Kelly offered that experience to Owensboro customers at Nona’s Market at the corner of Second and Ann streets, and then on HIll Avenue.

“I loved being a part of the store community downtown,” Kelly said. “But I missed making plates for people — being invited to be a part of their event — making a memory, not just a plate of food.”

CASA Director and friend Rosemary Conder, was one of the individuals that encouraged Kelly to bring her talents and love of local food downtown, and Conder remains a loyal customer.

“Maria is the Ina Garten of Daviess County,” Conder said, referring to the Food Network’s Barefoot Contessa. “She has the gift of combining the ingredients of love and care into every dish, topped with unique and charming presentations of her food to make every event an exceptional experience to remember.”

According to Kelly, she and her catering team currently create and serve food for anywhere between 30 to 35 weddings and corporate events each year. They have catered such events as the 25th anniversary celebrations of Girls Inc. and the RiverPark Center.

Kelly is encouraged that some of the detailed photos from those events will demonstrate her passion to those voting and judging the competition.

If Kelly were to be declared the overall winner, she would receive an exclusive feature in Bon Appetit magazine as well as $20,000. As for how she would spend the prize money, Kelly said she first plans to give back, and then invest in her business to benefit the community.

“For me it’s a natural response to tithe and I do a lot with nonprofits. I love sharing my love of food with them,” Kelly said. “Any opportunity to give back to the community, I would. And it would allow the business to be able to continue to give more than a plate of food.”

Kelly said she is excited that Bon Appetit was not necessarily focused on professional chefs, but more on home chefs from small-town communities doing big things.

“Bon Appetit is one of the largest magazines in the world and they just want to highlight small towns, from what I understand,” Kelly said. “I hope that the community would see it the way I see it, as an opportunity to put Owensboro on the map, in Bon Appetit magazine.”

The competition is organized into multiple tiers. The original entrants were “hand-picked” by the magazine and will compete to be one of 15 finalists after a public vote that runs from Feb. 16-25. From there, finalists will be narrowed down to a Top 10 (public voting from Feb. 25-March 4) and Top 5 (public voting from March 4-1), before selecting one winner on April 8.

To view Kelly’s page and vote for her, click here.