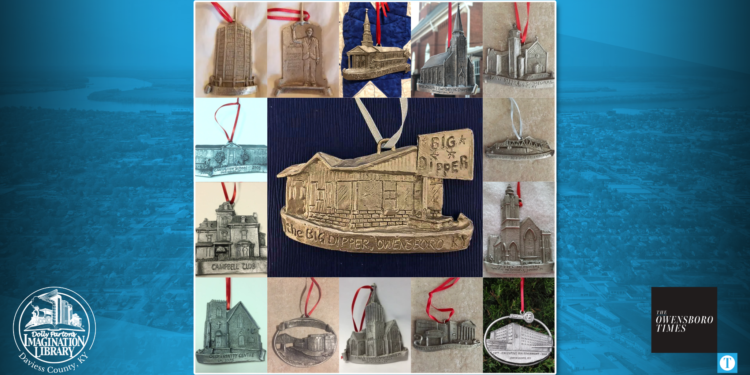 A primary fundraiser for the Imagination Library of Daviess County is their ornament project, where they pick an Owensboro landmark and have a pewter ornament made annually. This year’s ornament features the Big Dipper, a longstanding drive-in locally famous for their burgers, soft-serve ice cream, and chili during the colder months.

“We chose the Big Dipper this year because it is such a local icon; in the few days these ornaments have been in the stores, they have been going fast,” said Diane Bowers, Chair of the Imagination Library of Daviess County. “Some of the stores are temporarily out of stock, but we have more ornaments on the way. This year is unique in that you can purchase the Big Dipper as an ornament or as a magnet. This is our first year to offer the magnet.”

The Big Dipper ornament is the 17th one to be produced, and the group has no intentions of slowing down anytime soon.

The organization has created ornaments highlighting several local and historic churches, the famous sassafras tree, Union Station, and Gabe’s Tower. Other previous iconic decorations include the old and new Smothers Park, Longfellow School, the Executive Inn, the Campbell Club, and the Owensboro bridge.

Bowers said the ornaments are for sale at Danhauer Drug Store, Simply Chic, Willow Tree, and Crazy Me Gifts and Apparel.

“We are so grateful for these local businesses for selling the ornament for us,” she said. “We are such a small organization and 100-percent volunteer-driven; this is huge for us.”

Sales generally fluctuate between 200 and 300 ornaments the first year they are produced; however, Gabe’s Tower ornament tallied over 800 transactions.

“As far as the future, we are always open to ideas,” Bowers said. “All 17 decorations are currently for sale at the stores mentioned, but we are retiring three ornaments this year. When we run out, we will not be re-ordering.”

The ornaments to be retired are Union Station, the Executive Inn, and First Baptist Church. The cost for each ornament is $18.

Grandma’s Corner began the fundraising tradition locally in 2004 and passed the torch to the Imagination Library after they closed.

The Imagination Library is a program sponsored by Dolly Parton that provides one book per month to every child registered from birth to five years old. While the Dollywood Foundation selects the books and does the purchasing and mailing, the local organization pays for the books.

The local nonprofit spends upwards of $6,200 each month on books. Parents can register their child for the services at imaginationlibrary.com. Direct questions regarding the ornaments or the Imagination Library to [email protected].