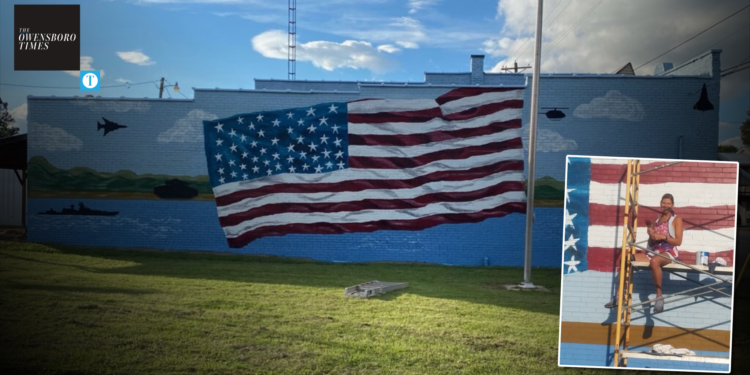 A gigantic American Flag highlights the painting, accented by vehicles associated with each military branch. Passersby will see a tank for the Army, a helicopter for the Marines, a ship for the Navy, a vessel for the Coast Guard, and a rocket for the Space Force.

“Being asked to do something so patriotic and valuable for a community was overwhelming in a good way,” McClelland said. “I was contacted by a few individuals wanting to beautify their town and honor the armed forces, which I whole-heartedly support. I don’t typically paint things like this, but I enjoy being stretched and challenged.”

McClelland said a gentleman from Fordsville called her and said they wanted a mural in Fordsville and that she was the person for the job. Until that point, the closest thing she had painted to something of this scale was a small mural at Cecil Farms.

“I am constantly being asked to do things that I don’t feel qualified for,” she said. “I’m very much a free-hand artist, and I typically don’t feel comfortable painting things that are real. I generally paint whimsical things like animals and floral arrangements that are made up in my head.”

McClelland is a Madisonville native and Vanderbilt University graduate who practiced speech pathology for 5 years before having children. She and her husband moved to Owensboro 17 years ago, and as her kids grow, her hobby has slowly transitioned into more of a business.

“I’m getting busier all the time, most likely because I have more free time. I’m always looking for more business,” McClelland said. “When my fourth child was born, I started dedicating more time to the craft. It started with people asking me to paint for them and grew from there.”

McClelland painted the many murals in Owensboro Pediatrics, and her works can be seen all across town. Her pieces are available for purchase at Willow+Pine, Julep, and Kennneise Salon. She also offers custom work for commissions out of her home.

She said working on those scaffolds in Fordsville was a surreal feeling.

“If you want affirmation, go to a small town,” she said. “People were honking, cheering, and clapping for me as they passed by. It was really encouraging, almost as if you’re on top of the world. Giving people pleasure — that is my purpose for painting.

“It was the vision of a few men from Fordsville, and they helped me with every aspect, from priming the wall blue to moving the scaffolding around and handing me paint cans. The town of Fordsville has been so encouraging, kind, and heartwarming. It was the most physically challenging job I’ve ever done, but the people made it my pleasure.”

To inquire about McClelland’s pieces, reach out to her on Facebook here.