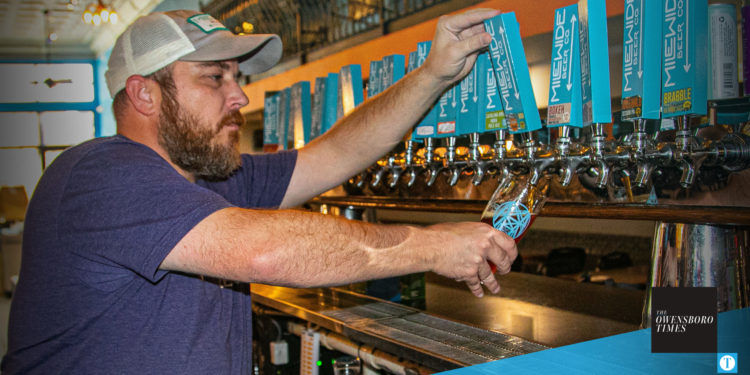 Owensboro is now home to a pair of stops on the new craft beer trail called the West Kentucky Brewery Hop, with a third destination being added soon.

Owensboro’s current destinations on the trail are Mile Wide Beer Company (119 E. 2nd St.) and The Brew Bridge (800 W. 2nd St.). The third stop will be Goodwood Brewing & Spirits, which is expected to open in early 2022 on the first floor of The Enclave at 101 Frederica St.

The Hop, which includes 13 breweries overall, was launched Tuesday. It is a partnership among convention and visitor bureaus in Paducah, Murray, Benton, Bowling Green, Glasgow, Hopkinsville, Henderson, Beaver Dam and Owensboro.

Anyone who is 21 or older can participate by first obtaining a passport from their local CVB or local craft brewery. There is no timeline for when the passport must be completed.

“Once you have your passport, you are encouraged to try a beer at each of the breweries on the trail,” said Dave Kirk, destination management director for Visit Owensboro.

After purchasing a local beer, the brewery will stamp the participant’s passport. Following the completion of the trail or getting a stamp from at least seven breweries, participants can mail the passport to the Henderson Convention and Visitors Bureau to claim their prize. Once the Henderson CVB verifies the passport, it will be mailed back along with a West Kentucky Brewery Hop pint glass.

“The craft brewers in Kentucky, as in many other states, are a close-knit community,” said Palmer Dempsey, Taproom Manager at Mile Wide Beer Company. “And that community grows even tighter when you travel to the western part of the state. So, the formation of the West Kentucky Brewery Hop affords us the opportunity to promote not just Mile Wide, and not just our friends breweries, but indeed, the Western Kentucky craft beer community as a whole.”

Brew Bridge owner David Haynes added, “The Western Kentucky Brewery Hop is something we’ve been excited about for a couple years now. In addition to bringing in fresh faces to local breweries, it also encourages the spread of our local beer outside of its brewed location. We can’t think of a better way to share our passion and beer with a wider audience.”

Rebecca Redding, Vice President of Marketing for Goodwood Brewing Company, said they are excited to be opening in Owensboro and joining “so many other great spots” on the Western Kentucky Brewery Hop.

“This is one of the largest collaborations between convention and visitor bureaus in the commonwealth,” Kirk said. “It’s gives people multiple reasons to check out the western part of the state and we couldn’t be more proud to be a part of it.”