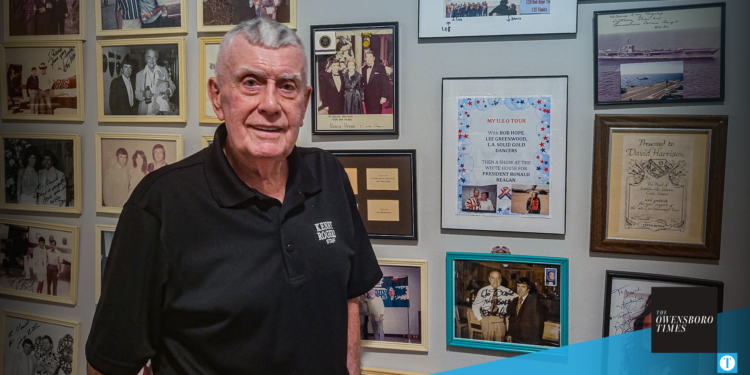 David Harrison is a man who has worn many hats. In his 87 years, he has worked as a tour manager, showroom manager, restaurant owner, owner of a limousine company, philanthropist, and now restaurant host at Owensboro’s Red Lobster.

Harrison recently returned to Owensboro to be closer to family after living in Florida for 10 years. Originally from London, England, he first moved to Owensboro to manage the Executive Inn Rivermont’s Showroom Lounge in 1984.

The Executive Inn, which closed in 2008 after 30 years of business, was a 650-room hotel with a 1,000-seat showroom, offering live entertainment featuring performers Wayne Newton, Frankie Avalon, and The Oak Ridge Boys, among others.

Working as showroom manager gave Harrison the opportunity to form valuable connections with the venue’s performers, which led to him to become tour manager for musician Lee Greenwood.

“I started as a tour manager with Lee Greenwood,” he said. “While working for Lee, we did some shows with Kenny Rogers, and then we did a couple of shows with Bob Hope.”

In his role as tour manager, Harrison was responsible for managing transport, coordinating with venues, and making sure that all events ran smoothly. Harrison said that he organized more than 100 shows for musician Kenny Rogers and organized comedian Bob Hope’s United States Organizations tours overseas.

In 1982, Harrison was invited by Hope to accompany him to a dinner party at the White House, where he had the opportunity to meet President Ronald Reagan and First Lady Nancy Reagan.

Harrison said that he had the opportunity to meet countless celebrities and traveled to all 50 states while working as tour manager.

“All I can tell you is that everyone I’ve worked for has been great,” Harrison said. “They’ve always been good to me.”

These days, David enjoys his position as host at Red Lobster. He said that his favorite part of the job is interacting with the customers.