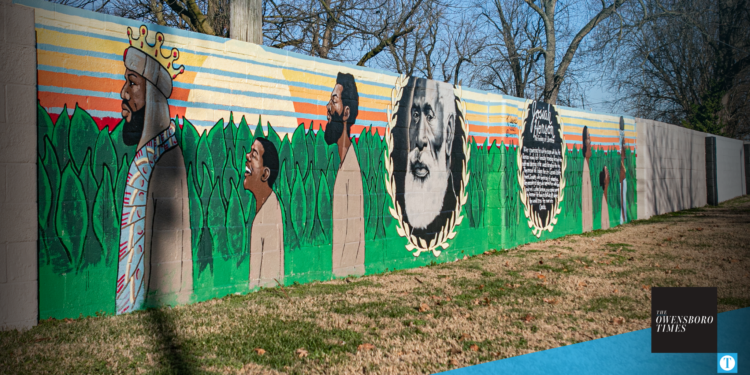 Two more panels of the wall at Kendall-Perkins Park are primed and ready to be painted by local artists Leeza Dukes and Zion Riley as soon as the weather allows. Two panels were completed toward the end of 2021 and feature images painted by K.O. Lewis.

The project began in 2020, with the Northwest Neighborhood Alliance taking the lead on finding artists to create a mural dedicated to African-American history. The mural spans the entire 625-foot wall in Kendall-Perkins Park and is divided into 27 panels.

Alliance Chairperson Rafe Buckner said each panel is about 20 feet wide, and most artists will only paint one panel. Lewis’ images of Josiah Henson span two panels, though.

Two more panels in separate locations on the wall are ready for paint as soon as the temperatures are warm enough, Buckner said.

Dukes, a member of the Owensboro Art Guild, will paint an image of Harriet Tubman. Riley, an Owensboro High School graduate known locally for his snow sculptures, has submitted an image for the other section that has been primed.

“All we’re waiting on is some warmer weather,” Buckner said. “We’re ready to hit the ground rolling.”

Buckner said they have several other artists also working to get their mockups completed so they can be submitted to the City for approval.

Buckner added that they also need more funding to complete the project, which is set to be fully completed by at least 2025. He said they estimate the entire project will cost about $54,000 because they want to help provide all the materials each artist will need.

Buckner said about $18,000 had been raised so far, including $5,000 from Daviess County Fiscal Court and a few thousand dollars from the City of Owensboro.

Buckner said many donations came in after the initial panels were vandalized.

Local artist Aaron Kizer was actually the first to paint two images on the west end of the wall, but in January 2021 the panels were vandalized with racist messages and symbols. Though they initially hoped to restore those images, Buckner said they unfortunately had to be painted over and would have to be redone from scratch.

Anyone interested in donating to the project can contact Executive Assistant to the Mayor Adrienne Carrico at [email protected] or 270-687-8561.