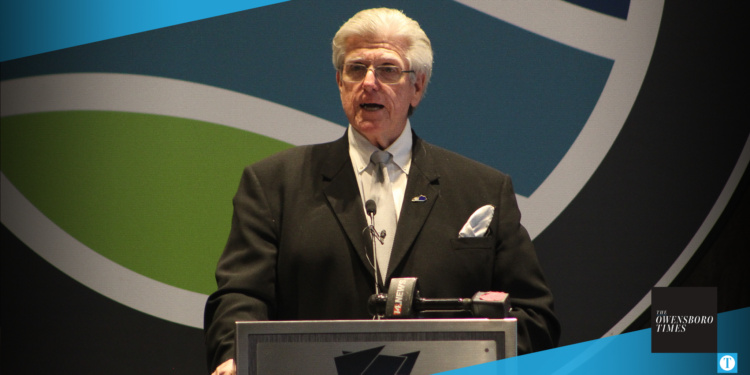 Mayor Tom Watson discussed the latest details of the joint hotel/apartment complex/parking garage originally planned to open in 2021, as well as a separate downtown apartment complex, during his annual State of the City address Thursday.

The first project included the development of a Home2 Suites hotel, Riverfront Brio Apartment Homes, and a parking garage — all in one structure located across from the Convention Center. A ceremonial groundbreaking was held between the City of Owensboro and developer Gulfstream Commercial Services in June 2019, but numerous delays have resulted in nearly no progress so far.

Watson on Thursday said construction will begin this year. He said the hotel will have 121 rooms, while the apartment complex will feature 79 units with two-thirds being one-bedroom units. The parking structure will have 254 spaces.

Watson said the complex will have 11,300 square feet available for retail and restaurants on the first floor.

Watson said the second apartment complex will be the LUX Apartment Home project, containing around 100 units. It is also expected to have room for retail and restaurant space. Watson said it will be located in a spot to support the students and faculty of local colleges who wish to live close to both campus and downtown.

In total, there is $100 million in construction planned for downtown in the coming years.

“This is the third leg of the three-legged stool. We got the retail, we got the entertainment. Now we’re going to get the housing downtown,” Watson said. “We look forward to the addition of these amazing properties to our beautiful downtown, which will be certain to attract everyone from senior citizens to young professionals to small families to OBKY.”

Watson also addressed other recent developments for the City of Owensboro, as well as how he hopes to capitalize on them going forward.

He noted one of the large highlights was the declaration of Owensboro as a High Intensity Drug Trafficking Area, along with the task force that will be created to combat the drug trafficking within the city and region.

Watson also further discussed the City of Owensboro recently declared itself as the Bluegrass Music Capital of the World. Using this title, he plans to combine bluegrass music with an economic development component to bring the makers of guitars, mandolins, violins and other instruments to fill in some of the open locations downtown.

The mayor also announced that in an effort to move into a more sustainable future, the first fully electric bus will arrive by the end of January, and the city hopes to install eight more bus shelters.

“It breaks my heart to see someone stand on the side of the road in front of a sign, holding a child and a bag of groceries with an umbrella in the rain,” Watson said. “We’re going to work harder and harder trying to resolve that problem.”

Additionally, he reflected on the development of Jack C. Fisher Park, renovations at Dugan Best and Thompson Berry Parks and plans to expand the Merchant Centre Court Tennis Facility.

As plans unfold for the Northwest Revitalization Area, he is also thankful for the work the Neighborhood Alliance has done already with the inclusion of a mural at Kendall-Perkins Park.

“You saw the progress we’ve made in one year,” he said. “It was all the wonderful things that we presented to you today, but we must strive to do more. Not for us but for the next bunch.”