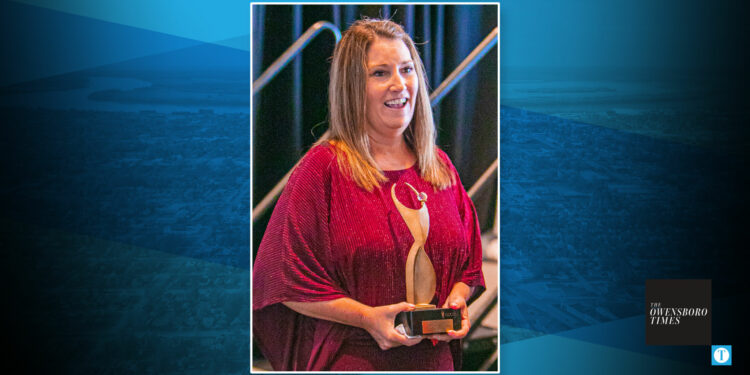 The 2022 ATHENA Award was presented Thursday to Karla Ward, executive director of New Beginnings Sexual Assault Support Services. The ATHENA Award is presented annually to someone who empowers women, strives to better the community and has achieved excellence in their profession. The annual Legacy Award — which honors a woman posthumously for the contributions she made to society — was awarded to the late Jessie Howard.

When she accepted the award, Ward said she did not expect to win, especially among a field of so many other deserving women. Ward credited her staff, New Beginnings administration, and support from the community as major contributing factors to her success and what has been accomplished at New Beginnings.

“It takes a village, as they say. If it was not for my fantastic staff supporting me, I know that I wouldn’t be here in this position,” Ward said. “… I also want to thank my board of directors, past and present. They have always let me kind of do my own thing. They’ve always put their trust in me. And their support means more than they will ever know.”

There were a record 14 nominees for this year’s ATHENA award. With all of them touting their own impressive resumes, Ward was humbled to be selected to receive the award.

“Many of you have been an inspiration to me, and congratulations on your nominations,” Ward said to the other nominees. “You are all very deserving.”

Ward’s biography and list of accomplishments was presented by Kirk Kirkpatrick, who served as the emcee of the luncheon.

Ward began her career with New Beginnings Sexual Assault Support Services in 1998 and was named executive director in 2007. Under her leadership, the nonprofit’s all-female staff and budget has nearly tripled.

Through the quick growth of the organization, Ward recognized the need for and implemented a supervisory level of women who could provide mentoring and leadership to their individual teams.

She also implemented an Infant to Work policy, allowing mothers to bring their babies with them to work until they began crawling.

“Her dedication to and respect for her staff is demonstrated by her willingness to be a part of the on-call rotation and she demands that staff practice self-care and rest,” Kirkpatrick said. “Her mentoring, encouragement and demonstrated understanding of the challenges faced by working females and mothers and of the stress of the complex sexual trauma that her staff works deal with daily, has yielded a very low turnover rate.”

Ward has lead efforts to provide programming and to educate young girls on the importance of healthy relationships; to maintain services in a seven-county area; and to ensure that marginalized and underrepresented communities are served including communities of color, LGBTQ, males, immigrant and refugees, detention facilities and human trafficking.

Prior to the COVID-19 pandemic, amidst a growing caseload stretched over a wide area and with client transportation to their offices becoming problematic, Ward implemented telehealth services before telehealth was commonplace. That helped New Beginnings to more seamlessly provide ongoing services during the pandemic.

Ward Our recipient is a graduate of Western Kentucky University. She graduated from Leadership Owensboro and is a member and former board chair of the Kentucky Association of Sexual Assault Programs. Additionally, she is chair for the statewide Program Implementation Committee on Green Dot Bystander Intervention. Locally, she is engaged with the Owensboro Regional Suicide and Prevention Coalition, Impact 100, and the Kiwanis Club of Owensboro.

Howard was born in Maceo in 1893 to a farming family. She graduated from Kentucky State University in Frankfort and later taught for 53 years in the Owensboro Public Schools system. Her career primarily centered on teaching the 5th grade at the former Western High School, and later after integration at Goodloe Elementary.

The Legacy Award was presented by Sue Napper, the awards luncheon chair.

“Howard wanted additional experiences for her girls and thus formed a Girl Scout Troop for girls of color,” Napper said. “Through her efforts countless girls were assisted in discovering their strengths. They rose to meet new challenges, to find their voices and to just have fun experiencing the earth and nature. Many of her scouts were poor and could not begin to think about going to camp. But Miss Jessie’s tenacity and heart found a way to pave the path for a week-long residential camp for her girls for many years, manned by volunteers and supported by donations.”

Napper said Howard may not have held lofty titles or been on numerous boards, but she still found a way to make a difference.

“She made a difference in this community and in the lives of countless students, of young girls, especially those of color,” Napper said. “She is a reminder that we can all make a difference if only we will just look and act. Her story needs not to be forgotten and we should all feel empowered and inspired to go out, to reach out and help someone else along their life’s journey.”

It takes a village, as they say. If it was not for my fantastic staff supporting me, I know that I wouldn’t be here in this position.

Many of you have been an inspiration to me, and congratulations on your nominations. You are all very deserving.

I also want to thank my board of directors, past and present. They have always let me kind of do my own thing. They’ve always put their trust in me. And their support means more than they will ever know.

I’m going to continue my efforts of working with clients and our community to end sexual violence. I’ve dedicated the last 24 years to do that, and I’m gonna stop quite yet.