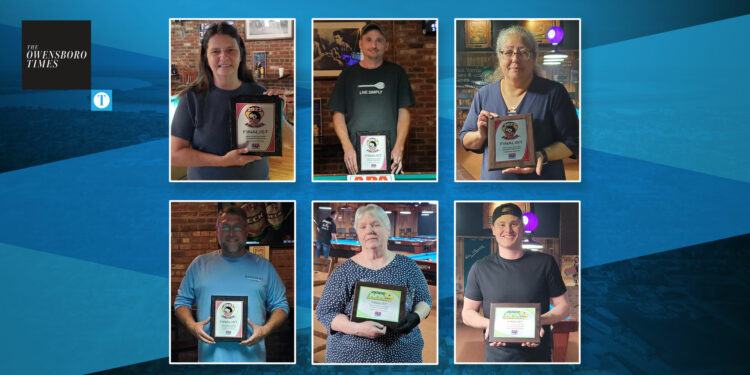 The Owensboro American Poolplayers Association has more than 300 billiards players locally. Those involved in running the league say it’s about much more than the sport, as members develop strong relationships that extend into daily life. Still, players can earn the chance to compete in national tournaments through their play in the local league.

The APA was founded in 1979 by Terry Bell and Larry Hubbart, who at the time were touring billiards professionals. Currently there are nearly 250,000 members throughout the United States, Canada and Japan.

“Their goal was to organize the sport of pool on the amateur level and to encourage the growth of the game,” said local Owensboro APA League Operator Angel Spooner.

In 2007, the Owensboro APA was formed by Spooner, who took the 14 local teams that were playing for the Southern Indiana APA in Evansville and based them in Daviess County. In the 15 years since, the Owensboro APA had as many as 60 teams; it currently has 52.

The primary focus of the Owensboro APA is team play. That’s when players join a team and play the required matches to establish a player’s ranking, which Angel said is necessary for additional opportunities within the league.

“Each year we send two teams to Las Vegas to compete in the World Pool Championships,” Angel said. “We also advice three doubles teams, a captain’s team and, lately, a ladies’ team.”

There are also opportunities for individual players to earn an opportunity through a Singles Regional Tournament.

There are several ways for people to join the Owensboro APA, but Angel said that the two most successful ways are to build a team and pick a home place to play among the participating league locations, or to visit one of the host locations during specific times to play either 8-ball or 9-ball.

“If you prefer, you can also message Owensboro APA on Facebook and we will be happy to help you find a team to start on,” Angel said, adding that over time as new people meet others they switch teams, and many of the long-standing captains have helped introduce new players to the sport.

“We, as players, have built some of the strongest relationships among our members,” Angel said. “We support each other in competition and life. We also support each other’s businesses as well… We have almost any type of business you may need. It is not only friendly competition but also much more.”

Quintin Spooner, Angel’s husband, said that one of the things he most enjoys about being one of Owensboro APA’s league operators is watching the players grow.

“Take Magda Harbison for example,” Quintin said. “She joined the Owensboro APA in 2013, and had never really played pool before.  She fell in love with the sport, even building her own team so she could compete against her husband. In 2019 she advanced to Las Vegas to compete in both the 8-Ball Doubles Championship and Ladies Team Championship. This year she recently won the Singles Regional in Nashville, and will be competing in the 8-Ball Classic this May in Las Vegas.”

Angel said that what she most enjoys about the league are the relationships that are built among players and how fun it is to have a night out to relax, play pool and laugh.

The APA is open to any person over 18 years of age, and billiards knowledge is not required.

“If you have never picked up a pool stick or have been playing for years, this is a league for you,” Angel said. “I hear people say all the time that they are not good enough to join, but some of our most dedicated players are the ones that made those comments. It is a handicapped league ran with the equalizer system. Anyone can play and anyone can win.”

In early May, the APA Championships will be held in Las Vegas. Six players from the Owensboro APA will be in Singles, four in Doubles and two referees from the local league will assist with the tournament.

Additionally, in June the Owensboro APA will host its Tour of Champions which will determine which teams will advance to the APA World Pool Championship in Las Vegas.

Home » Features » Community » Owensboro APA still going strong, strives to be a fun league for players of all talent ranges