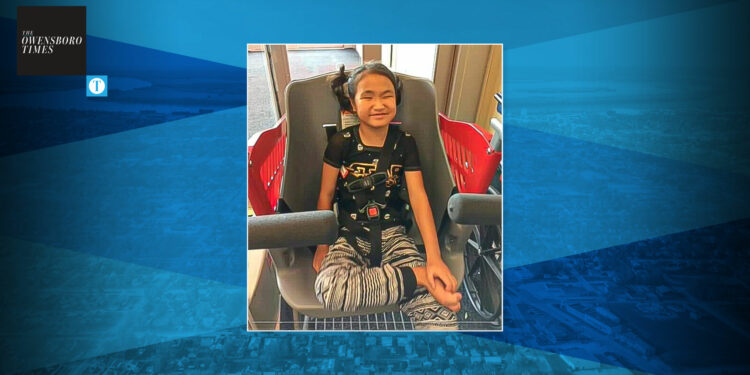 Kennah and John Carpenter adopted their daughter Sarah, who was 5 years old at the time, from China in 2015. When they brought her home, the couple knew she was visually impaired and deaf, and as many more medical conditions surfaced, they began to look for ways to help her — the most recent solution being the journey for bringing home a service dog.

“Very quickly, we realized there was a lot more going on than we were aware of,” Kennah Carpenter said. “She’s nonverbal, has retinal detachment in both eyes, and had several surgeries trying to save the right eye.”

When the surgeries were unsuccessful, the family learned it was the end of the road for regaining sight, and she was going blind. With the presence of epilepsy, a heart defect, and kidney disease, Sarah’s physical struggles prompted further research about service dogs.

“When she has seizures, she stops breathing, so I wanted to look into something to help her. Since she was losing her sight, our priority was her sight for a while. We feel like the timing is right,” Carpenter said.

To be eligible for a service dog, there are requirements including the frequency of seizures. If the person is experiencing constant seizures, they would carry that scent all the time and the dog would not be able to detect the scent for separate occurrences.

“The process to obtain the service dog is over 2 years, and money is due up front to start the process,” Carpenter said. “I want to give Sarah a little bit of independence, security and protection.”

Sarah, who is now almost 13, cannot be left alone due to her physical impairments and self harming behaviors.

“The dog can intervene and hopefully help us in that way,” Carpenter said.

“She sleeps with us and cannot be left alone. We have four boys and they are her protectors,” Carpenter said. “I will be pretty much the dog’s handler because Sarah and I are attached at the hip. I want this to be the real deal because I need help and Sarah needs help.”

The Carpenter family says they are grateful for the support they have received so far and they appreciate each donation.

“It’s really been a whirlwind,” Carpenter said. “We have been so overwhelmed with just surviving some days that I don’t want to lose sight of God’s grace. There’s no way we could do this on our own — financially, emotionally or physically.”

To get involved or to donate, visit 4pawsforability.org/donate-to-4-paws/ and designate for Sarah Carpenter.