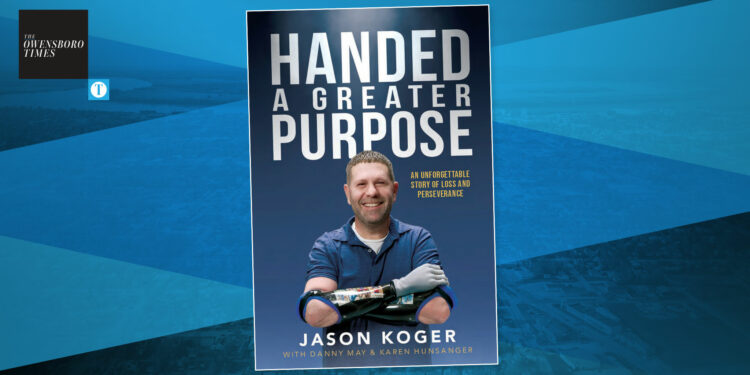 When the COVID-19 quarantine left most people stuck at home enjoying some downtime, Jason Koger took the opportunity to finally write a book. Like many public speakers, Koger faced months of cancellations when the pandemic hit, so he used his freed-up calendar to focus more time on becoming the author of Handed a Greater Purpose.

Over the past 14 years since a 4-wheeler accident that resulted in the loss of both arms below the elbows, Koger has been sharing his story of overcoming obstacles through faith and a positive attitude. He started sharing that message at churches and schools in Owensboro. Soon after, other churches started calling and he said God opened more doors to speak to congregations and conferences from Louisville to Las Vegas.

The book opens with a scene from the TedX Evansville stage, recalling how Jason began his presentation by holding up his favorite T-shirt that reads, “Look ma, no hands!” But that TedX talk just hits the high points from his story of overcoming adversity.

“It’s actually easier to talk for an hour than it is for 15 minutes,” Koger said, “because I can’t cover all the different parts of my story in an hour. So to boil it down to 15 minutes is even harder.”

As a result, Koger doesn’t get into the details of his accident in his motivational speeches.

“Those details aren’t important anyway,” he said. “What God has done with my life since then is what I want to focus on.”

Still, people are curious. And they want to know. Handed a Greater Purpose is a way to tell the whole story.

“People have been telling me for years I need to write a book to tell my story,” Koger said. “I finally decided it was time to do it.”

He said he wanted the book to read like a movie. One interesting feature of the book is how other people involved tell their piece of the story. So along the way, readers hear from Koger’s parents, his wife, and even the surgeon and nursing staff who cared for him at Vanderbilt University hospital the night of his accident.

The chapter about the day of his accident, for example, unfolds in real time with what started like any other lazy Saturday until an unexpected turn of events left emergency room doctors calling for a life flight to the Vanderbilt burn unit where a dramatic surgery saved Koger’s life.

“Then, I was sedated for 3 days after my amputation, so we had to have a way to continue the story because I basically don’t remember anything from the time they wheeled me back to surgery until I woke up three days later,” Koger said.

From there, the book describes the recovery process of getting his life back while adjusting to life as a bilateral upper arm amputee who still wanted to be a good husband and an actively involved father.  Along the way, readers also get an inside look into the importance of getting fitted successfully for prosthesis, which was another turning point for Koger. Today, he is recognized in the industry as one of the most proficient prosthesis users in the world.

Koger credits his faith in God and constant support of his family for helping him discover his greater purpose.

“That’s one thing I always stress is that I have an amazing wife and parents who have always supported me in everything, but I also can’t say enough about how amazing this community was to me and my family after my accident,” he said. “There were so many people — and some of them I didn’t even know — who helped us out in every way you can imagine. I think Owensboro is the best place to live and raise a family because people here care for each other and help out when there’s a need. We saw that after the tornado, the ice storm, and any time there’s a tragedy, people always step up and help a family who is struggling. You don’t see that in big cities. There’s no place I’ve ever heard of or seen that’s like Owensboro.”

Facing unforeseen circumstances that could have easily left him depressed and defeated, Koger stayed positive and now dedicates his life to making a difference for others — whether that’s through his motivational speaking engagements, Handing Back events, or showing new amputees how to use their prosthesis more efficiently by teaching them what he’s learned through his own experiences.

“More than anything, I want people who read this book to know that bad things happen to all of us,” he said. “We all go through tragedies. But we can keep a smile on our face. God will get us through.”

Handed a Greater Purpose was published through Butler Books (Louisville, Kentucky) and can be purchased online here or at one of two in-person author appearances: at St. Maximilian Kolbe Bookstore on July 30 or the Daviess County Public Library on Aug. 4.