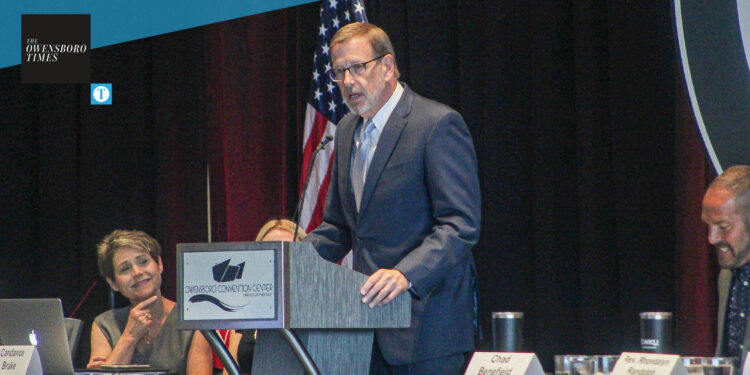 Owensboro claimed itself as the Bluegrass Music Capital of the World in November of last year, and according to former International Bluegrass Music Association Executive Director Paul Schiminger, there’s a case for the City to take that beyond just a slogan.

At Thursday’s Rooster Booster, Schiminger explained the Owensboro Bluegrass Task Force was formulated to push its claim and ensure it didn’t become like other cities that tried to make a mark but never captured the momentum to do so.

Schiminger said that he thinks Owensboro is positioned to follow the example cities that have created a lasting moniker, such as Austin, Texas with ‘Keep Austin Weird;’ Nashville with the ‘Music City;’ and Louisville’s three titles of Derby City, River City and the Gateway to the South.

“Bluegrass Music Capital of the World has not been claimed by any other city, nor does any other city have the credentials that Owensboro has,” Schiminger said.

Owensboro is home to the Bluegrass Music Hall of Fame and Museum, the home of the only monthly bluegrass magazine Bluegrass Unlimited, the music festival ROMP, and more.

Schiminger said for Owensboro to continue to market itself as the Bluegrass Capital, it needs to be the center of growth and maintain its energy.

Andrew Davis, author of Town Inc., joined Rooster Booster via video to showcase the excitement he has for the development of Owensboro as the Bluegrass Capital.

Davis works with communities when it comes to marking claims and slogans, as well as building the momentum behind the claim. He praised the work the City has done thus far.

“I even noticed when Rolling Stone named Owensboro one of the seven must-visit places music fans should flock to now,” Davis said. “…I am so impressed with the progress you’ve made in such a short amount of time.”

He urged that for the claim to really take off, it takes the energy of the City spreading the excitement to its own audience — whether it be friends, clients, prospective visitors or even just in general conversation.