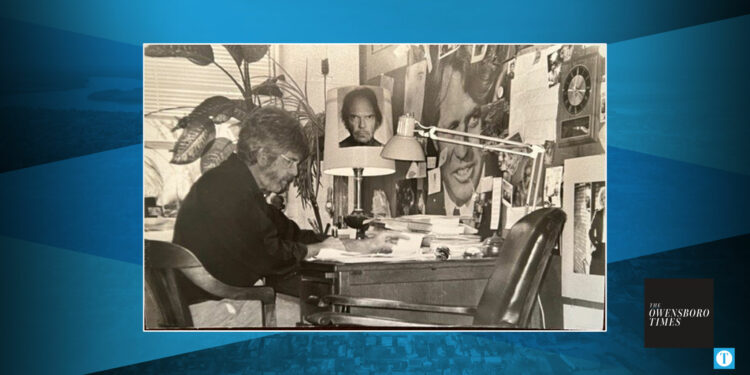 David Bartholomy was known by his students at Brescia University as Bart. After hearing the news of his passing on Saturday, several former students and friends turned to social media to voice the impact the associate professor of English had on their lives.

“I took any course with his name on it because it was Bart,” former student Joey Goebel said. “When he had us do his exercises, he always did them himself. Think about that: This was a teacher who gladly did his own assignments.”

After graduating in 2002, Goebel, who is now a published author, said he made it a point to get together consistently with Bartholomy to stay connected.

“After our time in the classroom together ended, we remained friends through the years, and I would often visit him in the office (shown in the photo accompanying this article),” Goebel said. “ Stepping into that office was like entering the psychotic brain of a bohemian saint. The books, the records, the pictures of his dear family — just stepping into this room made you five percent cooler every time you visited.”

Beyond the classroom, Goebel acknowledges that Bartholomy played a significant role in his success as an author.

“No one influenced my writing more than this man. I am almost certain I would not have become a novelist if not for him. Meeting him forever changed me,” Goebel wrote in his tribute on Facebook.

Bartholomy carried a complex and unique outlook on life, something that impacted his students decades after being in his class.

“One of our favorite authors Kurt Vonnegut had a saying about having an audience of one in mind. He would say, ‘As long as my writing will please my sister, this audience of one, then I have written well.’ For me, Bart became my audience of one,” Goebel said.

The associate professor of English had a forward-thinking approach to education, challenging the status quo.

“Yes, Bart was from the future. Anybody that had him as a teacher knows what I mean,” Goebel said. “He was so ahead of all of us in his progressive thinking, his intellectual forms of rebellion, his iconoclastic attitudes. It’s almost as though he was from another planet. I mean that in the best possible way. He was a true original. He wasn’t one of these progressives that checked all the right boxes. He believed what he believed in.”

When Goebel first became a published author, he considered changing his name to Joey November. Bartholomy quickly rejected the idea.

“He told me I was being way too affected. He said to just be Joey Goebel. So now I’m Joey Goebel for better or worse. There were no affectations with him. He was the counterculture you would read about from the Beat poets but he was real,” Goebel said.

While social media has its pros and cons, Goebel recognizes during a time like this, there was a special opportunity for former students and friends to share their memories of the influential educator.

“I have to admit reading people’s comments and having that platform to pay tribute to him was something I was grateful for and I appreciated the opportunity,” Goebel said. “I’ve been thinking of him nonstop. It wasn’t a shock. I knew he had been unwell for quite a while, but with a guy like him, you think of him being ageless and timeless.”

As Goebel reflects on his time in Bartholomy’s class and the impact of his guidance, he can see a direct correlation between his time at Brescia and who he is today.

“It’s no coincidence that I’m an English teacher and I teach creative writing,” Goebel said. “Every time I walk into my classroom I’m carrying Bart with me.”

Although Bartholomy did not seek attention, Goebel said he deserves it.

“I will confess that sometimes I have called being a writer a curse,” Goebel said. “But Bart pushed me toward becoming one, and my own past would look quite a bit drearier, dumber, and duller without him. I am so lucky to have known him.”