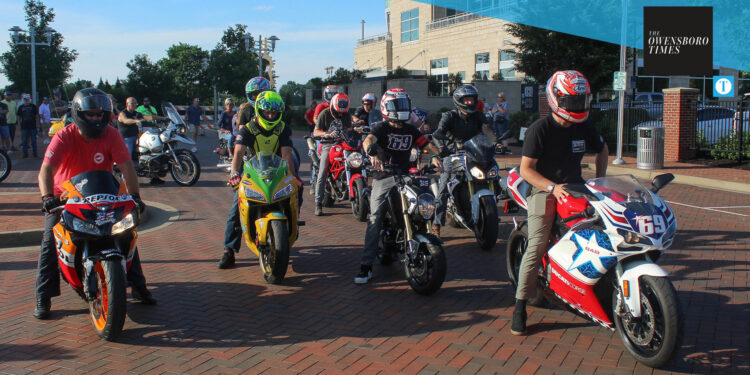 The Nicky Hayden Memorial Foundation on Thursday held the 5th annual charity ride across the city to celebrate Hayden’s life and legacy. It was one of the bigger turnouts of people riding their motorcycules in Hayden’s honor since the ride began in 2018.

“It’s awesome to see all the support from the city and also the Lure and Ben [Skiadas]. They have put in so much work, and so many people in the city pitched in and helped out,” said Roger Hayden, Nicky’s younger brother.

Owensboro Mayor Tom Watson declared that June 9 would forever be known as “Nicky Hayden Day” during the unveiling of the bronze Kentucky Kid statue downtown in 2018. That particular date — 6/9/18 — was chosen in reference to Hayden’s now retired racing number, #69.

The ride — which started at the statue and traveled to Hayden’s final resting place — acts as a fundraiser for the Foundation to raise money for different community projects.

Held in partnership with Lure, Ben Skiadas had special limited edition Four Roses bourbon bottles which went on sale at the event. They only had 169 bottles that were sold on a first-come, first-serve basis.

Additionally, the celebration included an auction and a raffle, all of which returned the funds to the Foundation.

“It’s really important that we hold this event because Nicky’s Foundation is located here in Owensboro and this is where we mainly give back and where he comes from,” Roger said. “He was really proud to be from Owensboro and Kentucky, so it’s awesome to have this ride here in memory of him.”

The Nicky Hayden Memorial Foundation works primarily out of Owensboro helping local kids. Over the last year, Roger said they have worked with the Make a Wish Foundation to help a local child with cystic fibrosis get his dream pirate ship playset.

With the money raised from this event, they will be able to evaluate some programs they are able to do in the future, such as a backpack drive during the back-to-school season.