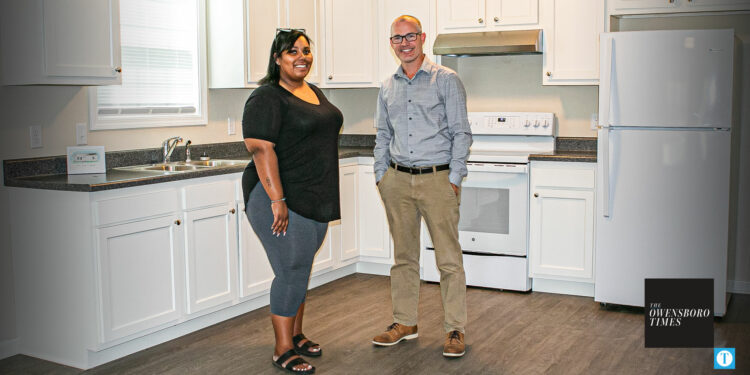 Hayli Casebier stands in her new home with Jeremy Stephens, Executive Director of the local Habitat for Humanity chapter. | Photo by Ryan Richardson

Hayli Casebier was all smiles Wednesday afternoon as she stood in her new home on West 5th Street. The 27-year-old Owensboro resident is the latest person to complete the local Habitat for Humanity program, putting in hundreds of hours of work en route to owning a brand new home. Casebier’s is also the first local Habitat home to include two bathrooms, as the organization is making a strong effort to modernize their builds and give the residents more options in the design.

Casebier previously lived in a two-bedroom apartment with her two children. She then saw an ad for an opportunity to go through the Habitat for Humanity program, which she has been a part of for 3 years now.

Her new home was originally supposed to be completed last year, but delays due to the pandemic slowed the process down.

“It’s been a pretty up and down journey, but a lot more ups and downs,” she said. “I’m super excited to finally be here. This is the moment that I’ve been waiting for, for 3 years.”

Casebier will live in the home with her two children. She signed the closing paperwork Wednesday, and a dedication ceremony will take place today at 4 p.m.

Like all program applicants, Casebier had to complete 350 sweat equity hours before she was eligible to move into a Habitat home.

“I actually got my hours done pretty quick, in like a year and a half, because I wanted to make sure I could get here,” she said. “I think I’ve done everything besides mow to get my sweat equity hours.”

Habitat Executive Director Jeremy Stephens said figuring out which applicant will go into which home does take some coordination as there are several variables involved — from when an applicant finishes their hours, to what houses are available, to what the preferences are of each person.

“It varies from person to person and where we lie in each individual scenario,” Stephens said. “It really comes down to what’s available at the time and what they’re looking for, whether that is location to schools or accessibility to grocery stores or access to public transit.

Casebier had three houses to choose from, but said it was an easy choice. Two of them weren’t her style, she said, plus the one she picked made her neighbors with a friend who also recently completed the Habitat program.

“I wanted to be by Hannah,” Casebier said. “We helped each other throughout the program. I think if we didn’t have each other, we probably wouldn’t have made it here. We really pushed each other to get it done.”

Hannah Crite moved into her Habitat home in June. It was technically the 150th house on the Habitat build schedule, but it was finished ahead of the 149th because it was actually constructed in large part by the Home Builders Association of Owensboro.

Stephens said the Habitat crews could tell the two women had a strong friendship as they worked their way through the program.

Both homes were historic in their own ways. Crite’s was the local Habitat’s first ever solar-powered home, while Casebier’s is the first to have two bathrooms rather than one.

“We are really trying to modernize what we’re doing,” Stephens said. “We’re trying to match our building style so that affordable housing … can also mean accommodating houses. We don’t think building a one-bathroom house gives them any resale value if the owner has to move later. We want to give them that equity power in the house.”

Stephens said the homeowners are also being given more choices of what they can put in the house when it comes to options such as fixtures, paint, and appliances, as well as some input on what the front of the house looks like and what the parking situation is.

“We’re really trying to give more options to the people so that when they get through this arduous process, it is truly their home that they picked out and is perfect for them,” Stephens said.

Casebier said she was grateful to the Habitat crew for always pushing forward to make sure she wound up in her home.

While the hard parts of the process can be discouraging, Stephens said fighting through that to find success is why the Habitat program works.

Casebier added, “And the more appreciative you are for your own home.”