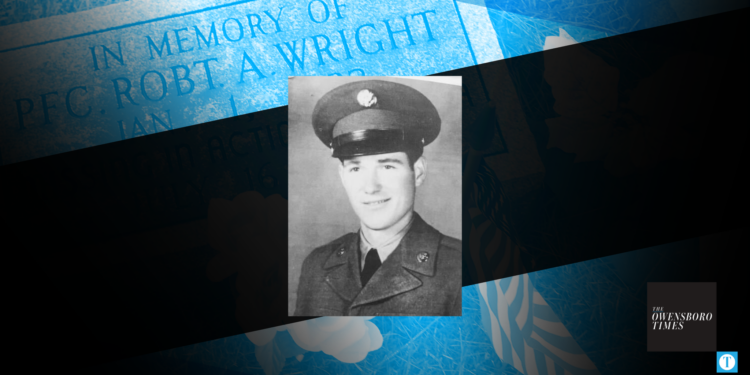 Pvt. Robert Arle Wright went Missing in Action during the Korean War in 1950 at the age of 17. Seventy-two years later, his remains have been found and will be brought home to Whitesville. | Photo provided

Pvt. Robert Arle Wright’s remains are finally returning home and will be buried in Whitesville next week, 72 years after he went Missing in Action during the Korean War at the age of 17. The community is invited to participate in an event to honor Wright’s return on Dec. 6, or attend the visitation or funeral in the days following.

“I want to try to get as many people as I can to come and line up the roads to welcome him whenever they bring him back,” said Jessie Hettinger, one of Wright’s nieces.

Wright’s remains will arrive at 5 p.m. Dec. 6 at Cecil Funeral Home (10153 KY 54) in Whitesville. Hettinger said the mayor will say a few words, and the color guard will move the remains from the hearse to the funeral home.

Hettinger previously said her grandmother had a memorial headstone made for Wright “to make sure if they ever found him they’d have a place to bring him back.” It lists Wright’s birth date and the date he went MIA.

Wright attended St. Mary’s High School in Whitesville before entering the service at 17 years old in 1949. He set sail for the war in April 1950.

Private First Class Wright was a member of Company C, 1st Battalion, 19th Infantry Regiment, 24th Infantry Division. He was listed as Missing in Action while fighting the enemy in South Korea on July 16, 1950. He was presumed dead on Dec. 31, 1953.

On the evening of July 15, 1950, the U.S. Army’s 19th Infantry Regiment held defensive positions along the south bank of the Kum River. As dusk approached, North Korean People’s Army (NKPA) tanks appeared on the opposite shore and began firing on the U.S. positions. Although U.S. troops repulsed the attacks that evening, the next morning the NKPA crossed the river and launched a major attack against the 19th Regiment. As the regiment began withdrawing south to Taejon, the North Koreans pushed deep into their defensive lines and set up a roadblock en route to Taejon. When retreating American convoys could not break through the roadblock, soldiers were forced to leave the road and attempt to make their way in small groups across the countryside. Of the 900 soldiers in the 19th Infantry when the Battle of Kum River started, only 434 made it to friendly lines.

The agency’s website shows that Wright’s status changed to “accounted for” on Aug. 15, 2022. The agency updates Wright’s profile to read, in part:

Due to the fighting, his body could not be recovered at that time, and there was never any evidence that he was a prisoner of war. After regaining control of Taejon in the fall of 1950, the Army began recovering remains from the area. Those that could not be identified were eventually buried at the National Memorial Cemetery of the Pacific (NMCP) in Honolulu, Hawaii. In 2018, the DPAA proposed a plan to disinter 652 Korean War Unknowns from the NMCP. One set of these remains was disinterred in 2019 and sent to a laboratory for further study. Laboratory analysis and the totality of the circumstantial evidence available established these remains as those of PFC Wright.

The new forensic analysis led to two DNA matches for Wright to help confirm his identity — one match was with Hettinger’s mother, and the other was with her aunt.

The family was notified in August, and they’ve been waiting since then for all the arrangements to be finalized for Wright’s return home. Hettinger said there are more than 100 family members who may try to attend the services.