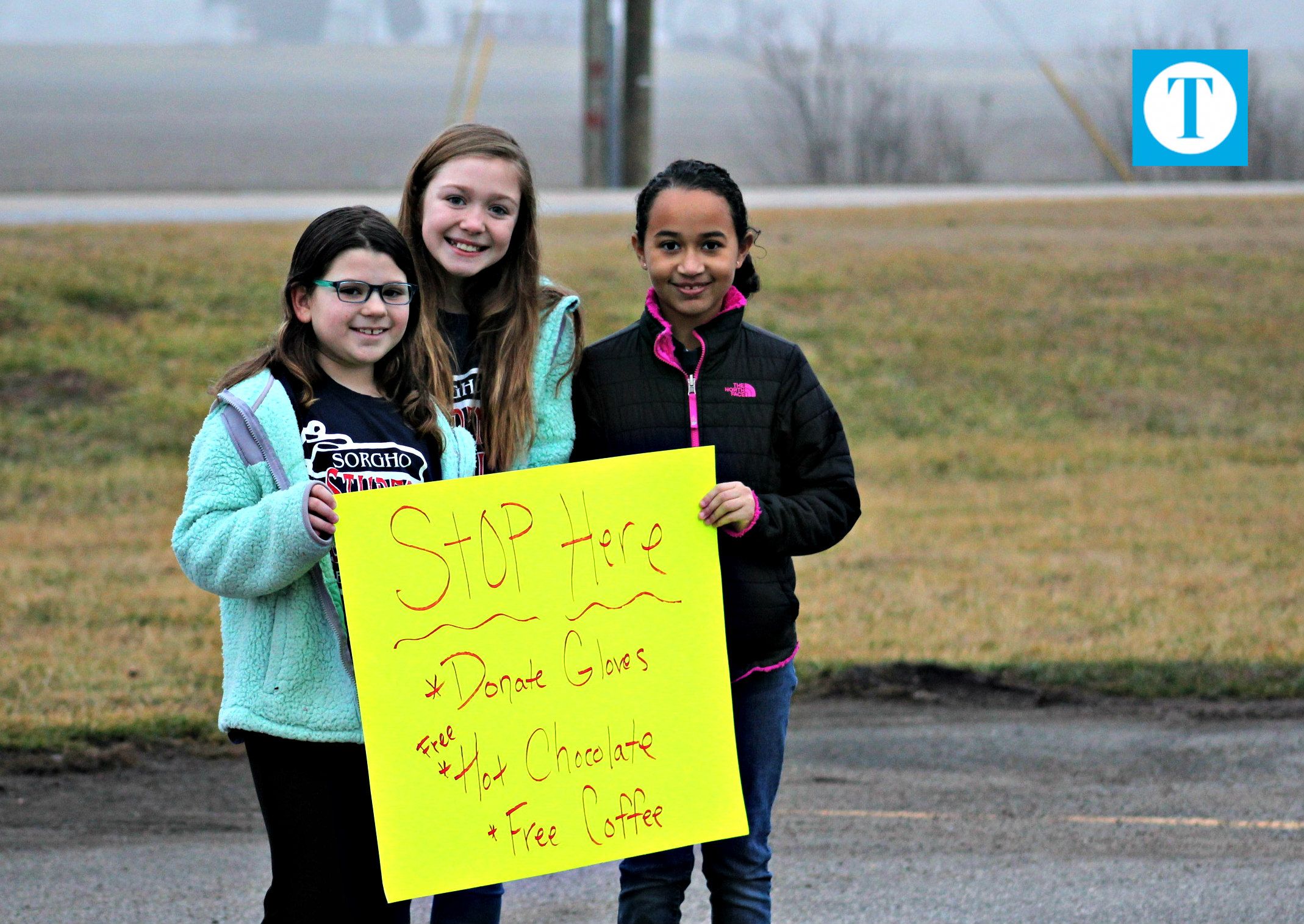 A cup of hot cocoa and a pair of warm fuzzy gloves are the perfect compliment to a winter morning. Such was the theme at Sorgho Elementary School on Tuesday morning as approximately 24 fourth and fifth-grade students handed cups of coffee and cocoa to drivers and passengers exiting the drop-off line. The Student Lighthouse Team members also graciously accepted donations of gloves and hand warmers and placed them in the quickly growing pile behind their cocoa station.

The event “Operation Warm Hands” was created after Sorgho Elementary School Cafeteria Manager Heather Haynes discovered she had been named one of three finalists in the national School Nutrition Association (SNA) 2019 Legislation Action Conference video contest. Haynes believed, if she won the contest, the opportunity to travel to the national conference in Washington, D.C. would also present her with an opportunity to give back to others.

“When I heard I was a finalist, my immediate thought was that, if this really happens, I have to give back somehow,” Haynes said. “I thought, if I was being given something, it didn’t feel right going on this trip and not doing something in return.”

In December, Haynes was notified that she indeed had won the video contest and the trip to Washington, D.C., traveling with five others. Having already brainstormed ways to give back to the D.C. community, it did not take long for her idea to take shape.

“We knew when we were going there it would be cold,” Haynes said, adding that she and the other ladies attending discussed the clothes they would need to pack given the anticipated cold temperatures.

Haynes said the conversation then turned from the cafeteria managers keeping warm to the extensive homeless population in D.C. Then Haynes decided to begin aiming her focus back home.

“There are over 600 people in Owensboro homeless as well,” Haynes said. “Why not help people at home — where it should all start — and then continue it in D.C.?”

Haynes started by sending a flyer to the Daviess County Public Schools district and then reaching out to school families, friends, businesses and sponsors with an initial goal of collecting 1,000 hand warmers and pairs of gloves. Before the official date of “Operation Warm Hands” arrived, which was rescheduled due to weather, Haynes had received over 2,000 of each, including a very generous donation of over 1,600 hand warmers from Whittaker Guns.

Tuesday morning, businesses and individuals, including Tamarack Elementary School and Jagoe Homes, delivered boxes and full bags of gloves to the SES parking lot as individual families handed hand warmer packets out of their windows. The grand total after Tuesday’s contributions was 3,192 items.

“A local lady even called and donated $500,” Haynes said. “We are going to use half of that to help heat the homes of some of our students and the other half to buy more gloves.”

AdvancePierre Foods has agreed to donate over 300 sandwiches for Haynes and her team to hand out in Washington, D.C.

Since the team of six cafeteria managers from SES, Daviess County Middle School, College View Middle School, Tamarack Elementary School and Owensboro Public Schools will be traveling by plane to the nation’s capital, there was a concern about how all of these items would be transported.

“We’ve had a couple of people offer to donate luggage,” Haynes said, adding that once they hand out the necessary items, the luggage could then be donated to the shelter where the group will be volunteering.

The SNA 2019 Legislation Action Conference conference is scheduled from Feb. 24-26 and will allow the group the opportunity to sightsee, serve at a local shelter, hand out the many items they have collected
and speak before Congress about issues concerning national public policy efforts supporting school nutrition programs.

Fifth-grade teacher Barbi Morris-Irby, a first-year teacher at SES and co-sponsor of the Student Lighthouse team with Katie Warren, said the students have written letters based on topics they selected from five or six issues that will be presented at the conference. Haynes will read and submit these letters to elected officials in Washington, D.C.

Morris-Irby said the topics ranged from healthy snacks and changes in free and reduced lunch to having enough lunchtime to eat. She said Rep. Guthrie’s visit to the school Monday and the conference in Washington, D.C. were both unique opportunities for the students’ voices to be heard.

“The students used that opportunity,” Morris-Irby said. “How often do you get somebody here in front of you?’

Morris-Irby was not just impressed by the stance her students took in voicing the importance of the new changes in school nutrition, she was also impressed by the outpouring of support from her school.

“This is one amazing place,” Morris-Irby said. “They do more for people and for each other than I’ve ever seen.”