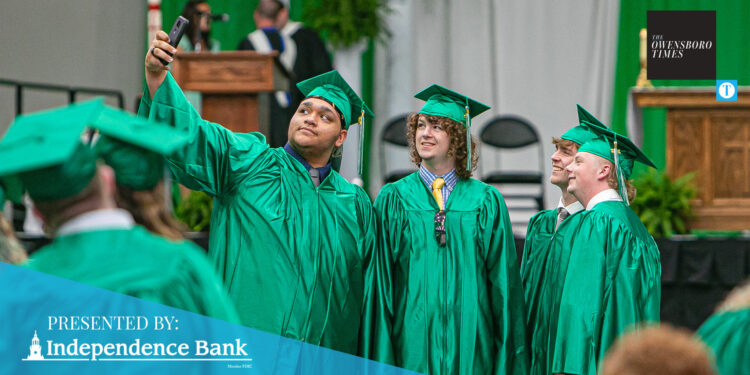 Owensboro Catholic High School’s Class of 2022 was the smallest group of graduates in Principal Gates Settle’s 11 years, but he said they were mighty.

“They have the highest ACT scores in OCHS history, and the Marching Aces won the state finals for the first time,” he said.

He also recognizes this class’ resiliency and appreciation.

“They are special … the way they have moved through COVID and allowed in-person instruction to continue … they met all challenges and expectations,” Settle said. “They will always be connected as the COVID kids.”

Settle said their appreciation for what they did get to experience in their last year has been noticed by the faculty, including what he called “something as simple” as a Homecoming dance.

Settle reminded the class to always give great effort and have a good attitude.

He also doesn’t want them to forget where they came from and to always remember their faith.

For Owensboro Catholic senior Trey Roberts, the sky is now literally the limit. This past week, he reached one of his goals – completing his private pilot’s license before graduating high school.

Living near the airport, Roberts said he was always curious about aviation. Becoming a pilot was always something Roberts was interested in, but when his father — who also wants to get his license — took Trey to the regional airport in 2017, pointed to a plane and told him it was now theirs, the plan developed more concretely.

After getting the plane “extra safe,” according to Roberts, and looking at the timeline he would need to follow to make it happen, he began flying with some of his family’s friends who had their pilot licenses and observing what they did.

Roberts said he was fortunate to have a family and friends who encouraged him to pursue this dream, as it is expensive as well as time-consuming.

In 2020, he flew his first flight with an instructor to make sure this was the path he wanted to take. He began working with Ronnie Bunn at Eagle Flight Academy in Owensboro and had to log several hours in the air, along with ground work.

Then came the written test, which Roberts said asks any question related to airspace and general aviation.

“I passed the written and the solo and then the practical,” Roberts said.

The practical took place on May 21, and Roberts said he was nervous for the oral portion of the test because the length of it can vary by the examiner.

“It is an FAA [Federal Aviation Administration] official, and he can ask any questions based on scenarios and procedures – anything that is a requirement of the pilot,” Roberts said.

Then it was time for the flight test with the examiner. He performed the necessary pre-flight checklist and then they took off. Roberts showed various maneuvers that were asked of him by the official.

“It was my best flight ever,” Roberts said. “I don’t know if it was because I was nervous or what, but it was great.”

Roberts said that while flying has always been a dream of his, he is most excited about joining his father’s companies, including his asphalt company, Roberts’ Asphalt.

“I also dreamed of working alongside him and expanding his businesses,” Roberts said. “I remember being in second or third grade and painting lines in a parking lot.”

For the previous month, Roberts would wake around 5 a.m. to get in the air before 6 a.m. Around 8 a.m. he would work for the family business, stopping around 10 a.m. to attend Owensboro Community and Technical College online businesses classes. Two hours later, Roberts would be in class at OCHS and then, after the school day ended, he could be found in the air again or back in the office finishing work.

“I needed to learn as much as I could before summer,” he said.

Much of his spring was spent rescheduling – either customers who needed work done or his air training due to weather.

Flying will continue to be a hobby for Roberts, and he is hoping that while he is working with his dad learning, he can also share his flying knowledge with his dad and that he will get his license as well.

This week, Roberts will begin as a full-time employee at his family business, and while he said that reality hasn’t set in yet, he knows he has one very important trip to take next week with some extra-special passengers.

“My parents paid for the instruction and the plane,” he said. “My payback, they said, is to fly them someplace to eat.”

Robert’s head may be in the clouds, but his feet seem firmly planted on the ground.