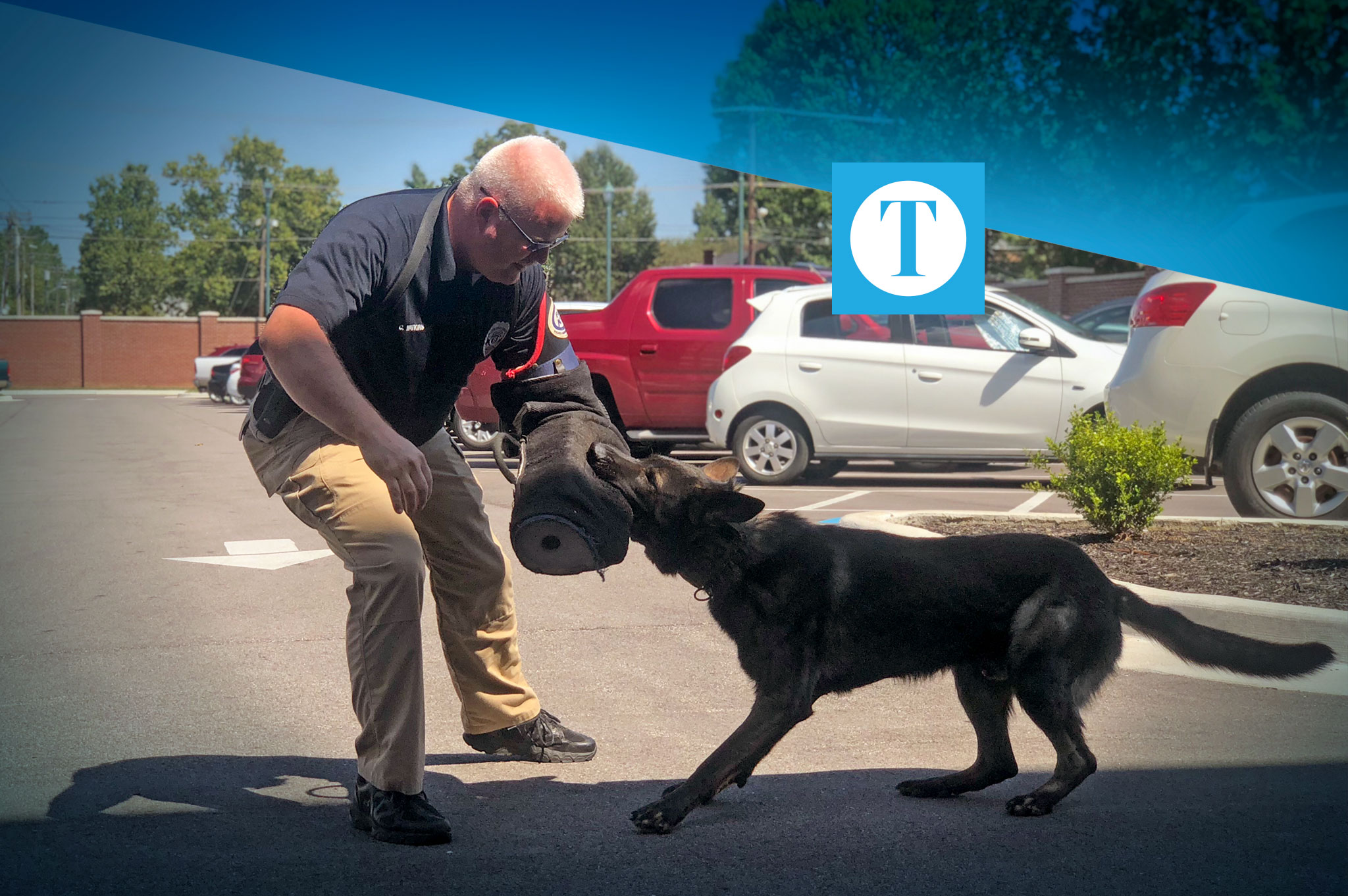 The trained German shepherds operating within Owensboro Police Department’s K-9 unit are now able to face dangerous situations with an extra layer of protection, thanks to Independence Bank’s Random Acts of Kindness group.

The organization donated funds to both the OPD and Daviess County Sheriff’s Department as part of a donation offered to programs across the area. Independence Bank’s donation paid for three bullet-resistant, knife-resistant vests (around $1,200 each) for the three dogs serving on OPD’s K-9 unit, and two bite-sleeves to go toward DCSD’s unit.

“These dogs are with us 24/7,” said OPD’s Officer Watkins. “They’re integrated into our families.”

Watkins said the dogs are trained to protect the OPD officers but can tell the difference between working hours with the officer and leisure time spent at the officer’s residence.

“As soon as I put him in the truck, it’s work time,” said Watkins.

Kevin Kabalen, the security officer at Independence Bank, said September was National Service Animal Awareness month, and the bank’s contribution was to provide the highly-skilled dogs with the right attire.

“The police dogs have no vests [at OPD],” said Kabalen. “Daviess County already had vests, and they needed bite-sleeves,” he explained.

OPD’s Officer Morgan said German shepherds are used at OPD because they’re the most versatile dogs for the job.

“They aren’t the best in all things, but they are good at everything,” said Morgan. He added that it takes a dog in the K-9 unit around 60 repetitions to gain the muscle memory needed to serve as a narcotics, patrol, or bomb dog. Most OPD dogs serve a dual purpose, trained to react in at least two of the areas.

OPD officers who are assigned a dog train them from young ages.

“It’s a big commitment,” said Watkins. “We’re with our dogs more than our families.”

Officer Morgan said the vests will be used on a “tactical” basis because the German shepherds have high body temperatures. While not used daily, the vests will be used in emergency situations — when the dogs aid the emergency response team, for example. The vests will also be utilized during shooting threats. The K-9 units at the scene of barricade where a shooter might be involved — or even in the possibility of a school shooting — are considered environments where the vest would offer the dog the much-needed protection.

“If you can imagine a school shooting here, if one of us responded first, they [the dogs] would be used as a distraction tool as well,” said Morgan. “They’d take the shooter’s attention, wearing the vest, for one second. It could give us one or two seconds to take a shooter down.”

Watkins said the staff at OPD is very “pro K-9” and grateful for the vests given to his department. “We couldn’t ask for anything better,” he said.

All three K-9 Unit officers agreed that their dogs love the work they do.

“If they don’t do this job, they kind of give up on life,” Morgan said. “They just want to work. That’s what they’re bred to do. That’s why we work them so much. They spring to life when they’re working. That’s the difference between a working dog and a non-working dog.”

Once a dog retires from the K-9 unit, he or she usually stays at the home of their training officer for the remainder of their life. Officer Phillips said working with the K-9 unit develops a bond between a dog and an officer that can’t exactly be put into words.

“It’s different when you’re constantly in life-or-death situations with your dog,” said Phillips. “Or when your dog has saved your life. It’s hard to explain that feeling.”

“With K-9s, we totally eliminate everybody else because the dog is who I trust,” said Watkins. “At the end of the day, though, they’re dogs. They like to play and have fun.”