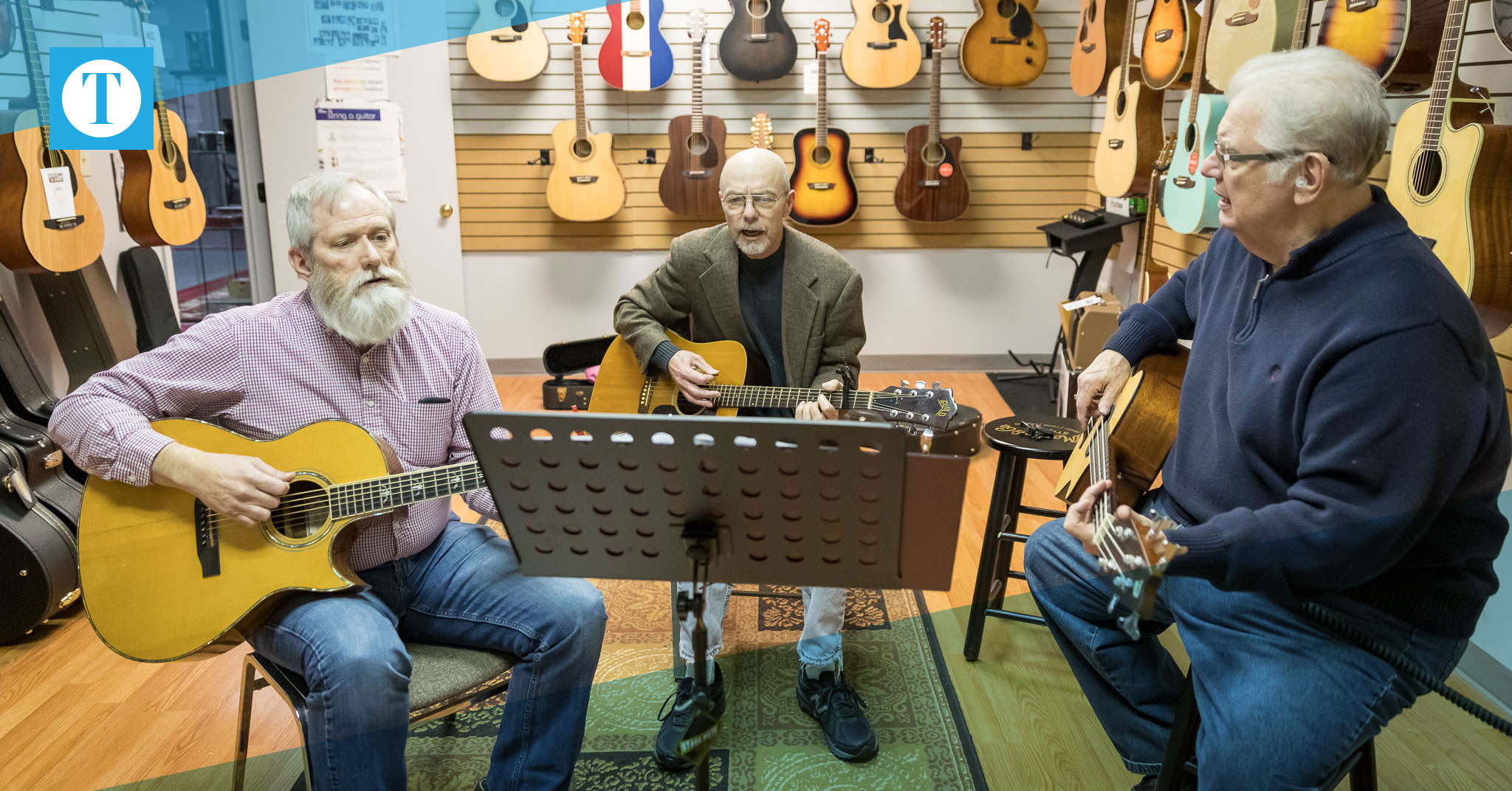 Local musicians Mark Gordon, Bob Meacham, and Gordy Wilcher have been playing music around Owensboro – separately and together — since the 1960s. From the late 1990s until about 2010, the three were part of the locally known and loved band The Velvet Bombers. Now, the three longtime friends are performing as the V-bombs, an acoustic trio that has started making the rounds of porch parties and restaurant patios.

The Velvet Bombers, whose name came from the local American Legion baseball team sponsored by the Velvet Milk Company, were originally a studio band that morphed into a popular dance band that played mostly chart-topping songs from the second half of the 20th century at Friday after 5, weddings and regional events. Gordon, Wilcher, and the late Bob Blackford were mainstays in the “Bombers,” as other members came and went during the band’s nearly twenty year run. One of the last people to join that band was Bob Meacham, who had been a founding member of the Arnold Chin band, another successful local group.

The Velvet Bombers “met with a series of unfortunate events” and quit playing around 2010, according to Gordon.

“When you’ve spent most of your life playing music, and you get that energy from the crowd, you wonder if you’ll get it back,” Wilcher says. “I needed the emotional release or performing to regain my energy.”

Bob Meacham, who calls himself the “young pup” of the group at age 64, says, “Music is the love of my life, and I just want to play. It’s more fun with other musicians.”

Gordon, who plays guitar along with Meacham, said he told his bandmates when they started that his dream for the group was to be “an acoustic trio that makes people get up and dance.” That happened when they played at the Blue Heron Winery in Cannelton this fall.

With Wilcher on bass and all three on vocals, the material the V Bombs play is suited to their instrumental setup and differs from the tunes the Velvet Bombers did, which relied heavily on keys and drums. Wilcher jokes that Mark Gordon suggests “weird” music that somehow works.

Meacham says Gordon suggested playing the horn heavy “Hold On, I’m Comin’” by Sam and Dave, but that somehow the trio made is work with vocal harmonies, which are Meacham’s favorite aspect of the V-Bombs.

“We always make sure one of us is carrying a pistol, in case a harmonica player shows up,” he jokes, then quickly adds, “Bob and Gordy are always threatening to shut off my microphone.”

The V-Bombs look forward to continuing to make people get up and dance in 2019. They’ll start by playing Jan. 5, 2019 at the Pour Haus in Tell City.