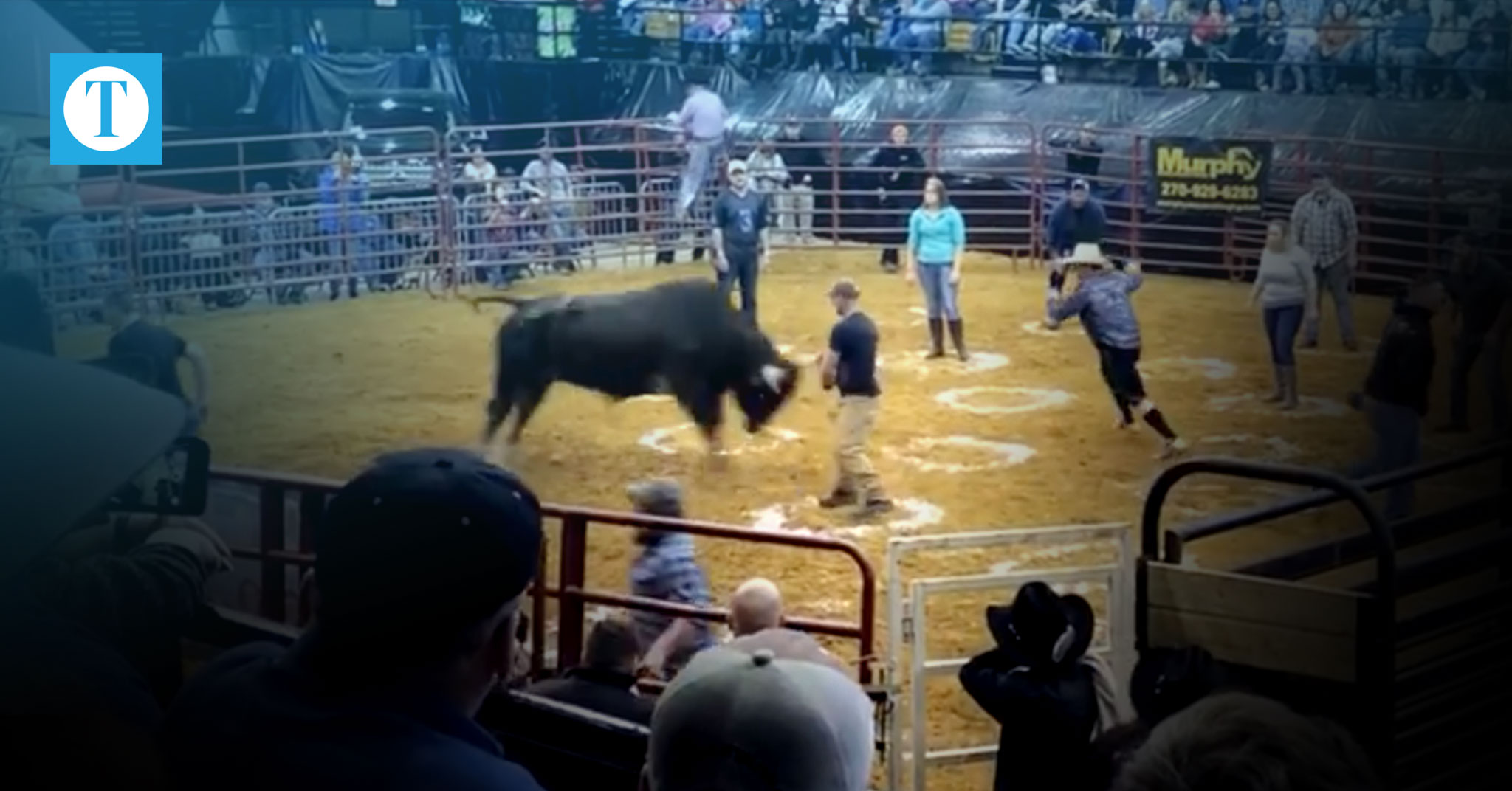 Spectators attending the 2019 “Bull Bash!” held at the Owensboro Sportscenter Saturday night witnessed an event that surprised and shocked many as two men were thrown into the air by a bull during a game titled “Cowboy Pinball.” Another man was seen being aggressively pinned against a wall during the event by the same bull.

According to witnesses, the “Cowboy Pinball” game required participants to stand in circles that were drawn for each of the 23 volunteers who signed a waiver beforehand, which warned them of potential injuries, accidents and even death, according to officials who run the event. SEBRA — the company who runs the Bull Bash across the country — refused to share a copy of the waiver with Owensboro Times when one was requested.

Laura Alexander, general manager of the Owensboro Convention Center and Owensboro Sportscenter, said the Sportscenter staff was unaware that the event’s producers were playing this game until it was announced Saturday night.

“We have spoken with the producers of the event and asked them not to include this game in today’s show in light of yesterday’s event,” said Alexander, who confirmed that the “Cowboy Pinball” would not happen at Sunday’s kids-focused bull event. “I have been told that this game is common among rodeo shows.”

Alexander said the producers of Bull Bash held their event with the Sportscenter last year and this particular game was not part of the show. According to Alexander, the company that rented the Sportscenter for this weekend’s rodeo event secured two stock providers and announcers.

“So it’s different people altogether that put it on,” said Alexander, who added that they are attempting to reach media contact for the company.

“Everyone who left the show last year loved it and was excited about it returning this year,” Alexander said.

Bull rider Matt Allgood said a $100 bill was tied to the bull’s flank and connected to a belt around the bull’s waist. The first person to successfully grab the $100 bill without stepping out of their circle was declared the winner. However, things didn’t go as planned during the course of the events that followed.

According to video, the second bull of the game was let out of its pen and charged straight toward a participant who was tossed and flipped through the air, landing in the dirt behind the bull.

As game participants either stood in surprise or ran to take cover, the bull charged a second participant, who was also thrown significantly high into the air. Video shows the participant landing in the dirt but not getting up afterward. The participant was quickly moved to the side by staff members from SEBRA, the officials who run the Bull Bash.

Meanwhile, the bull began charging a third participant in an aggressive manner. The bull pinned the participant to the wall, which is typically used to climb over to get to safety. However, according to the video, the participant struggled to get over the wall initially, as the bull continually pinned him against the wall before the participant was able to safely escape the arena.

A spectator, who attended the event with his child, said this year’s event was very similar to last year’s until he witnessed the “Cowboy Pinball” game.

“This was the second time we’ve been to the Bull Bash. Everything was very similar, but we’d gone to ‘Kids Day’ last year,” he said. “When I saw what happened [during Cowboy Pinball] I thought, ‘Surely this isn’t normal.’”

The spectator later looked online to see if an incident like Saturday night’s had happened during previous Bull Bash events, and he couldn’t find any video that showed an outcome like the one he had witnessed.

“Online, there was no other like that,” he said. “When they announced the game, at first we thought, ‘Maybe this is something comedic.’ But it turned out to be serious.”

“A hush came across the gym,” the spectator said. “This did not seem normal for them [the producers of the event]. I never saw the [second] man [regain consciousness]. They were trying to decide who should get the $100 prize, and the people who were still left on the floor said they didn’t want it. They said to give it to the guy who was injured.”

“I’m sure it won’t happen again,” he said of Owensboro having the “Cowboy Pinball” game at another Bull Bash event.

Two SEBRA employees confirmed that the second participant was awake and alert after the incident, before seeking medical treatment. Owensboro Times has inquired to the current condition of both participants with no response at this time.