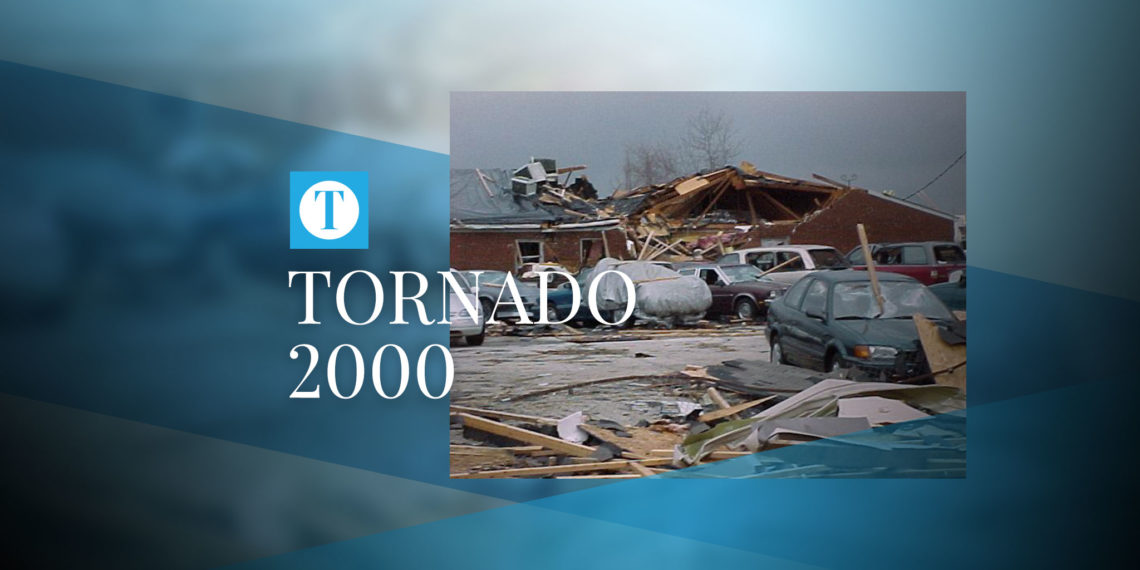 Friday marked 20 years since an F3 tornado swept across a 7-mile stretch of Owensboro. Officials from across Owensboro and Daviess County met to commemorate the weather event that greatly affected the community.

Landmarks like Apollo High School, Kentucky Wesleyan College and what was then Winn-Dixie were devastated by the tornado. Officials say a total of 1,200 homes and businesses were affected, adding up to more than $70 million of damage. The 180-miles per hour winds destroyed more than 100 homes and another 573 sustained severe damage. Officials say it is rare that an F3 tornado did not cause any fatalities and only 18 were injured.

Daviess County Emergency Management Director Andy Ball said it was important to remember the event, which is why he organized Friday’s commemoration. Ball said while talking with community members, one constant he heard from stories of that day was fear.

“We don’t come together though today to relive that fear,” he said. “We celebrate life and how a community came together.”

Former Judge-Executive Reid Haire spoke at the commemoration, pointing out the resiliency of the Owensboro community. He recalled hundreds of volunteers, some from out of town and state, that showed up to help in the wake of the tornado. City and County workers and emergency personnel worked around the clock to restore the community.

“You can drive through that area [where the tornado touched down] and except for the stump of a tree there is no sign that any of the devastation took place,” Haire said.

Former City Manager Ron Payne said the 2000 tornado was the toughest thing he dealt with in his tenure in the position.

At a time when the world was worried about Y2K, Payne said the last thing on the City’s radar was a tornado.

“Who would have thought in Owensboro, Kentucky in January we would have a tornado? We had planned for months for an event that became a non-event,” Payne said of Y2K.

He recognized the City police and fire departments, who he said worked tirelessly to remove the debris once it was determined that no one had died from the storm. Payne said officials devised a plan to collect all debris at the Owensboro Sportscenter, which amassed quickly. City officials then hired a consulting company to burn the debris at MidAmerica Airpark.

NWS Paducah Lead Meteorologist Rick Shanklin explained the details of the tornado to those in attendance at the commemoration. In his 36 years in the weather business, Shanklin said the Owensboro tornado of 2000 is one that stands out in his career.

“This propelled this community to become the first StormReady community between Chicago and Atlanta and now there are hundreds,” Shanklin said.