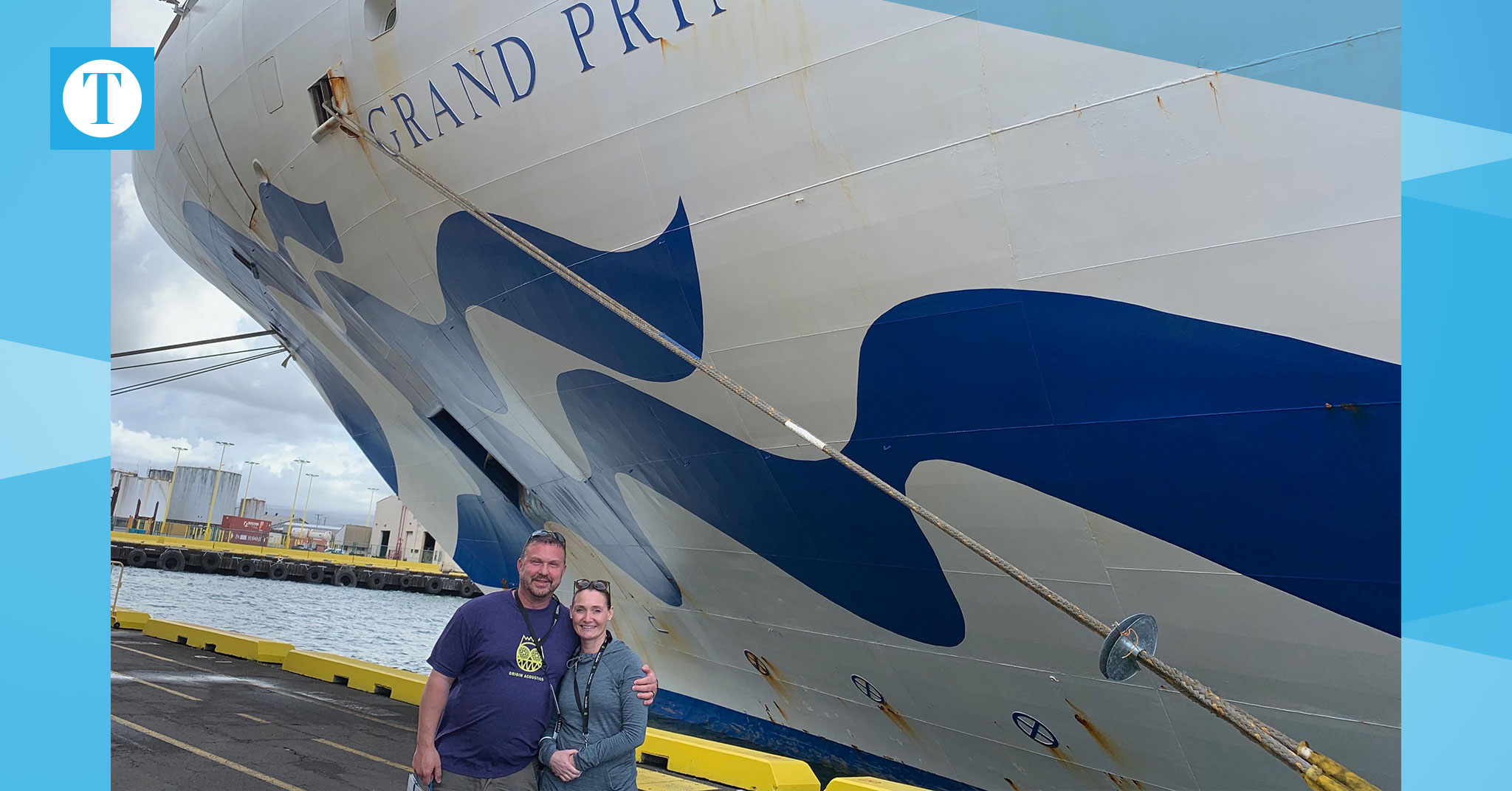 Two Owensboro residents have been quarantined on the Grand Princess cruise ship since last Wednesday. Chris and Nikki Hall spoke with Owensboro Times about their experience, their concerns and, despite everything they’ve gone through, their wholehearted appreciation for others during their now three-week venture at sea.

More than 20 people, including 19 crew members and two passengers, have tested positive for COVID-19 on the Grand Princess cruise ship the Halls are currently aboard. Since then, the couple has faced a lot of uncertainty as to what comes next for them and the 2,400 others around them.

“We’ve been on this ship since Feb. 21, so almost three weeks,” Nikki said Tuesday night. “The communication has been really bad. The CDC and the California governor are in complete control of how everything is handled, so whatever they need us to know, they tell the Princess Cruise Line, and then that information is given to us.”

What was supposed to be a two-week trip to Hawaii turned a corner when, on March 4, those onboard the ship were told they couldn’t dock in California and had to remain at sea. Nikki said the governor of California, Gavin Newsom, refused to allow the Grand Princess to dock at the state border. And so, the ship began “just circling” the Pacific Ocean for days on end, about 40 miles off the California coast, Chris said.

Vice President Mike Pence said last week that among the more than 3,500 people aboard the ship, 21 were infected with the disease.

According to Nikki, a passenger aboard the cruise prior to their trip became sick after his cruise was well underway. After approaching medics on board, he was tested for the coronavirus and received a positive diagnosis.

That same passenger, a man in his 70s with a preexisting condition, eventually died due to complications from COVID-19, Nikki said. He was taken off the ship on Feb. 21, the same day the Halls’ cruise was set to take off.

When crew members aboard the Grand Princess began showing symptoms, the CDC was notified, and the crew was quarantined. Those on board were supposed to dock in Mexico for four hours on the way home from Hawaii, but the Mexican government prevented that from happening, Nikki said. The CDC told the cruise line to come back to America instead.

Since Monday afternoon, the Halls and thousands of others have been docked in Oakland, Calif. On the outskirts of the ship are individuals dressed in hazmat suits, military personnel and ambulances. People onboard are finally being allowed to leave the boat but, so far, their number hasn’t been called to evacuate.

“The first to leave was supposed to be those who need emergency services, and they’re taken to a local hospital. Then the next priority group is residents of California, and they’ve been taken to military bases in California and quarantined for 14 days. Then it’s the American citizens who aren’t California residents. Then it’s foreigners from countries outside America,” Nikki said. “We’re waiting on tags to be delivered to our room because that’s how you know you’re going to leave that day.”

After receiving their tags, the couple will have no idea where they’ll be taken next. Neither does anyone else onboard. They have also never once been tested for COVID-19, even though they were told that everyone on board would be tested.

“I don’t want to carry it back with me,” Nikki said. “Other people have been asked about their health, but no one has contacted us or come to our room to interview us. Maybe it’s because we’re younger than a lot of the people on board.”

The only information the Halls have received about where they go next has come from an online forum, where those who’ve already been evacuated have shared information with the others. Nikki said evacuees are given color-coded pieces of tape and taken away from the dock site on buses, but that they’re never told where they’re headed until they’ve arrived.

“It could be a military base in either Georgia or Texas, where we’ll be quarantined for 14 days,” she said. “But we have no idea.”

Despite these uncertainties, Nikki and Chris said the Princess Cruise Line has been extremely helpful and understanding, bringing them meals three times a day and risking their health to make sure each and every passenger is given the ultimate treatment. Even more, each passenger has been refunded for the cruise and every excursion taken during the entire trip.

“Princess Cruise Lines has stepped up, but the CDC and California governor aren’t communicating that well,” Chris said.

The Halls said they are doing well physically and mentally, adding that they were lucky enough to have a balcony attached to their cabin, whereas others were confined to inner cabins without windows.

“They’ve started rotations for people to go outside on the deck, but we’re not worried about it,” she said. “We don’t need it, and there’s no sense in taking away [that time outside] from someone else.”

Though the experience has been rough, a few not-so-negative things have come from it. NBC will be featuring the family on a segment that should air Saturday night, and news crews from the station will be in Owensboro Wednesday morning to interview the couple’s daughter, Ava, and other members of the family who’ve been missing Nikki and Chris.

“The hardest part for me was not being there for [my daughter],” Nikki said. “As soon as we had to tell her [we were being quarantined], it was right before her first performance with TWO (Theatre Workshop of Owensboro). Everyone at TWO has been messaging me and sending me videos. We truly have a village of people back home that have taken this on with us. For them to embrace Ava like they have has meant the most to us.”

The Owensboro Health coronavirus hotline is available 24/7 by calling 877-888-6647. Call the hotline before seeking in-person care. More information from OH can be found here.

For the latest information and data on COVID-19 in Kentucky visit kycovid19.ky.gov or dial the Kentucky state hotline at 800-722-5725.

For the latest health guidelines and resources from the CDC, visit their website here.