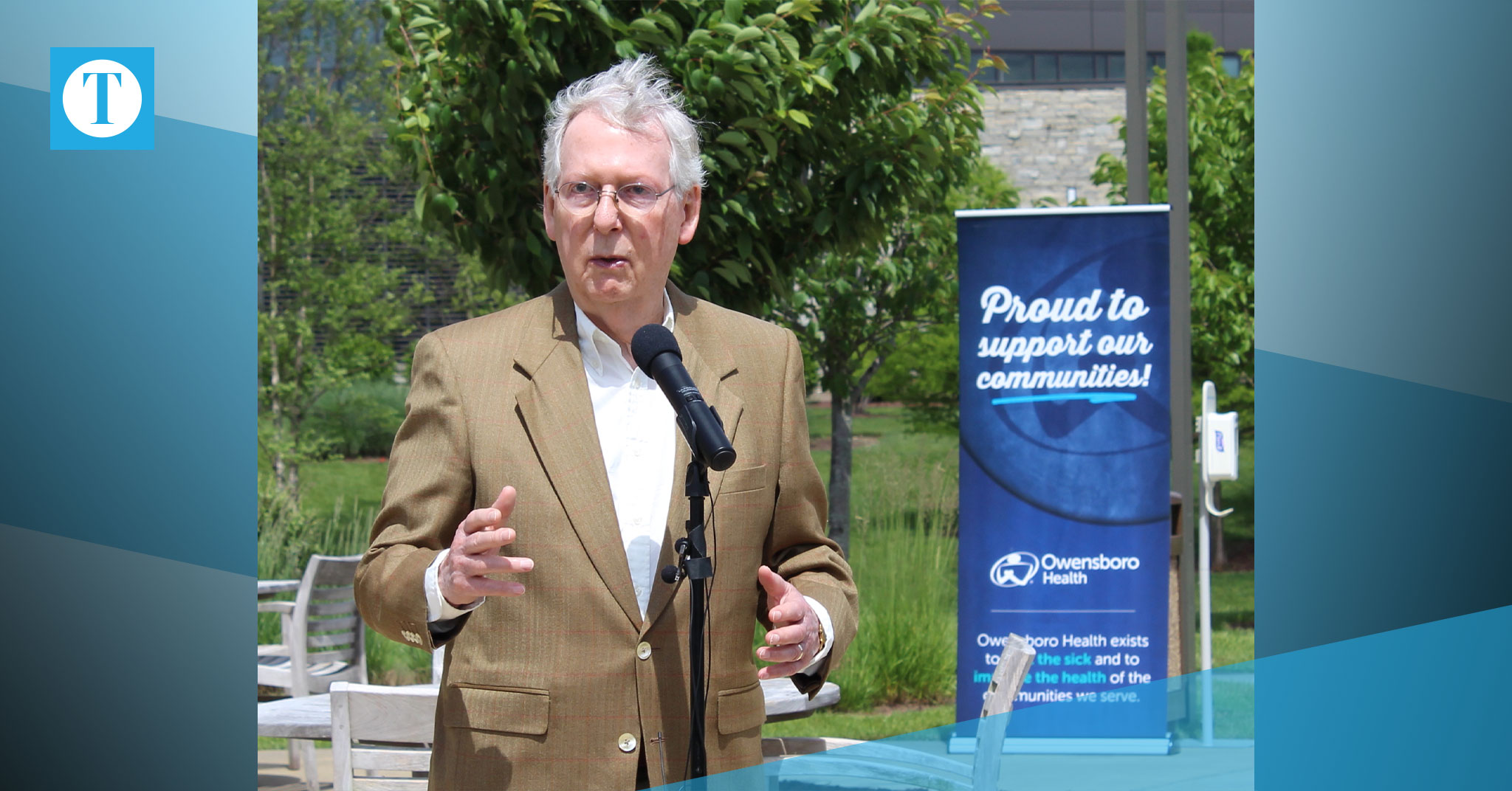 U.S. Senate Majority Leader Mitch McConnell visited Owensboro Health Regional Hospital on Thursday to announce a $65,828 federal grant that will go toward the local community and law enforcement, first responders and medical personnel. McConnell also shared his top priorities in reopening the economy and the possibility of passing legislation for a second stimulus relief package.

The roughly $65,000 funding package is being distributed by the U.S. Department of Justice (DOJ) Coronavirus Emergency Supplemental Funding Program, which allows local governments like Owensboro to support efforts to control the spread of coronavirus.

The funding can be used for overtime pay for first responders, equipment for law enforcement and medical professionals, personal protection equipment and other coronavirus-related priorities.

To date, organizations in Owensboro have received nearly $4.6 million as a result of McConnell’s CARES Act, and Owensboro Health another $17 million. On Thursday, McConnell commended the doctors and nurses of OHRH for their continued dedication to patients and the community during this months-long pandemic.

“Every Kentuckian has been impacted by the coronavirus crisis, and as Senate Majority Leader, I’m constantly working to make sure we have resources to respond,” he said. “I’m grateful to Kentucky first responders and strong local officials like Mayor Watson who are leading the effort to beat this virus and get back to normal.”

Getting back to normal was a major topic at Thursday’s press conference and McConnell said it would be a few more weeks until the nation could begin to measure the economic restoration that comes with reopening the economy.

“This was a cataclysmic event — not just for healthcare, but for the economy,” he said. “Remember, in February we had the best economy in 50 years. Two months later, we had an economy that looked like the Great Depression — in two months.”

McConnell said most people were comfortable with getting back to normal, and that one of the most important aspects in doing so would be having children return to school.

“K-12 and college-age kids need to be back in school; there are consequences for being cooped up at home,” he said. “You’ve seen the results of these studies indicating suicide is up, spousal abuse is up, child abuse is up. There are health-related consequences as well. So, clearly, that needs to come to an end.”

McConnell said job security was his other major focus in opening the economy, saying the nation should be focusing on saving as many jobs as possible.

If Congress were to pass another bill to aid in supporting the nation during this economic recession, McConnell said it wouldn’t be feasible to support one that costs the Federal government as much as it did the first time around.

“It won’t be the same as last time,” he said. “They threw everything but the kitchen sink in there.”

McConnell said it was too soon to determine an acceptable amount for another stimulus package, but he said that decision would be made in a month’s time.

The country would be left with an enormous amount of debt, he said, no matter how much funding the House and Senate decide to allocate the second time around. McConnell noted that the federal Personal Protection Program — so far, utilized by over 45,000 Kentucky small businesses, he said — was more of a grant from the federal government than a loan because it didn’t have to be paid back.

“It’s a fact that we’re going to be left with a mound of debt,” he said. “This will hang like a dark cloud over our country and our future. We need to be careful. We’re playing with fire here. We haven’t had this big of a debt since World War II.”