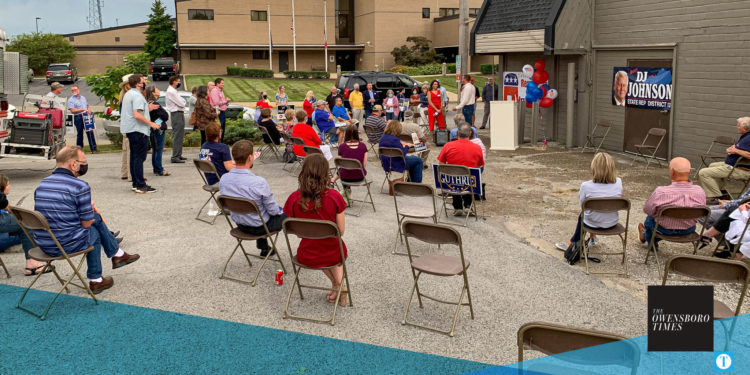 About 60 people showed up Tuesday evening for the grand opening of the new headquarters for Daviess County Republicans.

The temporary headquarters is located at 215 E. 9th St. across from Owensboro Police Department.

“We haven’t had a location in a couple of years,” said Jessica Casebolt, Party Chair for Daviess County Republicans. “We’ve worked really hard to get this one open. People have been adamant. They have been blowing up my phone with calls, they have desperately wanted this to get open to try and get some activity.

“There are so many supporters and they feel like they haven’t been able to get signs. They really just want to show their support, so we wanted to get this open.”

Casebolt said their committee worked together to search for available spaces from now until Election Day.

“This place was perfect for us,” she said. “It has plenty of space and we’re able to accommodate a lot of people, especially outside like we did tonight — COVID-friendly.”

“This should be a hub of volunteer activity, for folks to get together before they go out into the community and knock on doors,” she said. :We can set up for different candidates and their volunteers to come and make phone calls. Kind of a one-stop shop if you want to be involved in Republican politics and these campaigns this year — this is where you come to do it.