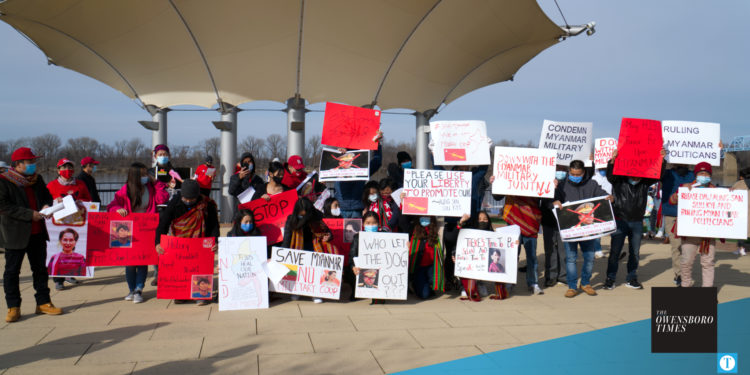 ‘Please use your liberty to promote ours’

Dozens of protesters comprising members of the local Burmese community gathered recently in Smothers Park to speak out against a military coup in the country of Myanmar, also known as Burma.

According to international news sources, the coup in Myanmar occurred on Feb. 1 when Aung San Suu Kyi, the country’s state counsellor and de facto leader, was detained and allegedly arrested by military forces. Suu Kyi’s party, the National League for Democracy (NLD), won 83% of the parliament seats in a November election but the military-backed Union Solidarity and Development Party (USDP) rejected those results based on claims of widespread voter fraud.

Owensboro resident Win Khine, who helped organize Saturday’s local protest, said they are demanding the 2020 Myanmar election be recognized and for the leaders to be released. Win Khine said there were some issues with the election process but they were “small problems” and most people voted for the National League for Democracy.

“Their accusations [of voter fraud] are because they want to take power,” Win Khine said.

“They want to disconnect the citizens [of Myanmar] from the overseas community … they’re worried about losing their power.” said Zaw “Sunny” Khine, who also attended the protest in Owensboro.

Zaw Khine told Owensboro Times he has relatives in Myanmar he tried to call on Friday and Saturday but was unable to reach them.

Owensboro resident Gennie Kyaw said her father who is in Myanmar only has access to one telephone line via a service called Telenor, but he was able to reach her. Kyaw said when she heard that the military in Myanmar was arresting protesters she tried to send messages to contacts back in Myanmar but she had no way of knowing if they were received.

Kyaw said that the Burmese communities from all across the United States — including San Francisco, Nashville, Bowling Green, Louisville and Indianapolis — are protesting to bring awareness to the U.S. government.

Zaw Khine echoed Kyaw’s statement: “We want the U.S. government and worldwide governments to know we need to save Myanmar.”

In a statement issued on Feb. 1, U.S. President Joe Biden said, “The international community should come together in one voice to press the Burmese military to immediately relinquish the power they have seized, release the activists and officials they have detained, lift all telecommunications restrictions, and refrain from violence against civilians.”

The parallels between the November elections in both the United States and Myanmar are not lost on Kyaw, but she noted the two governments are quite different.

“Our U.S. Constitution is very strong and over there it’s not strong enough. It’s like a rubber band,” Kyaw said, also noting that in the United States the military is composed of citizens but in Myanmar they are essentially a different class of people.

Win Khine agreed that the United State’s “strong institutions” are where the countries differ. He also claimed the Myanmar military discriminates amongst its own ranks.

“The country is like 85% Buddhist … if you are Christian or Muslim you cannot get a high official position,” Win Khine said.

Many of the protesters in Owensboro channeled quotes from Suu Kyi in their chants and posters, such as “Please use your liberty to promote ours” and “You should never let your fears prevent you from doing what you know is right,” while others used the #FreeOurLeader, #SaveMyanmar and #PrayForMyanmar hashtags.

Kyaw said the group hopes to partner with the Owensboro Human Relations Commission in the future to continue to get their message out to the public.